Shock infantry is a funny unit type - basically 1 pop unit without a horse which suppose to behave like weaker and cheaper cavalry. Because of their fragility other units usually have smaller multipliers agains them. 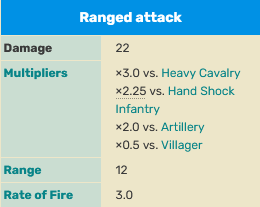 But the rule is not applied to Light infantry. All Skirmishers/Abus Gunners/archers/… have the same negative multiplier against Shock Infantry as for Heavy Cavalry. 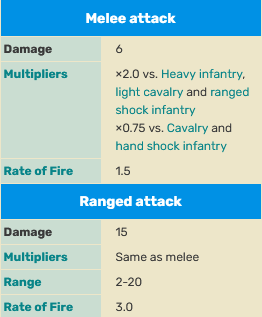 Moreover Shock Infantry usually have smaller range resistance (10%) compared to normal Heavy Cavalry (20% for Hussar, 30% for Naginata Rider) which puts them at even more disadvantage against Light Infantry.

Overall, I think Light Infantry overperform in fights against Shock Infantry because of these 2 reasons.

the smaller model also mean shock infantry have an easier time getting on top of light infantry.
Chimu runner also have an ability to be immune to snaring as well, meaning they can blitz past covering musk.

Shock infantry do better coz of collision. Also there’s usually more of them compared to cav…

Those chimu runners, if you test them, they are one of the strongest cav in the game, equal pop wise or equal resources.

They are individually weaker so low level players tend to engage in fight with lower numbers than needed. Then the fight turns bad. Chimus need to fight all at once with double the numbers, they become very strong, losing only to cuirassiers i believe.

Shock infantry have much better pathing than normal cavalry because of their small size, that’s true. On the other hand it doesn’t matter much if they die half-way to the enemy

Chimu Runner is quite a different story because of his unique ability “Chimu Maneuver”.

all shock infantry cost more resources and have more stats per pop then hussars, so they are anything but cheap and weak

Shock infantry have the hidden stat of being utterly invisible and totally indistinguishable from other units.

Last month a friend and I figured we’d play ranked a bit. We went 14-nil. Lost the 15th, first time we got matched up vs the Inca. Also lost the 16th and 18th, matched vs Inca. We have yet to lose a game vs anyone other than the Incas.

Unit is invisible, needs a nerf.

Wish they’d make a mod where all the shock infantry was riding a llama. Would make them counterable.

Well, “more stats per pop than Hussar” is kind of misleading. 2 Coyotes deals 36 melee damage in total which is more than 30 of a Hussar, but Hussar will still output 30 damage with half life and one Coyote will deal only 18. And Coyotes die like flies under any range fire including TC fire.

Well, “more stats per pop than Hussar” is kind of misleading. 2 Coyotes deals 36 melee damage in total which is more than 30 of a Hussar, but Hussar will still output 30 damage with half life and one Coyote will deal only 18. And Coyotes die like flies under any range fire including TC fire.

Yeah but that is the trade off of all one pop units which applies for cossacks and raiders as well, which is why the tactic for one pop unit is a lot more aggressive then for 2 pop units so you maximise the damage you do ( and the take advantage of the greater stacking) before the opponent has a chance to reduce your dps

The thing with shock infantry is being as weak as they are they are literally meat shield vs a wall of cannons, skirmisher and pike unit type.

As cannons do direct siege damage, a mass of shock infantry can easy be stoped with the right combo because they ain’t even capable of connect. Wich is not the case for regular and heavy cav units.

This summed with the poor path finding the game has, makes all shock units get stucked on something.

Shock infantry probably should leave behind a slight dust cloud trail when they run. No need to be too exaggerated, one like those in AoE2DE is enough.

AoE2 is much less cluttered and the base units are all euro-centric. So, picking out the dude with the ridiculous eagle on his head is much more manageable than in AoE3 where there’s a bunch of types of shock infantry on civs where all the units are dressed in hilarious outfits. There’s a visual clutter problem endemic to AoE3 due to the way it’s designed.

is censored apparently. Really? Seriously? is Microsoft trying to teach kids euphemisms or something?