I’d like to see English in the lobby browser as much as possible (or whatever language I have chosen for that matter). Lobby browser filters showing in 10 different languages is annoying and confusing.

While I understand that the name of each lobby will always be in the host’s language (and should be, as long as the host gets to name it), everything else in the lobby browser (such as Location (map), etc) should be automatically translated in the language I have chosen, not the host’s language. For example, I have chosen English. I want to see Arabia in the map filter, not both Arabia and Arabien or some unreadable russian characters… Hosts should still see everything in their language for sure, but people browsing the lobby should also see it in their selected language.

Localization is a nice to have feature. It should never interfere with anything else in the game though, especially with usability. The unranked lobby browser is unreadable right now, because it is full of words in every and I mean EVERY language imaginable. The screenshots speak for themselves; Please no more “Zufallslandkarte” whatever that’s supposed to be 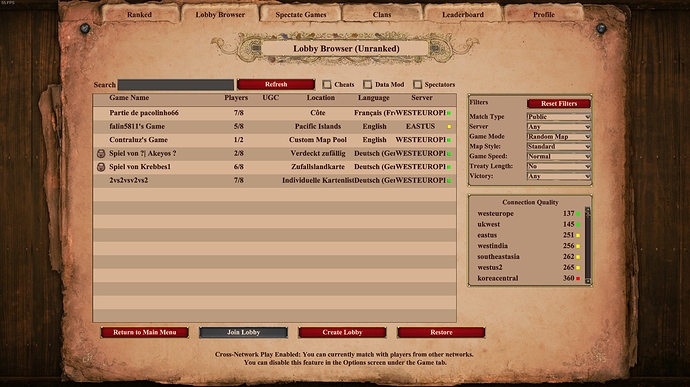 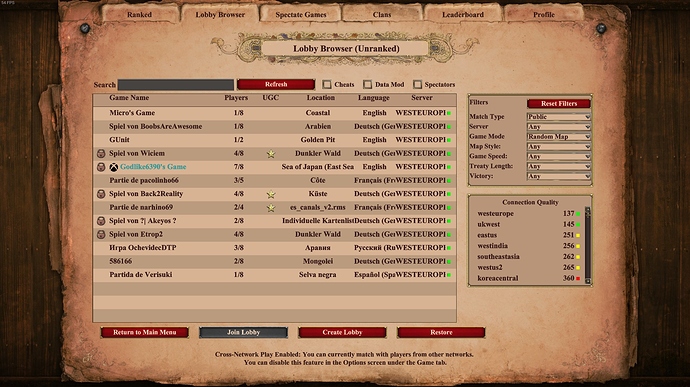 Speaking of multiplayer and lobbies, a few suggestions;