As someone who plays strictly single player supremacy with 7 AI players the AI has been a glaring issue for me since release and with the release of this DLC it has gotten worse. Allied AI players will barely build anything while their villagers will wander around aimlessly (oftentimes halfway across the map) again barely gathering anything. I’ve noticed they don’t even gather their starting crates a lot of the time. The enemy AI is relentless which is fine but when I’m trying to defend everyone’s base including my own the experience isn’t very fun. I’ll even go as far as to say it is now unplayable. Before this DLC the AI was at least somewhat competent but so far I’ve lost every single match I’ve played (5) due to bad allied AI. Please fix this.

I’d really like a patch dedicated to addressing the AI. Has anyone else seen a degradation of AI in their games?

Agreed the AI is quite bad as ally.

Devs really need to address this.My one criticism about the game so far is the AI and now it has just gotten worse. The devs have done a great job with everything else but the AI really needs work.

AI dont help me when I give signal.

Can a dev please acknowledge they will be looking into this? it really has sapped my enjoyment of my favorite game and great DLC. 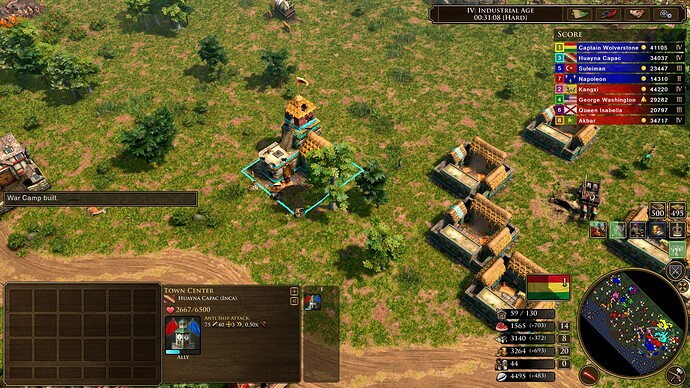 As you can see this is all the Inca AI built after over 30 minutes of gameplay and successful defense of his base by me. No military buildings were built. My allies weren’t much better and eventually got steamrolled after a constant wave of attacks.

The allied AI wasn’t this bad before.

This problem doesnt seem to be with euro , asian , warchiefs civs. Was playing against an extreme india ai trying a new build with Hausa and i was constantly pressured , the ai had max vills by 25 mins , good unit diversity , flanked my vills in the back of my base , had 4 of the six outposts , used huntables and mines before making mills etc.

yes somehow the AI is getting worse then better, which is strange. it needs work.

The AI sometimes “glitches out”. Two weird examples I faced:

The enemy Brahmin attacked an in-base treasure simultaneously as one of its villagers tried to build a house. The moment the treasure guardian (an alligator) attacked back, the villager stopped building the house and went into the TC. The AI never built another house ever again for the entire game. This happened in Exploration age, so for the whole game it had a pop cap of 20.

Another time, the AI put all of its military units in canoes and then garrisoned the canoes in a dock. Could not ungarrison the canoe so AI did not fight, did not do anything at all with military.

Sometimes the AI will also hoard up on coin a lot to pay for mercenary shipments when I’m attacking it…yes, mercs are good, but the shipment isn’t even ready yet, so might as well put vills on other resources so you can train troops to defend.

AI villagers run around too much and work too little.