I love this option as it really makes it easy for me to play on a large 4k monitor. people who are using 48 inch LG oled TV as monitors will also be hugely benefited. it also gives a great advantage as you can almost see half of the map.

my only concern is that on max zoomed out level the top half of the screen gets increasingly washed out and bottom half gets clearer towards the bottom. which is very realistic as the perspective is angled slightly towards the bottom. and due to the clouds and dust and weather conditions thats exactly how it should happen. and i know this effect is good and is intentional to counteract the unfair advantage large screen users get with the super high end computers.

but is it possible to make it not washed out please? i have tried all settings like bloom etc, but the effect remains. 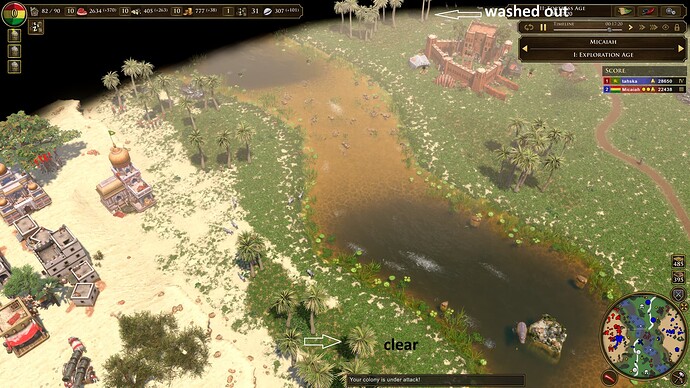 Zoom in AoE III was uncapped (or rather not-hardcoded [within reasonable range]) even in original AoE III, after modifying one .cfg/.ini file. And there, just like here, there is some built-in ‘fog’ effect separate from normal fog of war. It has nothing to do with graphics options, just a feature like a normal black layer over unexplored territory.

I guess it might be possible to remove it, but I’m not sure there is a demand and/or Devs care - it’s pretty much just cosmetic effect (it doesn’t go hand in hand with the absence of shadows or anything performance-related). I guess I’d also like to have the option to disable it, to make prettier screenshots.

I have reported this issue back on PUP and the devs did acknowledge it. Although the patch has been released with this issue still present, I think they are looking into it

yes, fog was the word i was looking for. i didnt know you could tweak it, but i guess most of the config is in xml so should be possible

yes guessed that too, since they have explicitly labelled it as an alpha feature in game options, i thought maybe they need more time to finetune it. i am really amazed at how stable this patch is and the quality of content they are putting out is really great.

Here’s a better example.
In addition to the option disabling this effect, I’d actually like a second one, that enables a light depth of field instead of that milky fog. It would be a perfect option for taking screenshots on max zoom level. It’s present in some city builders and it looks awesome (especially together with ability to hide GUI). Results would be very picturesque. 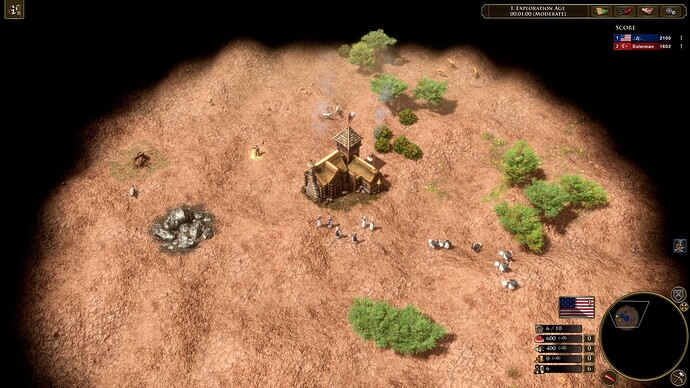 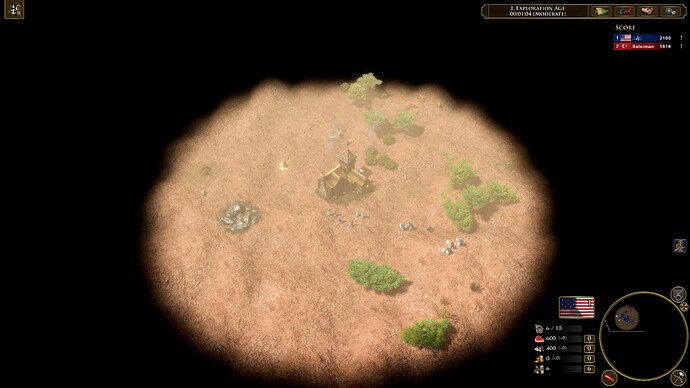 this dosnt happen on all maps. i played on great plains and it was crystal clear. i think it only happens on maps where there is a lot of dry land and dust in the air. 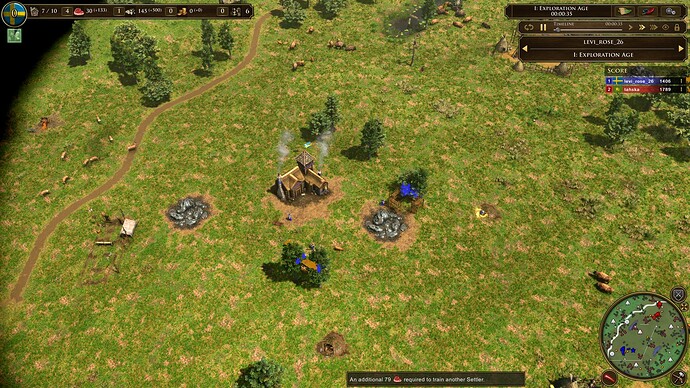 That foggy thing is intentional. In addition, that zoom level is only intended to give a broad overview of the situation, or just to be there as an addition.

yea i know thats how it should look because thats how i’ve seen it in real life from hot air baloons and aeroplanes. but i was hoping to get an option in the UI to reduce the fog. you can see from the two below screenshots it makes a huge difference in some maps where there’s a lot of dust in the air

I think the fog was there all along but the camera wasn’t high enough to see it.

This should be an easy fix, the Devs could just move the fog height in relation to the camera position.

An option to completely get rid of all fog would be great. I like to play all the way zoomed out (I have a 90" display so its no problem at all, and very awesome) and it is quite foggy for me, hard to see my units (not because they are too small, they aren’t, because of the fog). Once this fog gets fixed this will be my main age game I will play, zoom is my number one criteria for enjoyable gameplay. Almost! So excited!!

What envy! It must be epic.

I would like to know how do you play with a 90 inch screen. Like how far do you sit. Is it a projector, are you a hammerhead shark?

I sit about 8 feet away and I have a chair with a swivel desk built into it that is the perfect size for mouse and keyboard. Its an LG tv. I do all of my computer stuff on it, not just games. It has 4k resolution and there is even a mode built into the tv for pc gaming specifically (supports higher refresh rate). Its not even that expensive. I don’t get the hammerhead shark reference I guess. It is a slightly lower field of view than when watching a movie on a vr headset like oculus quest. You could use a gaming projector as well and I know many people do. Everyone has different gaming setups, so its nice when devs give players options instead of assuming everyone is using a 14" laptop screen. As the AOE3 devs have done!! Huge props to them.

Nice my man. With 8ft I think you wouldn’t need to move your head that much. Is it an oled? Don’t you get burn in due to the fixed UI elements.

A hammerhead sharks eyes are very far apart giving it a huge field of vision. 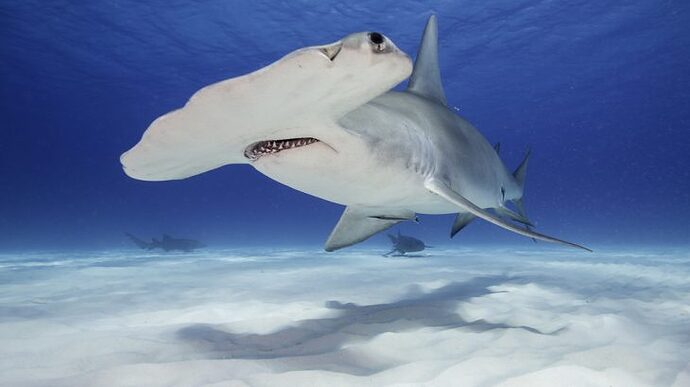 Apparently on AOE1 DE it is possible to zoom out to include ALMOST THE ENTIRE MAP!!! And there is no fog either. Would be so incredible if this were possible in AOE 3 DE, would be a dream. I wonder if all the sprites were modified smaller if it would have this effect? I know how to mod AOE 2 sprites and made several graphics mods already for AOE2. Honestly might be worth the effort if I could have the zoom level possible in AOE1. The issue is, even if this were possible, as far as I know mods aren’t allowed in ranked multiplayer on AOE3DE (oddly they are allowed in AOE2 DE though). 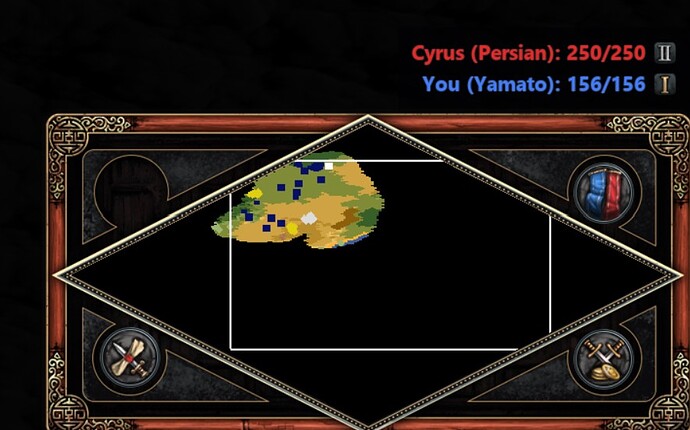 WOW. That looks friggn sweet actually. What a great zoom level. It makes me really want to play that game. Is there a ranked online multiplayer skill matching for that game? AOE1 hype! It looks like they did a fantastic job with zoom on that game, even better than the other age games. Edit: I fired up my old copy of AOE1 DE. There is an option called ‘zoom detail’. It says to select the sprite resolution you would prefer. There are options for 1x, 2x and 4x. Selecting 4x results in a ‘zoomed …

aoe3de is a very heavy game even heavier than aoe4 in some regards. Moreover disabling fog might not be possible and I am not sure if I would like it fully disabled as it adds to the effect and immersion. Since this feature is still in alpha hopefully devs will do some sort of adjustment to make it better.

Options are always better. If you don’t want to enable the ‘no fog’ option, then don’t enable it. Could be a quick and easy fix for the devs. Personally I would rather not have to deal with the chances of a foggy display sometimes.