The inclusion of Malta in the first place is questionable at best, but its implementation makes it 1000 times worse. A lot of things done with this civ make it feel like a crappy mod that was just slapped together in a rush. The argument that “reusing assets is more cost effective” doesn’t hold water when there is so much new content in this DLC that would have been more applicable to Malta than recycled campaign stuff. For example, they clearly had a radically different prototype for Commanderies with an entirely different model that was already created. 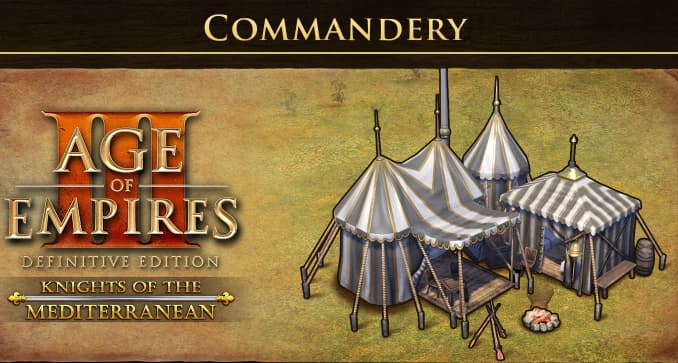 This building needs to be removed. It’s shameless asset reuse that doesn’t fit the civ and causes confusion with scenarios that have an identical looking building. It’s baffling how anyone thinks this building fits the Maltese theme.

Screenshot (140)1783×611 178 KB
Removing Depots would not even require the loss of its mechanics; the Arsenal could easily take on all of its functions. Arsenals could be given a build limit of 20, and the Gunpowerder Mills card could be repurposed to give them the stat boosts and explosion ability. 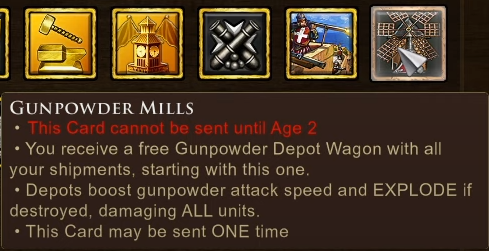 This building should be added to replace Outposts for Malta. It fits their overall archaic fortress aesthetic much better than conventional Outposts and it would go much better with cards like Fire Towers. The devs are clearly capable of making tons of quality new assets for this expansion (like pictured below), but for some reason, hardly any got used on Malta. 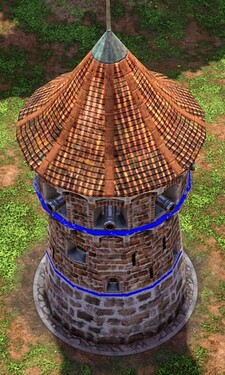 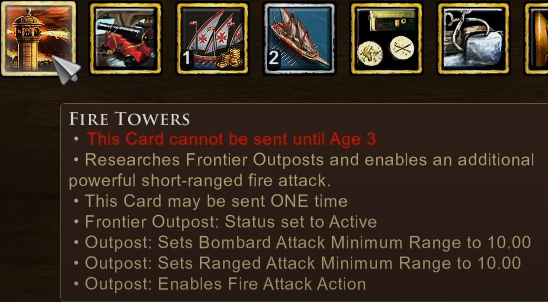 Some unit production done at Hospitals should be transferred to Battery Towers. A 100 wood barracks that trains everything and also heals is absurd. Sentinels are lookouts for enemies so training these from what’s essentially a lookout tower makes sense. The De Redin Towers card could enable Battery Towers to also train Crossbowmen, Pikemen, and Fire Throwers.

This should be a lone uber unit/building for the late game, not a standard unit that can be spammed everywhere. A build limit of 1 or 2 should be more than enough for these imposing fortifications.

If any campaign assets should be reused, it should be the giant walls from the campaign and scenario forts. To make up for a bigger footprint, these walls should have a ton of health and “deflect” some of the damage received when enemy units shoot through them. This could work similarly to the AoE2 Hussite Wagon.

Having both the Rockets and Flamethrowers cards to give two very different charged abilities to Fire Throwers is quite excessive.

Fire Throwers should be limited to the Flamethrower ability, and the Rockets card should be removed, or reworked to just ship the existing British Rocket artillery unit. The rocket charged ability would then be limited to Sentinels after Flintlock Rockets is sent. 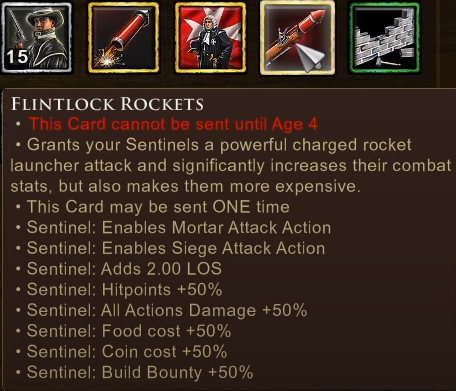 I do agree with that they could have reused those walls and the cool looking towers, but otherwise malta looks like a great civ.

Their whole design is just perplexing. It’s like they went out of their way to reuse the worst existing assets (weapons caches, keeps, recoloured field hospitals, regular outposts, fixed guns, etc) while disregarding all the new and existing assets that would be perfect for Malta (battery towers, giant walls, new commandery design, arsenals, etc).

They definitely feel cobbled together and the reused assets make them feel like a mod rather than premium content. I was sad those really good looking bombard towers are not buildable by anyone. Giving them to Malta for their defensive focus sounds really good.

Also, reused campaign buildings lack proper building animation.
And yeah, hospitals instead of barracks seems to be a pure choice.
Home city, as far as I can judge, also relies heavily on reused assets.

Maltese, despite small historical relevance, may prove to be very fun to play, but they really need to be improved. Thre reason why inclusion of Malta ISN’T THAT ABSURD.
Also they had some colonies in Caribbean for a short while.

Hospitaller colonization of the Americas

The Hospitaller colonization of the Americas occurred during a 14-year period in the 17th century in which the Knights Hospitaller of Malta, at the time a vassal state of the Kingdom of Sicily, led by the Italian Grand Master Giovanni Paolo Lascaris, possessed four Caribbean islands: Saint Christopher, Saint Martin, Saint Barthélemy, and Saint Croix. The Knights' presence in the Caribbean grew out of their order's close relationship with the French nobility and the presence of many members in...

So they fit in the OG sense of colonies anyway.

Hospitals are perfect for Malta considering that’s how their order started as- you know being Knights of HOSPITALLER! They started by healing sick and Elderly in Kingdom of Jerusalem.

Did you even read this post? It’s not about Malta being a terrible civ choices (which it is), it’s about the botched implementation of Malta.

I never said having hospitals is a problem. I said having a 100 wood building that heals and trains all their infantry is stupid. Hence my suggestion to move some of the units it trains to Battery Towers.

It’s not about Malta being a terrible civ choices (which it is),

Its not though? It had colonies and was important in Mediterranean sea history.
How is it terrible again?
LEARN HISTORY BEFORE SPEAKING!

I never said having hospitals is a problem. I said having a 100 wood building that heals and trains all their infantry is stupid.

But hospital fits thematically. They started as basically a combat medic- unlike their more combat focused Knights Templar.
Where else would you put hospitals in the game?

@M00Z1LLA You got a big dislike from me. Shame on you man…

they hated his message because he spoke the truth

Hospitals are okay thematically, but what they have created here does not seem balanced and should be more expensive or more limited.

It would have been much more simple if they had just given them a regular barracks and Hospitilars had the ability to construct field hospitals, but there are bigger problems with Malta than training from a hospital.

I don’t know those seems to be pretty minor nitpicks and fans seems to be happy with what we have.
Plus we have whole new HC and new voice works for the civ so that’s a plus in my book. they aren’t speaking in archaic English for some god damned reason like in Campaign.

fans seems to be happy with what we have

I seriously doubt that, the reaction to Malta seems mixed at best. It’s a poor civ choice that is poorly implemented. At least with other questionable civ choices like USA and Mexico, the implementation was excellent.

If the Malta civ was a standalone thing instead of bundled with a bunch of good stuff, I wouldn’t be surprised if it lost money.

I seriously doubt that, the reaction to Malta seems mixed at best. It’s a poor civ choice that is poorly implemented.

where is your poor reaction. Everyone seems to be happy with what we have. some even saying they will play Malta first before Italy in this DLC

Only one more day III - Discussion

Malta! Italy is great. But the Malta defense mechanics have me hyped!

It seems to me more like a complement to the DLC and a fulfillment of the requests that they liked the campaign of the ‘Black’ family. I don’t know much about history and I don’t know how relevant it really was, but I appreciate the new content. If there is room for improvement to give more historical precision, that’s fine.

I know the history, and I stand by saying it is a poor choice.

Malta is a pirate crusader order. It’s closer to things like the Republic of Pirates or the Teutonic Order, and pales in comparison to European empires like Poland, Prussia, or Denmark.

They’re notable for the propaganda surrounding the great siege, but they hardly stopped the Ottomans who were at the gates of Vienna 100 years later. It’s not even all that impressive when it comes to the Ottoman incursions into the Mediterranean. The siege of Candia was much more intense.

But it is in the game now, so the best that can be done is to make the design of the civ not something that looks and feels like it is a rushed mod which is what this post is about.

But it is in the game now

If by “now” you mean the original release in 2005, then you are correct.