When you attack ground and delete the mangonel, all projectiles acts as main projectiles in its (the projectiles) targeted radius instead of it doing linear damage scaling across its radius, it deals full damage till half radius. 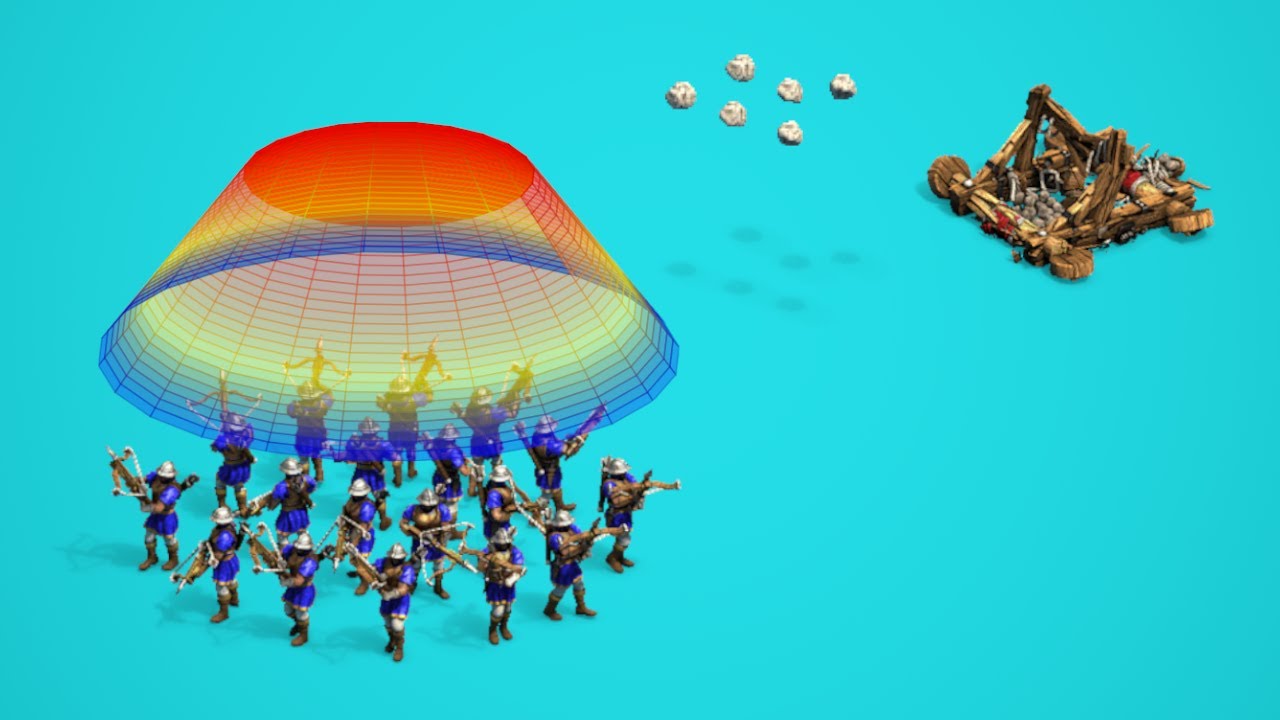 It’s been known. And it works on any elevation, it doesn’t need to be level.

It’s common as a high-risk, high reward technique by top players who sacrifice the mangonel right after firing instead of trying to micro it and save it for another fight in the hopes that deleting it will give them way more value because the shot was so good.

This wasn’t known till recently when someone discovered it and posted all the info about it on a thread. The hill could have been fine as, usually, it involved vs other mangonel but this isn’t an acceptable behaviour.

Interestingly, this behaves differently on chu ko nu, longboats and organ guns: If a chu ko nu dies while the arrows are midair, the secondary arrows do their regular damage, but the main arrow is completely negated. Longboats however are not effected by being destroyed, and their arrows all do their regular damage. Same goes for organ guns. Apparently, only the mangonel line magically transmutes their secondary projectiles into main projectiles on death.

So I heavily recommend: Do not delete your chu ko nu!

Tried also to check out the kipchak?

I totally forgot about this ridiculous mounted Legolas unit… Kipchaks behave like longboats and organ guns. So also not worth deleting (at least not because of that reason

When you attack ground and delete the mangonel, all projectiles acts as main projectiles in its (the projectiles) targeted radius

That’s not exactly what happens, it’s more complicated than that. All projectiles, primary and secondaries, behave in the same way. The thing that changes is how damage is spread over the blast radius, with more damage in the center area than it is supposed to.

I just thought today for a “lore” explanation of how it could make sense:
You fire the mangonel with more power than it could handle, breaking the mangonel but creating an extra powerful final attack

The Timeline doesnt quite make sense ofc since the deletion happens “too late”, but hey maybe thats a mechanic that breaks the chronological flow of time Kappa

T-West made a video about this

Thanks for posting the video and thanks to T-west for being clear although we still don’t know why.

That’s up to the devs to look into, but I can imagine there is some custom logic to calculate the damage output for units that “are no longer there”.

It is a well-known issue and has been used by top players for some time now. I agree that it should be fixed.

As far as I know, not even the top players knew of it till a recent thread popped up explaining everything and then , after that, Hera used it in game and went ‘viral’ in the aoe community.

Well, he knew the “delete trick” (as he calls it) for months and used it often in castle age in mangonel vs. mangonel fights. A recent example, where he killed all the plumes went viral indeed, because it’s such an extreme example.

The delete trick was vs hill bonus; A mangonel can’t one shot another mangonel on hill but if deleted, the projectiles forget their original origin and don’t apply the reduction of damage for hills and deal all of their damage. Nobody deleted their mangonel while on the same altitude.

@RoomOfTheEvil
Not in a mangonel fight usually, but against archers people do it all the time, because it improves the damage spread, it doesnt make the actual spread bigger but it makes it deal full damage on a much wider area inside the total damage area

Why does it need to be a bug though? It is quite balanced in its use, you need to literally kill your mangonel, 160 wood 135 gold, for one single shot with a slightly bigger maximum damage area.

I think it makes sense for the devs to address it to clarify wether its a bug or not, but for example just adding a big “crank” sound for the deletion when someone uses it could be enough, with the explanation that the mangonel “overclocked” and fired so ■■■■ hard it shred its own machinery to pieces. (dont mind that the attack with overexertion and its order to do so break the spacetime continuum)

So imagine it is the same for the Trebuchete, will you delete it to destroy a castle?
Pro players are using this bug to make the last shoot extra powerful, they won’t delete it any time under any circumstance unless they know the mangonel will die and there is where I think it is an unfair situation that should be addressed
IMO

Trebuchet has 200 attack… the castle like more than 4k hp.

What do you mean “it doesnt behave like this normally”? I agree that it made it into the game as a bug, but there is nothing wrong with just keeping it as a feature now since it has a good risk reward tradeoff and the benefits are usually not that impactful