I feel like the matchmaking for TG, and EW is a bit poor, because

So I propose we homogenise all the ratings into one rating per player… Is an amazing 1v1 player really going to be a noob at TG? Critically, the 1v1 ratings are alwayssss so much more accurate than any stupid TG rating…

Once all the ratings are combined into one rating per player, I think 1v1 games should carry more weighting and contribute more than TG results.

(Side-note: I am very grateful the Devs are starting to make some changes to ELO and matchmaking but there is so much more to do! Also I personally don’t mind the huge skill gaps we have currently in TGs… if the playerbase wants to keep this that’s cool? Like now in TG you can get 900 ELO players and 1500 ELO players playing together. Which can be fun only IF the teams are balanced…)

Finally, after we homogenise all the ratings into one true rating, primarily weighted on 1v1 performance, then I think we could change the UI to be more space efficient (and introduce a Castle Age start mode!!) see below 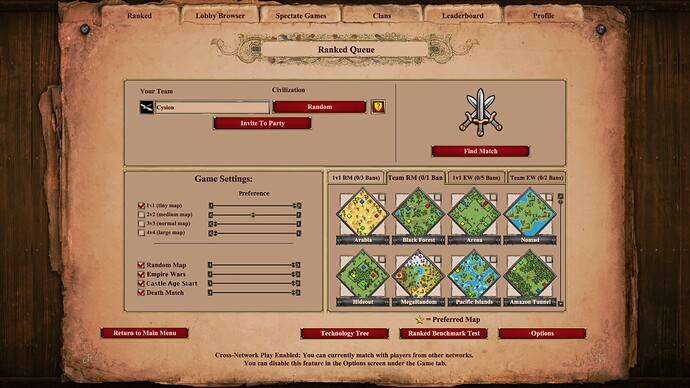 all the ratings into one rating per player…

You are joking right? Literally the worst idea

Why don’t bigger more popular games do this? Think about the numerous downsides to this

What are the downsides?

Many/some people that play TG don’t play 1v1, how would you determine their real 1v1 elo?

Yup. TG and 1v1 are two totally different game with same unit and civ. As a TG player, I can tell 2v2, 3v3 and 4v4 are also totally different (ofc still similar to each other compared to 1v1). I agree to separate TG elo and 1v1 elo

You can just use their TG rating, but then if they play a 1v1 then that is a more dominant factor.

Yes civs and units perform a tiny bit different in TG and 1v1, but I’m not talking about that??

I think that if they go 1v1 then use the 1v1 elo rating.
If they go TG then use the TG rating.
What is the point of making a composite score?

I am a TG player, In my expensive something we beat enemy with solo rank 1600 but TG rank 1200. Because they are just bad in playing TG game. Same as some guys with solo rank 800 still beat us with their superior TG skill.

No it is not the case. TG and solo are not just tiny different. Try to grab 3 friends and go for some strategy like springboard and dark age 4 scout

Yeah i agree. TG and 1v1 are completely different, the meta is different. Just because one player is 1# in 1v1 doesn’t mean he’ll be 1# in TG. And 2v2 TG is different from 4v4 TG lol Even though the game is the same, the strats are different there too. But anyway, I think the best thing for TG and 1v1 is to block family shared accounts from playing ranked. That would help stop many smurfs, and the matchmaking would be much more balanced. But i don’t see it happening