Maybe an unpopular opinion: AOE3 does not need a techtree

AOE3 does not have “unlocking” relations other than age-ups, unlike previous AOEs (e.g. barracks unlocks stable, wheel unlocks chariot). Nor does it have units with different numbers of upgrade (e.g. some units can upgrade twice in the last age in AOE1/2). The upgrades are pretty linear and uniform.
Thus arranging everything into a tree wastes a lot of space. What would work better is the AOM tech “tree” which simply shows the units and techs unlocked by each age. 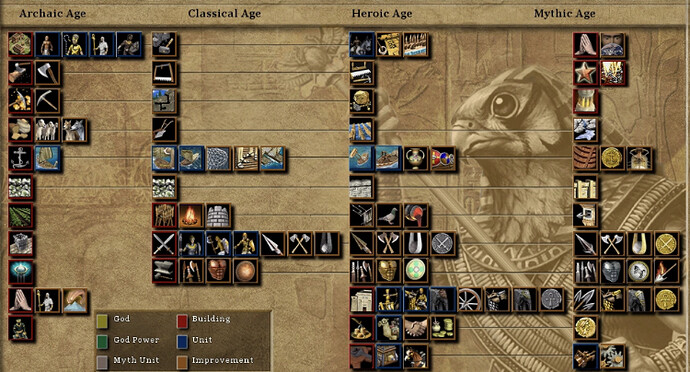 image750×405 406 KB
And a better description of the age up options and their effects, which is the core factor of civ differences.

And a “card tree” like in vanilla where similar cards that affect/send the same type of units are groupes together.

These will make the civ differences easier to understand than the current info panels.

I don’t like how the tech tree currently looks either, but I don’t think that the AoM example you used would necessarily be better. I think the optimal balance is somewhere in between.

I do agree however that concepts like Aging-Up and Revolutions are woefully under-explained in the tech tree.

I would like to have a unit builder, just like the one Project Celeste made for AOEOL （https://unitstats.projectceleste.com/)
which can found out what stat could a unit get after applying cards and technologies

I’ve spent many hours thinking about tech tree representation. The AoM in-game tech tree - not my preferred style and not the prettiest, but the current implementation in AoE3DE is barely usable, and replacing with the AoM style will be an unambiguous improvement.

You also overlooked a potential benefit: all our in-game tech trees outside AoE4, including AoM itself, have been handwritten. Writing these has been a laborious, error-prone process. The AoM style is simple enough it can be auto-generated, at least in theory. All we need is a generator that knows how to parse AoE3’s titan-sized cobwebs of tech prerequisites with all the “same unit, different proto” and “different units, same proto” hijinks

The auto-parsing gets even harder, if the tech trees also must show (and denote!) options unlocked by shipments AND units only available via shipments, which it absolutely should, as many of these are essential. You can’t have an Ottoman tech tree that doesn’t show Spahi.

Aesthetically, whether generated or handwritten, your results will look uglier than AoM. Techs in AoM are fairly regularly distributed over the ages, giving your example a clean “rows of items divided by category & age” layout. AoE3 is a lot messier, with many “breaks” and single-age clusters:

That’s not counting the current AoE3DE’s messiest part, the bunch of Tavern units in every tech tree

Speaking of that, I feel AoE3DE definitely can use a hypertext encyclopedia UI that displays useful gameplay info, available during gameplay. Ideally also functioning as a unit builder. But with AoE3DE, memory footprint might be an issue.

AOE3 does not have “unlocking” relations other than age-ups. Nor does it have units with different numbers of upgrade (e.g. some units can upgrade twice in the last age in AOE1/2).

There’s the Mexican revolution chain. AoE3 also has units that upgrade in the same age they unlock (Mortar and Horse Artillery), and the Capitol’s Knighthood->Peerage tech. But yeah, these are minor exceptions.

And a “card tree” like in vanilla where similar cards that affect/send the same type of units are groupes together.

Yes, I’ve thought about that too. In my own UI proposal document, tech trees are handwritten (for aesthetics), but card groups are generated, since they are all equal-ranked and in 5x4 groups (except for a few new cards that replace themselves).

Yes please! The AoM tech trees were the best IMO.