Considering that the person I want to message to (@Siegelad4112) has a private profile and I don’t want to put an off-topic comment, the only option I saw was creating this thread. 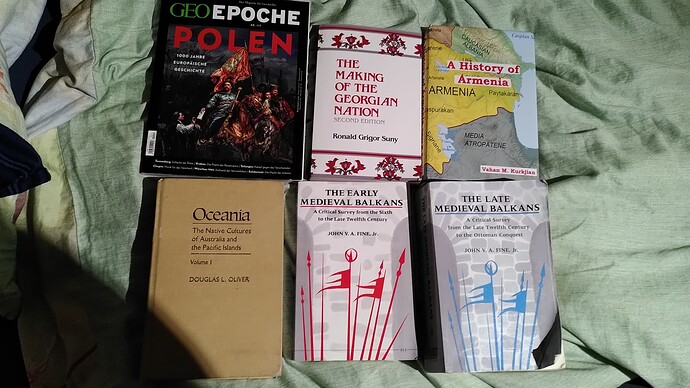 I’m definitely not only interested in African/American history, but considering that I’ve read quite a lot about Eurasian history/culture already, I’m on a non-Eurasia history/ethnology reading tour.

Some other books I’m going to read on Caucasian history which I haven’t read yet:

Ossetians, snaisahcbA and srazahK (read reverse) are not that easy to find books about which are not extremely expensive or very thin. Some suggestions in English, French or German would be nice if you can suggest something.

Do with this information whatever you want.

I take care to be informed when it comes to history

I hope that we can reset a bit our relation on this forum.

We just have both different opinions on what should be the next civ in-game. Especially considering that we’re not sure if there’s a limit or not, the arguments can get kind of heated.

The thing I’m thankful of you is that you’ve motivated me to read Eastern European a bit more extensive than before. History is something which can get instrumentalized to do terrible things in the wrong hands. On this topic, Ukrainian and Polish history is surprisingly similar

Aw I’m glad. I need to read my big Ruska (non fiction but based around real events).
However I can’t focus enough on reading now as much as I’d like to ¯⁠\⁠_⁠(⁠ツ⁠)⁠_⁠/⁠¯.

I think you’re missing the part where the Ukrainians are fighting against their neighbours because they don’t want to be under guardianship of anybody else, like the Poles.

I don’t remember that ever happening tbh. It would’ve been part of the Russian empire when that happened? Idk

Nice, My local library barely has anything outside of Roman history which sadly gets over-taught

Also yeah sorry for being quite aggressive, My personal interest in the Caucasus has been since LotW as I’ve seen comments saying that it would’ve been a better choice than Burgundians and Sicilians…I think we both share a common disappointment from this AoE1 port to AoE2DE that could’ve been a massive AoE1DE update instead of being done as a “DLC” (taking the same pattern of the usual formula of a regional DLC). But for someone like me who hasn’t fully played AoE1 (Not a big fan of the limited gameplay) I’ll give it a try. Hopefully after it, 2DE will continue to have support for more DLCs without the so-called 48 limit which most keep arguing about as there’s still room for more.

PS: I was a Wars of Liberty intern for a short time and my main work was on the African natives which was fun to learn and challenging with finding sources for a few ones