Message to the Devs: Be careful in adding new civs

I think the Italians are an exquisite platter. The excellent navy, trade, gunpowder and full hussars represent Venice, unique units and archery range units represent Genoa, Condottieri and full cavaliers represent Milan and Florence, aging bonus and monasteries which only lacking heresy represent Rome, etc. So that I regard the separation of the current Italians is no necessary at all.

The Bohemians are separated from the Slavs rather than from the Teutons. The fact that the Teutons represent the German HRE is no any change.

Current indians is a odd civi the tech tree is mugals wonder is from vijayanagar monastery is based on bengal architecture so one can consider all indians lumped together in one just like italy or slavs.

The Slavs were introduced in the very same dlc as Indians

The dev and people had not anticipated the release of the HD and the DE at the time AoFK was created, just as when the dev set the War Elephant as the Persian unit, they did not expect the introducing of the Indians and Southeast Asians.

The Huns actually represent them very well. In my opinion, the Huns should cover the Avars or they would have too less contents.

On the other hand, the Göktürks are the 3rd and last Turkic group worth independence I consider. The Tatars and they could well present the medieval Inner Asian Turkic forces while the current Turks already have enough contents to specifically represent the Seljuks and Ottomans.

The Göktürks would focus on the khaganates rruled by the Ashina clan in the early Middle Ages and the East, and specialize in hunting bonus such like the huntable animals contain more food or the hunters are able to submit the food directly. Their heavy cavalry UU may be named “Fuli” or “bori”, mean “wolf”, who were imperial guard corps of the ruler, able to keep moving, attacking and sustaining damage for 3 seconds after HP down to zero. Perhaps there may also be a bonus making heavy cavalry archer upgrade free.

Comparing to other settling civs, there are only 6 nomadic/semi-nomadic civs in the current game. I think there is still enough potential and creativity to design some new steppe civs. After studying, you may find the difference between them. For example, the Göktürks value rapid aggression and scouting, the Sogdians value trade and religion, the Khitans value diplomacy and refugee admissions and espionage, the Jurchen value heavy cavalries and Chinese firearms, etc.

PDF | This article is a tour de horizon of the origin myths that were recorded in the Chinese dynastic and other historical works written during the... | Find, read and cite all the research you need on ResearchGate

Current indians is a odd civ

That is why people suggest separating Bengalis and Dravidians from them.
The Italian city-states are very close geographically, inseparable politically and economically, sharing the same language, religious beliefs and culture. The difference between the Indians is unmatched by the Italian city-states in my opinion.

I don’t see why would adding more civs disrupt anything. Maybe only to pay attention not to make new civs OP and that’s that. AOE2DE is pretty much the same game since it was made, with some cosmetic upgrades as several people already mentioned.
In my opinion adding more civs is actually refreshing the game not clogging it. Just imagine if there were only original civs from the beginning, the game would have been abandoned by many people long time ago.
There are a lot of civs that could be added from Europe, Asia and Africa, and only people’s preference determines which ones should be added sooner or later. In Europe there are still Serbia, Switzerland, Wallachia, Venice, Georgia, Armenia, (if you count Caucasus as Europe), in Africa there are Nubia, Kanem-Bornu, Kongo, Ghana, etc, in Asia there are so many civs worth adding, starting with breaking India umbrella…

My point is, even if there were 100 civs that wouldn’t break the game especially for casual players, even some pro players who need to know every civ to compete welcome new civs. DauT among them… 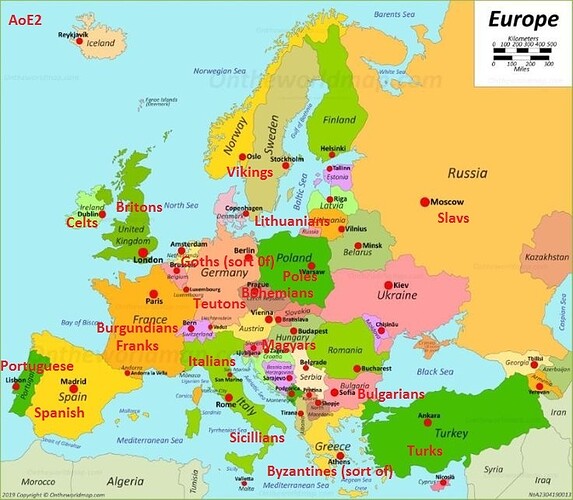 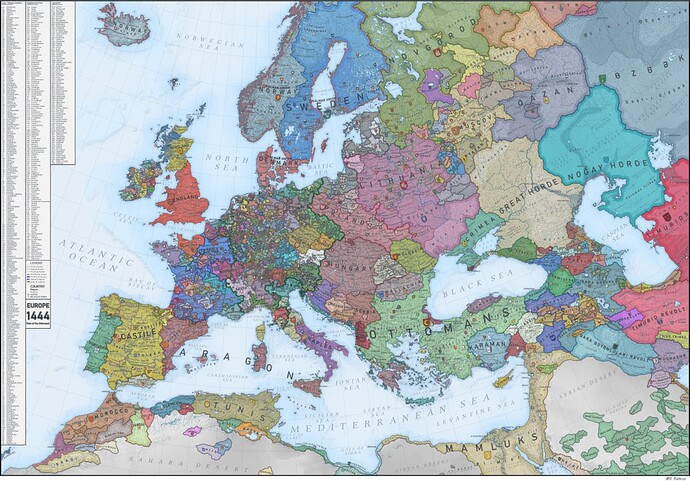 We don’t need new civs. We need fixes. It is pretty terrible that the Devs still dont have fixed the TG ratings, which are terrible since release for example (see Analyses of the ratings - Spotting the issues). Things like this should get more priority compared to new civs.

Getting good new civ designs is also difficult. Most new civs are badly designed. They are a copy game play wise of an existing civ or they use gimmicks to make the civ unique. Both aren’t great designs.

This is the dev’s duty, they should fix it, but it is also a complex math problem, not only difficult but also unable to bring income even if it is fixed. The development of new civs is also a difficult task that requires creativity and hard work, but it can bring substantial income.

The quality of civ design cannot be summed up in a nutshell. When the structure of the tech tree of AoE2 is so fixed, it is impossible to expect the new civ to be such as “unique and novel” as AoE3. However, the introduction of new elements such as charging attack, generating resources when attacking, becoming another unit after death, non-villager units can construct, etc. brings new possibilities to the future of the game. Even the Flemish Revolution and the First Crusade, which are often complained about, still have their strategic value. In fact, the usage of them is not uncommon compared to some UTs of other civs.

Several recent new civs are often said to be copies of existing civs, but they do carry new meanings. For example, the Burgundians cover the Low Countries and the Sicilians cover the Normans and Crusader countries. The Poles and the Bohemians even have almost completely different strategies from the Slavs and the Teutons.

In short, when the new civ will not be disgusted like the Teutons, Turks and Koreans in the past, I think it is not a failed design anymore.

This is the dev’s duty, they should fix it, but it is also a complex math problem, not only difficult but also unable to bring income even if it is fixed. The development of new civs is also a difficult task that requires creativity and hard work, but it can bring substantial income.

A better MP experience leads to selling copies of the game and DLCs. So over time it will generate money. I haven’t buy the latest DLC, but I will probably buy them if the put more effort in fixing stuff like the TG rating.

Rest of the post seems like proving my point of news civs being a copy of an existing civ game play wise or having some gimmicks.

Can you stop getting into every civ thread to say the same thing?

Rest of the post seems like proving my point of news civs being a copy of an existing civ game play wise or having some gimmicks.

My point is the new civs always have something fresh, interesting and worth expecting.

IMO there’s nothing wrong with adding new civs, it’s a good way to keep the game fresh. There’re still many important civs missing in Asia, Africa, and the Americas.

An oft under appreciated aspect of new Civs and their Campaigns is how they add new assets that can be used in the Scenario Editors, a really good example of this is the Hussite War Wagon, as there are countless examples throughout history of wagons being used as a defensive wall (The Bohemians being just the most notable users of the tactic), but prior to DoTD there was no good way of representing it ingame. As generic Palisades cannot properly communicate the “Wagon” part, and the War Wagon unit is clearly just a carriage
whilst also having the horrible eyesore of the horse that cannot be removed in the Editor. It also just works wonderfully well as an alternative palisade that provides an incentive for using your units defensively thanks to the ranged damage halving effect it has.

The Screenshot below is an example of what I’m talking about from a FilthyDelphia scenario. It’s specifically depicting the siege of the palace that Cortez and his men were stuck in 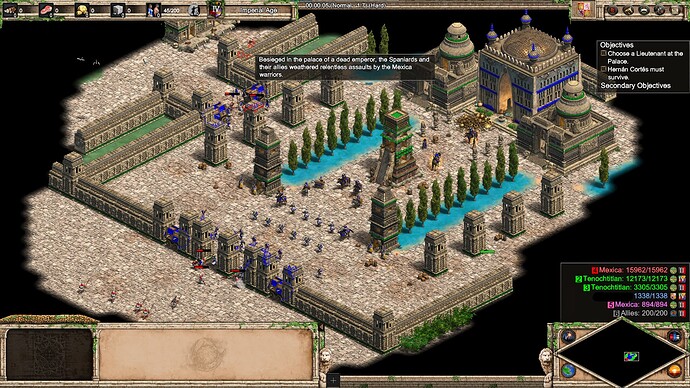 The true quest in the adding new civs is in finding out if they truly had independent traits in their culture, military, society, government, to easily distinguish them from current civs, not in just taking one or two differences with other civs and calling that “enough” to make them their own civs.

As I have always said in these Forums: I am all for adding new civs, but make them right and make them fit well into a game that is already bloating with many various civs.

In my opinion adding more civs is actually refreshing the game not clogging it. Just imagine if there were only original civs from the beginning, the game would have been abandoned by many people long time ago.

While you are not inherently wrong, adding too much content can over expand a videogame too much. Like when a restaurant in my hometown was very successful and business was flourishing. Then the owners decided to expand their restaurant by opening a new location in another area, only for their business to then start to slow down with the increased costs and maintenance.

In a similar vein, adding more civs will add a whole boatload of maintenance cost:
balancing with other civs, balancing the civ for maps (land, water, mixed maps), more bugs and glitches to root out and destroy, reshaping the AoE2 meta, affecting future Age of Empires tournaments, et cetera.

It is easier to say “YES!” Let’s add new civs!" then to actually do it.

I hear you, it makes sense not gonna lie, however i still think it’s not that case here since the civs aren’t so much asymmetrical like in AOE4 or perfect example would be Starcraft where it would be impossible to make so many civs. Here only bonuses, upgrades and 1 unit is the difference. I’m not saying it’s nothing, just saying it is not too big of a deal, unless they want to add new mechanics all the time which is tricky.
Balancing would be needed with or without adding more and more civs because from time to time players find new metas and gaps in gameplay which they can exploit, on the other hand new balancing gives way to new metas and gaps so it keeps the game interesting and evolving, which is a big reason why some games survive the test of time and some don’t, so in my opinion adding new civs just speeds things up…

I’m not saying it’s nothing, just saying it is not too big of a deal, unless they want to add new mechanics all the time which is tricky

This is why I’m heavily against auras or activated abilities. New mechanics can make balance a mess (look at FC/FR from lotw). Better to just avoid it.

Dislike auras or activated abilities in AoE2 too.
The existing mechanics in the current game are already enough to make many different civs I think.

About 60 civs is nice max number of civs finally I guess.

You should be very clear that when people are talking about the number of civilizations, they are essentially talking about an ideal situation, so it should be assumed that there is an ability to break through this limit.

However, as an opponent and conservative for new civilizations, the limit originally has nothing to do with you maybe.

Source on this please