ISSUE EXPERIENCED
I’ll attach a screenshot of this bug taking place, where you can clearly see how the fog of war is completely broken even in the mini map. By broken i mean that you can see the map almost as it was already explored in certain spots (in a weird way) but without the presence of treasures, resources etc… and you can see the same thing reflecting into the mini map.

FREQUENCY OF ISSUE
The issue occurs always after 2 or 4 matches, both in multiplayer or skirmish.

STEPS
All i have to do to reproduce the bug is playing the game normally for a couple of matches until i start a new one with this bug present.

Nothing worked or changed the situation. 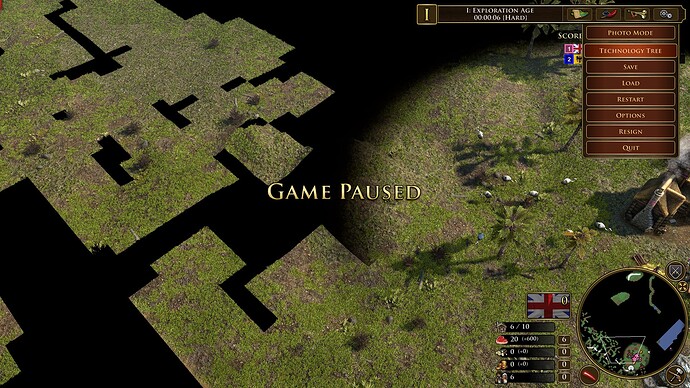 to me this feels like driver problem, not certain on it, but given i couldn’t reproduce this with low end nvidia card yet suggests to me its related to that

It’s really weird since i don’t have any problems with any other game that i own… i might need to rollback drivers?

I’ll try doing this and see if anything changes xd

I’ve probably found the reason behind it, i’ll test it during this evening (6pm for me rn) and let you guys know

oke unfortunately the test ended sooner than i thought… no luck.
but i was able to discover that this bug doesnt occur if the map has the “large map” option on!
definitely not a fix, but is still something that could help finding the problem