Hello, this is my first post here. I’m excited that the Indian subcontinent is finally getting attention by the devs!

However, due to this unconventional mapping between new civilizations and new campaigns, there has been a mix-up in the trailer! 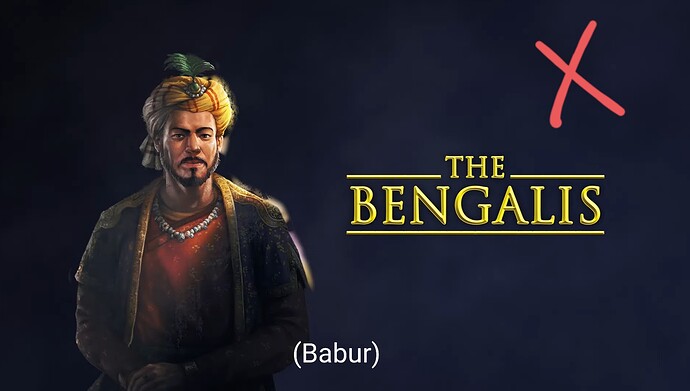 Further, the images of Dravidians and Gurjaras are also wrong…

Please fix it as it is a silly mix-up!

I also have a small suggestion, since you’re fixing the trailer anyway, can you show the Gurjara campaign hero (Prithviraj Chauhan) along with the introduction of Bengalis and Dravidians, for ease of understanding and completeness? After the intros of the three new civilizations, there can be a small clip showing Babur with a caption “(The Hindustanis)” with an indication that the Hindustanis will get a new campaign…

This is not the only error. Devapala (shown as Dravidians) and Rajendra (shown as Gurjaras) are also confused, so all three are wrong.
But hey, do I care? Not really. Looking forward to the great DLC!

Haha, true that it doesn’t matter. But the information gotta be accurate…

can you show the Gurjara campaign hero (Prithviraj Chauhan) along with the introduction of Bengalis and Dravidians, for ease of understanding and completeness?

Oh, come on, that’s not a good excuse… The Steam art shows 2 emperors, the Steam thumbnail shows only 1 emperor…

India has 4 civilizations featured today, it should ideally show 4 figures for completeness… or at least the 3 new civilizations must get a representation in the DLC poster!

Old dlcs had five civs but only 3 people in the box art.there is no fourth pic.

On a side note I do hope they give the foot prithiviraj unit an actual skin not the ARB skin.

Looks like foot prithiviraj is still an European xbow man.No new king UI sails and no fixes to old hero skins seems like a rushed half baked dlc.