Hello folks i have a problem with two of the mods still downloading and it still like that from the last 2 or 3 days to until now and i tired to remove the files of the downloaded mods and it didn’t do anything and i check my accounts on age of empire website and xbox live they where all logged and fine so how can i stop it or remove the two mods? it annoys the heck outa me and also i hope they can add a “downloading percent” so that we can know how many percent it’s now to finish or if it stuck at a certain percent instead of guessing 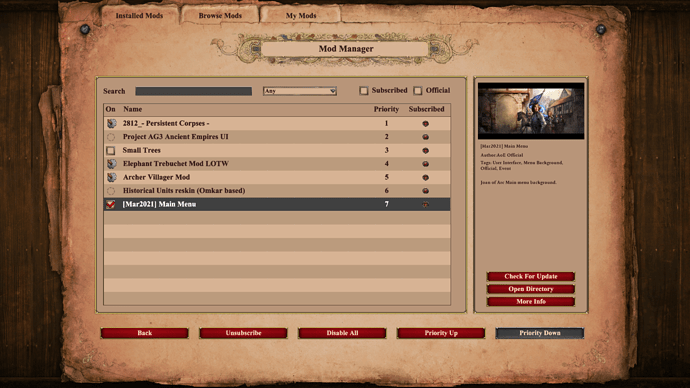 This is pretty annoying. Sometimes I quit when it’s stuck downloading, and when I re-enter the game the downloading is already finished.

not only that, the download speed is only at a measly average of 300KB/s to 800KB/s.

if you use a monitoring tool and check the average over it’s long period of download you’ll see just how slow it is.

Yeah that’s annoying and problematic so there’s no solution for that problem right?

few months ago (about 5?) prior to november update I believe, I was able to download a 380MB mod in about a minute. now 80MB takes me 3 mins, about 14x the difference…

tehcnially with a mod like omkar’s reskin which is close to 1GB, would take upwards 20 minutes and if download isn’t finished sometimes it restart the entire download. yet another thing they do not only download the difference, or download the remaining file. very poorly designed.

I’m also experiencing this problem, but it’s with a map that is only 12mb. I don’t have any other downloading issues, just on this one map. It’s been over 2 weeks now.

Maybe is a problem with that mod itself? Could you try to contact the person who made it?

Probably not sadly, it’s all written in chinese and is quite an old map. I’ve contacted support so fingers crossed they have a solution!

This is BigMac, the creator of “Antarctic Centric World.”
I saw your rating and your problem yesterday, and feel sorry that you had the bad experience on downloading the mod.
Because the mod haven’t change since last October, and you are the first one reporting the problem for downloading the mod. I’m not sure if the problem happened you faced is because of the activity AOE official held from late February to early March—the players can get many new modes during that days, you know.
I update the mod again today, you can try to download the mod again, if you still face the same problem, please let me know the details via mail (b94701122@gmail.com) or Facebook (you can search the person “BigMac McLee”), then I can report the problem to AOE official.
Or maybe I can send the mod to you via mail, that would be the faster way for you to play the game.
(Btw, the description of the mod is not only written in Chinese but also in English.) 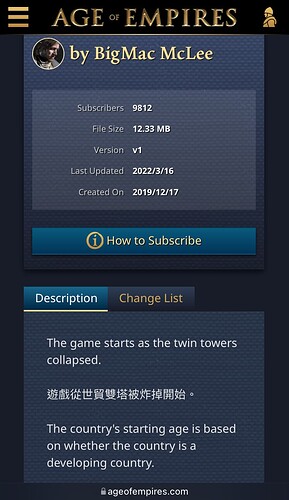 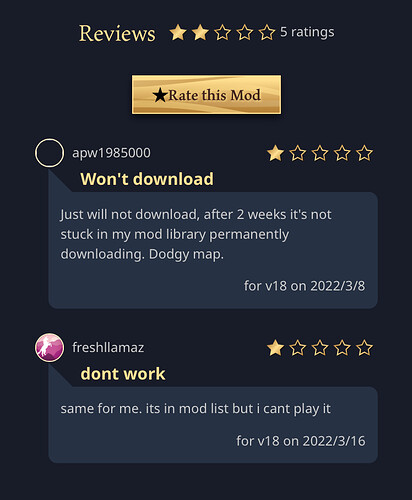 I’m actually a little surprised! Rarely see someone return to work on something after so long.

Thank you for this, I can confirm it has downloaded perfectly now - i’ve updated my rating to 5 stars

Thanks a lot!
And I hope you’ll like this game.

@DodoNotDoDo more and more players reporting downloads stuck and it won’t complete and they cannot unsubscribe it.

currently I have been asking them to delete mod-status.json but that only helps some players. it seems theres some sort of force sync either via steam or game account with individual person and the folder with numbers (C:\Users(User Name)\Games\Age of Empires 2 DE#############) is what separates and syncs online, hence always subbing to mod they previously had.

this is a poor design imo, because sometimes even by deleting mod-status.json and all mods in the subscribed folder will not solve the permanent download circle issue. also biggest problem is we cannot stop the download progress or unsubscribe them during download.

is it possible to take this away, maybe ask them to give us the ability to force stop download/remove or unsub even when it is downloading?

They’re actively working on fixing this. Hopefully it will be in the next update, but I haven’t heard for sure.