Mongols stone gather rate via the ovoo has been heavily nerfed in the early ages. However, the imporved eco upgrade costs remain the same. In order to get these upgrades, Mongols need a 100 wood ger in the radius of the ovoo. No one can reliably account for these improved upgrades in their build orders, since it’s fairly rare to naturally have a ger in the radius of the ovoo in the early game. I think it would be interesting to entirely cut out the stone cost for the improved eco upgrades, for at least the tier one upgrades. There’s precedent for this kind of boost, as pastures produce sheep faster within the influence without further investment. This means that mongol players would still need to invest an early 100 wood on a ger in order to unlock access to these eco upgrades. Stone is such a finite resource in dark and feudal age. Also, since the ovoo only lasts 12 mins instead of 15 due to the reduction of stone mine values, wood is a scarcer resource for mongols than in previous patches.

Another side point, 150 stone for 1 extra villager is NEVER worth it, I believe this cost should be reduced as well. Double producing villagers should be capped by stone cost vs the Mongol’s trickle stone income, but at it’s current price it sees zero play. Double production has the greatest effect in the early game, yet stone income has been slashed since release, without changing the price for double production. Since Mongols need to move and park their town centers at the start of every match (and sometimes villagers chopping wood prevents the tc from unpacking) Mongols start every game at least 1 villager down, sometimes 2.

Does any one have thoughts on this topic? Are these crazy ideas? I think they’re fairly reasonable. I feel like if Mongols have a way to reliably invest in early eco, then they feel less forced to tower rush etc to be competitive.

I say, Mongols already have a eco disadvantage.
Either they give back the original raid bounty of 50F and 50G. or add 25S as default bounty reward when raiding.

Or they can make the eco-upgrade not require any stones for upgrade. They just need Ovoo influence and some extra added cost.
The Imp econ upgrades would actually allow mongol econ to be on par with all other civs.
Consider all other civ has hefty econ bonuses
such as

It already has many additional bonuses in the ovvo, but instead of using them they take out units for x2, only the steppe gives you more than 50% gold 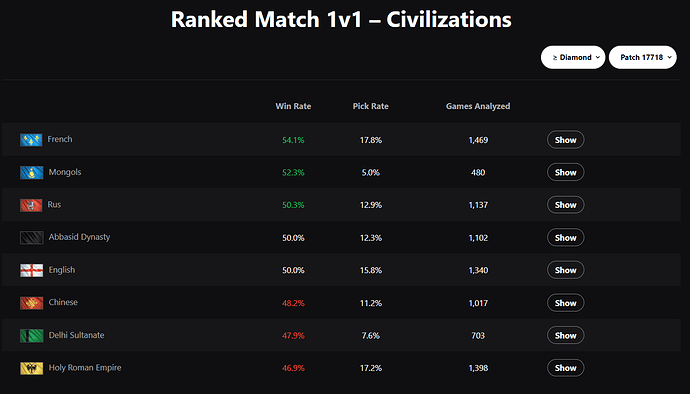 Less than 500 games played, statistics need much more volume to be applicable to the wider game. This could be like, 5-10 mongol specialists with 50+ games each 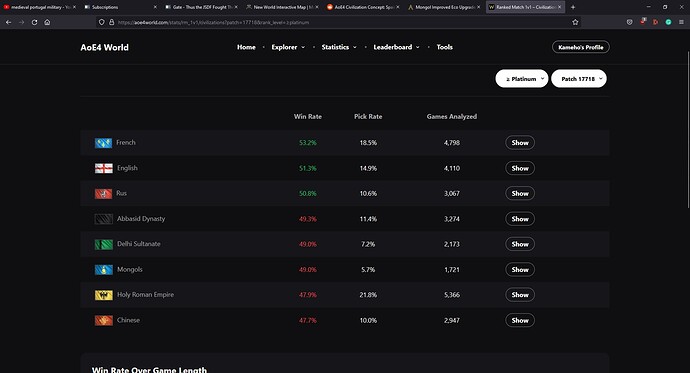 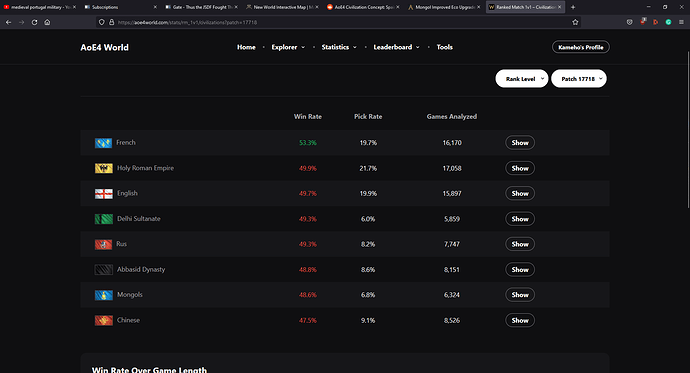 Taking out stats can be increadible subjective.
Should we only take into account what the top 10 players think?
Or should we look on the wider picture of things?

Even so, across a broader skill with a higher games played taken into account. Mongols are performing rather bad.

But another indicator that is quite often not talked about, is pick-rate / how many games are played.
Which is also a strong indicator that something isn’t right.

Mongols used to have higher than average pick rates, somewhere between 3rd~5th most played Civilization.
Now its the second least played civilization, only Dheli is played less.

This is a massive drop in play!!

And this is even taken as far back as to beginning of the game when Tower-rushing-Meta wasn’t even established! And people played Mongols, because Mongols and not necessarily because they were best civ or whatnot.

Regardless, just posting statistics and praising them as Gospel is severely flawed in many ways.

Yes Statistics helps pointing you towards a direction.
But it doesn’t tell you how the road goes or what kind of stuff you might come across on the way!

What happens on a math-board is usually quite different than what happens in practicality!

We can point at mongols being OP because Steppe Redoubt gives them 50% more gold drop off from gold mines.

BUt nobody pointing fingers at Abbasid getting extra 15% gathering rate from farms, 8% more drop off of ALL resources! This also comes into account on FARMS which is a infinite resource! And screaming that abbasid econ is completely broken.

Heck nobody is even pointing fingers at Abbasid trade econ is off the hook!
In team games. This game is more than just 1v1.
Most of my Abbasid games I accumulate gold equal to ALL PLAYERS COMBINED, with my very own feudal Tradewing-build that I manage to make.

On certain maps its fully possible to pull off, such as French Pass where it becomes absolutely broken.

If I play 3v3/4v4 and have a center start. I quite often use that opportunity to boost teammates into fast imperial, allowing them hit Imperial age around 14 min mark.
Not just 1 teammates. All teammates. (at the cost of me staying extra long feudal)

But abbasid, just like mongols have their weaknesses. And going this crazy tradebuild also has its weaknesses.

Same thing as the Steppe Redoubt can easily be denied by map control and the very fact, gold is limited.

I think the Mongols have a good economy. I can feel it when I don’t use x2 units and just build more military buildings. The Silver Tree and Steppe Redoubt as a team is very very good. Researching Improved Wheelbarrow is good. Still they don’t shine in early game. I wish the developers would give Survival Techniques for free. They are a civilization on the move. 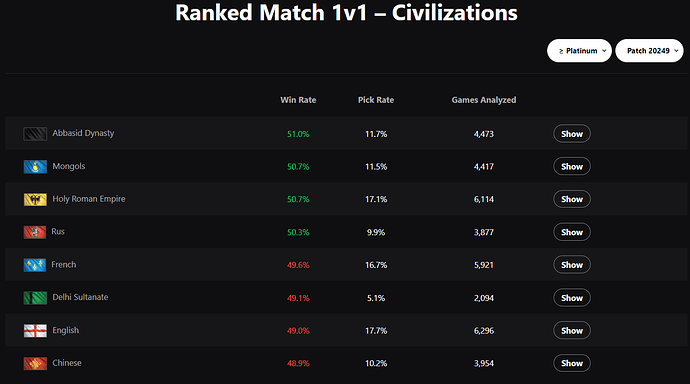 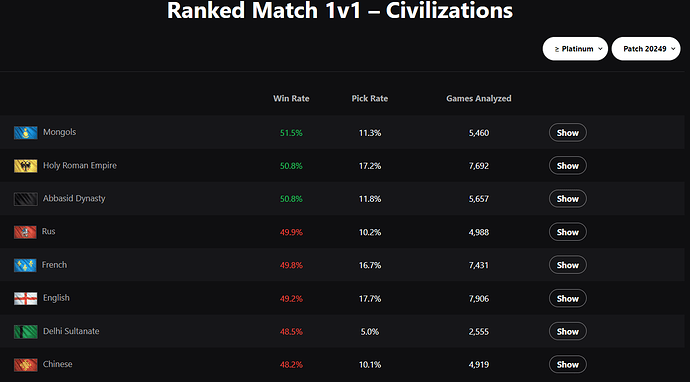 Yes, mongols are in a good place now.

But showing stats dosn’t solve the underlying problem:
Mongol Imp-Eco upgrades are not being used.
Because they are not worth it.
Then why even have them in the game? Something needs to be done in order to make these features more relevant.

Since Mongols need to move and park their town centers at the start of every match (and sometimes villagers chopping wood prevents the tc from unpacking) Mongols start every game at least 1 villager down, sometimes 2.

I’ve been saying this since release