Please can we get this fixed?

Enjoying the game a lot though! 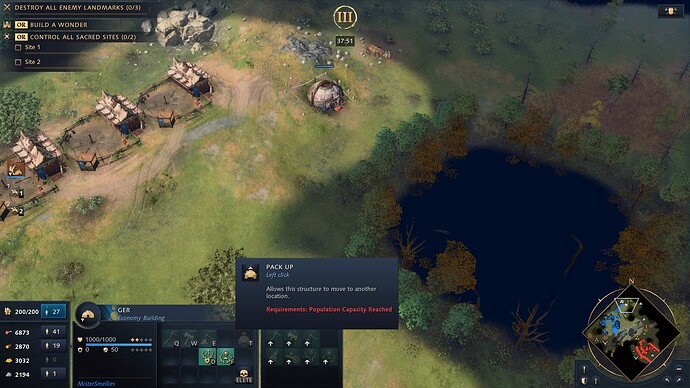 I’ve noted two thing about those building recently, both of them quite annoying and feeling a bit sluggish.

1 : moving building takes one supply slot, which most of the time is not that big of a deal, but when you’re on late game and at pop cap that becomes a real issue. I don’t really see why we couldn’t move building just because we’re at pop cap, that doesn’t make too much sense to me.

2 : buildings are counted as military units of all things. That means that when using the select all military hotkey, you will select any building in packed form. And that is really a big issue when dealing with late game once more. I’ve just played a game and found myself having my landmark TC inside my opponent’s base because i tried to move it and then selected my armies to attack. Same thing with gers , I was wondering where they went and turns out they where just randomly moving about instead of relocating properly.

Mongol packed buildings count as pop meaning I cannot pack up buildings to move them if I’m at pop limit.

Please can we get this fixed? Reposting this in bugs as it’s a bug I think and it got drowned in general discussion.

Enjoying the game a lot though! 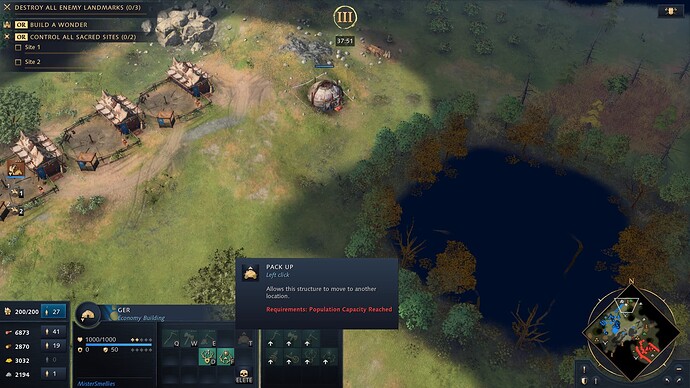 Thanks for reporting, we’ll forward to the team for review.

That’s great! I wonder if it was intended so thanks for passing on.

Mongol buildings can’t pack up into a wagon when you are at 200/200 population.

this is not a bug,

I don’t think that was their thinking. Plus the gers go down extremely fast.

Extreemly fast? Have you actually seen the damage number on it? It can soak 2 cannon balls Imagine how much damage you can deflect in a fight late game. You could pick up 6-12 of buildings and just deathpush the enemy army. If they take 5-10 seconds to deal with the extra units or cause issues in the micro you win.

moving buildings need to be removed from the “select all army” hotkey!
I always end up with a few Ger in a big lategame battle

Yeah can’t wait to face mongols bringing his 200/200 army plus all the buildings packed to the frontline making any arrow throw at it useless!

Even the update couldn’t fix it i have the same problem im in the mongol campaign.

Hello sir I have the same problem even after downloading the latest update, by the way im playing a (campaign mission)

They’ve now made it so landmarks can be moved at pop cap but not other buildings. Seems to be an intentional design choice.

While this is not very urgent, but worth to fix in the future.
A Mongol Landmark in campaign mode Not able to Pack and Unpack while at maximum population. 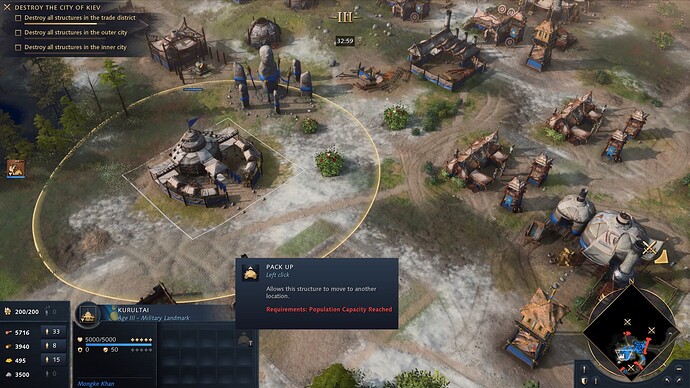 Note: in multi player, landmark able to Pack and Unpack while at maximum population (worked already Update 8324 thanks you)