The AI still attacks mindlessly and takes huge losses when attacking enemy walls. AI just walks up and tries to attack the walls without siege weapons and still constantly advancing and retreating because of this loses the entire army. At this point, even the AI with bonuses can be defeated very easily by simply putting up a stone wall and all.
The AI’s micro and macro are terrible.

The Abbasid Dynasty AI does not build the Culture Wing.

The AI is trying to get food from allied fields and thus a lot of villagers are just standing still. 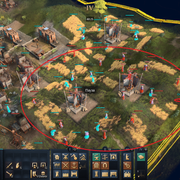 The AI is trying to get food from allied fields and thus a lot of villagers are just standing still.

Was that AI trying to get food from a player’s farm or from another AI’s farm?

I don’t remember how many games i should 've lost against this new ai against 6 of them but won because i just put a simple wall,2 keeps and a couple of mangonels.

AI can’t micro their armies. To be specific they can’t split and attack effectively . Also can’t properly flank and retreat.

AI also can’t protect it’s siege weapons if somehow manages to gather some trebuches which should fire from back instead od being on the frontlines.Battering rams suffer from the same condition of being not protected.

When in imperial age it needs to switch priority to bombards too.

I agree with you completely!