i need more banner options regarding,

banner color, sigil color, COLORS man why am i limited to these premade ugly colors srsly ???

like there’s maybe only 3 combos that look good we want MORE.

i wanna be able to remove the sigil frame for the sigil to sit on. what if i want no sigil nor frame or i just want a black or white or red flag like just the color by itself. please change this man

I agree! I would love more options, perhaps more masteries in the future, or special unlocks for raising your player level. Perhaps do a starcraft approach of achievements such as playing a certain number of games as a specific faction, or winning a certain number of 1v1, 2v2, 3v3 and so on… I also would like new statues, perhaps they could add chess pieces as a callback to the AoE2 intro.

Here is my current banner:

I sure wish they had a bunny emblem, oh well

We definitely need more color options, their premade colors are unbearable and hardly work well together.

Also I think it would be awesome if these banners showed up literally anywhere in game besides from the loading menu like it would be dope if it were flying atop your TC or if like 1 out of every 10 military units was automatically designated a bannerman… missed opportunities, hopefully they’ll add more in the future. 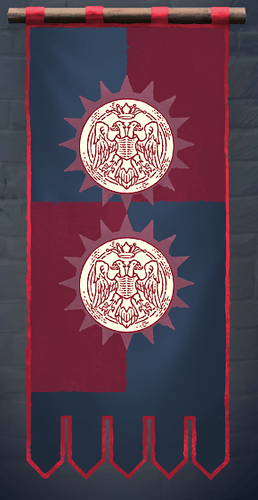 also: I’d love to be able to use the age insider “Water Sigil Frame” that thing looks sick but it won’t unlock even though I’ve signed up

And really hoping they add the banners in game some where. Would be awesome

I agree it’s annoying how the patterns don’t continue all the way down, forgot to mention that. and yeah having the banner somewhere in game would definitely be elite.

also agree on color palette being very poor. hope this gets improved!

Having same issue about "Water Sigil Frame " too, I can’t unlocked it even though I’ve signed up