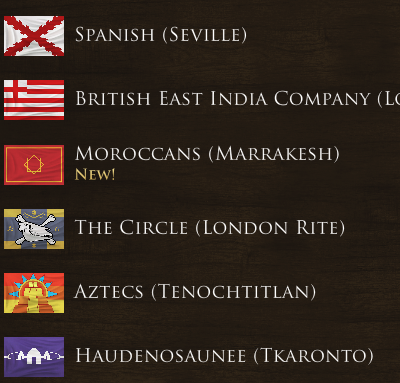 If they do add Moroccans they won’t be the same civ as the campaign one (different civ ID), so it’s not a guarantee that they will be added, just that they were going to be before.

For anyone wondering, the big find is that the mod, which make campaign civ available, have a NEW! beside Moroccans, something that the others do not have.

That could be a clue.

That’s my mod Campaign Civilizations, it’s made The Circle, British East India, Falcon Company and of course Moroccans playable. You still need the dlc African Royal to play as the Moroccans though.

most probably it will added like US… complete quests and get this civ, when is morocco’s independence day?

I’m happy with that because completes The African Royals. A third north african civ was obvious, they cut off it in the release because they had little time before the launch.
I think it will be a free update for The African Royals’ owners.

That flag already exists in the scenario editor and it’s part of the art of war. But in any case high chances of getting Morroco as the next civ because there are bunch of different stuff inside the game which is related to Berber States/Morroco.

That’s interesting. Perhaps, right after the Halloween event, there’ll be an event spanning 17 days over which players can complete challenges to unlock Morocco. The challenge might end on Morocco’s Independence Day.

No indication of a new DLC on steamdb.

i somehow doubt morocco will be a DLC, i think it will just be a free update cause the patch notes sort of made it sound that way.

If they end up giving us Morocans as an African civ, there are many Alliances they could reuse:
-Berbers
-Moroccans
-Hausa
-Portuguese
-Arabs

But yeah, the last DLCs we had were added (as code names) months before the releases.

As a free civ, the smart move would have been to release it with the African Royals, so people could try Africans civs and buy the DLC if they liked how they played.

I think that they wanted to release it with African Royals, but it didn’t make the cut because time or covid. I doubt that it will be free for all, only for people that have AR dlc.

It seems to me that the possible addition of Moroccans civ will take place in the second half of November - on the occasion of their Independence Day on November 18. Before that, there will be an update and an event focusing on the Aztecs and US civs (announced by the developers).

An update to add Moroccans could also take place during the event focusing on the Aztecs and US civs. This event could be split such that half of the challenges would be available to everyone, while the other (Moroccans) would only be available to TAR DLC owners.

If they end up giving us Morocans as an African civ, there are many Alliances they could reuse:
-Berbers
-Moroccans
-Hausa
-Portuguese
-Arabs

I hope they will have 1-2 alliances unique to their civ, for example: the Germans who were the only European empire to demand a sovereign Morocco.

I’ll be happy with whatever the devs choose. I just hope that this community doesn’t fly off the rails if it’s a civ they weren’t expecting (like when USA was released…)

It could also be the South African Republic,better known as the Transvaal Republic (1852-1902) with Marthinus Pretorius as leader…

Most likely,Morocco will arrive after the November patch with the Aztec and USA rework…