So this is an ability comes with birth, and if you don’t have it you can never be a pro rts player. I personally don’t have this ability. I always forgot something while playing, i can’t manage upgrades, economy and military at the same time and fast.

Since being a pro player does have a physical component there are going to be people who will never be able to hit pro-level APM but most people will be able to get close enough if they want to really put in the time and effort.

As for managing everything, that really comes with practice. Pro players aren’t just playing a couple games a day to reach their skill levels. They play for many hours a day with specific goals in mind for their training and they learn from each game.

It takes more than just queuing into ladder a bunch with the same civ, or memorizing the tech tree, to be a pro-level player.

Do u learn how to type 500 keys per minute with birth?
No. U learn it.

PS if u dont use hotkeys, u will never learn how to play. With hotkeys 99% of movements became automatic, and u can “think of strategy without how to do it”.
If u searching for blacksmith more than 0.5 second… u play game “how to do it OR how to find blacksmith”(not strategy game), if u click 2 buttons to do an upgrade - u have plenty of time to “multitask other stuff”.

It can definitely be learnt/improved. I played for years since I was a kid with no hotkeys and only started using them in the last 4 years or so.

Rough read. I can get by reading a text massage with “u” instead of “you” but in a paragraph it hurts.

Is there any hotkey setup use by pro gamer somewhere? because i used my personnal hotkey since 15 years and now i can’t just because of this atrocious grid systeme. Like i am suppose to make military build in group 5-9 and units inside are suppose to be set up arround it (archery is grp 6 so hotkey are arround “g”, caserne is grp 7 so hotkey are arround “h” etc…).
Right know i can’t enjoy the game, i tried to relearn with grid systeme but it’s seem impossible just because some of my ctr grp are far from “aze”

It depends on the game.

In SC2 pros use grid because it’s well implemented and keeps the hot keys consistent across races.

The grid layout on its own isn’t the issue so much as the layout of the cards doesn’t work well with it.

The benefit is also less in Age of Empires where most buildings for most civs have the same names so they use the same hotkey; contrast with SC where each races’ building for collecting gas has a different name and hotkey (if you aren’t using grid).

But how they use control grp if you need to hit “9” then “a” ? seem unplayable. It’s seem obvious to me than your grid are suppose to “follow” your control grp (qsd is good for group 1, sdf for grp 2, dfg for grp 3 etc… because it reduce the distance between each hotkey, wich is not the case with grid systeme). Or i miss something.

It’s frustrating because the game is cool but in the current stat, at the end of november (1 month of xpass) i wont be an aoe4 gamer anymore.

In SC2/AoE2 the attack key is R/T when you’re using grid, not “A”. That’s the part I meant about the command card being laid out to support the grid style bindings.

I also dislike having ‘A’ as the attack key since I also find it awkward to get to when using 1-4 for command groups.

The other advantage is when the hotkeys for similar buildings would be different (eg ‘e’ for Extractor vs ‘r’ for Refinery in SC2), putting the building in the same place on the command card means it has the same hotkey no matter what; though this is less of an issue for AoE where most folks are using ‘m’ for Mill (or whatever).

They just think and make decisions faster than you. As mentioned earlier humans cant really multitask

but even with this, it’s barely playable (after some time in the game…annoyance and annoyance )… dont have time and dont want to relearn for 100 hours for missing features.

Just wait for hotkeys fix, no other way.

If you are playing AOE2:DE by chance as well I recommend this playlist and guides: 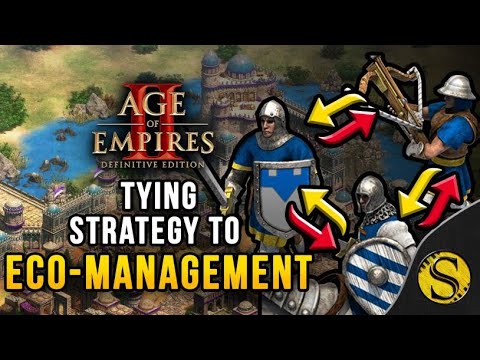 If i am not wrong you can’t use mouse button (at least i can’t use mine ^^), i realy realy want know how pro gamer play this game lol

PPS i’m not pro, I’m lazy player but on quite high lvl.

Oh okey you have your 9 numbers in your mouse, sound cool but if i am doing that i need to change a lot of habits

I think to improve you must first play worse.

Let me explain. When you first play AoE4 or another game. You go in flailing your arms like a child. And with some practice you get pretty ok at it. But it’s not the correct way to play.

Imagine fighting games like MK11. You’ll do WAY better by just buttonmashing than actually trying to do something correctly. And since you know you can do better by just mashing, you continue doing it. But after a while the player who sucked at first, but learnt how to do things correctly, beats the crap out of you.

My point is - don’t be afraid to play “worse” than you could at first, as long as you’re focusing on doing good builds, scouting, putting up camera hotkeys, ctrl-groups etc.

Viper and Mlord are progamer for exemple.

“pro player” purely means they generate an income stream for playing games or a particular game // In conjuction with being paid to play a game for any given reason, they are typically as a result, very good at those games, because of the time spent in the genre.

Viper and Mlord are progamer for exemple.

These guys are very good players and get paid for their time playing those games. Another example is Aussie Drongo – I don’t think he is very good compared to someone like Viper-- but nevertheless, he is paid for providing content in the AoE Franchise and his knowledge in those games. – Meaning they are Professional players/ Professional Gamers.