My comments on the "Rodelero" unit

Rodelero is a statistically incredible unit in the game, it has 6 speed points and a 40% melee shield,
Spain has military shipments of rodeleros a lot of improvements by the deck, the improvement in age 4 is 40% and it can also be created in age 2, however it does not seem to be a preferred option in its ranks by the players from Spain

The operation of this unit in real life is to intrude by infiltrating enemy formations of heavy infantry (Pikemen and Halberdiers) Since they were specialized in 1v1 combat, knowing that they would make the most of their agility to dodge and counter attack while occupying the angles, so if we talk about historical precision, they should serve as a more melee anti infantry unit, I do not mean that I do not like the idea that it works as a swordsman pikeman 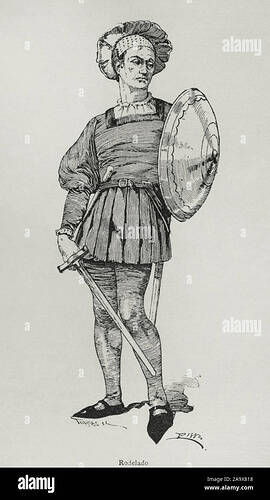 In my point of view the rodeleros are an incredible unit but it cannot be well suited against the civilizations that create en masse (Musketeers, skirmishers and dragons) which are many,
Although the rodelero has many improvements in the deck, these do not make much difference because the rodelero does not have much life or damage, so the percentage improvements help little.

I would like to know what the Spanish players think about the “rodelero”. In my opinion a little elaboration could be made, either in the improvements of him or in the unit. I had planned to increase the cost of the unit so that it is justified to improve the statistics, so that it can scale better in late game with the deck improvements

Rodeleros are an interesting unit currently and I really like them in the spanish composition.

One problem immediately is that they can’t really be an anti-infantry unit, lancers already fill that role. they do soft counter pikes quite well, for what its worth.

Rods have enough speed to almost catch most ranged cav so they can chase off goons. they compliment skirmishers really well if you have good micro. The hp, attack and combat cards are all pretty good. the units are so cheap that little buff increases their cost effectiveness.

they’re useful vs nearly any stable unit and lancers counter nearly any barracks units. good combo, if not a bit historically inaccurate

iirc they used to be(like way back) more of a generalist unit designed to beat other melee infantry due to high armour and relatively higher damage.

and muskets in melee.

So yeah I think they follow their historical role well as a sort of disrupter.

Yes, they were nerfed several times in a row. They were basically auto win the moment they were deployed

I would think the same if heavy infantry battles were very common, but it is not, the most used is the musketeer and the musketeer possibly before the rodelero approaches he would have already fired the first shot, in fact here is one demonstration of how he would do it against the musketeers 💥 10 Mosqueteros VS 10 Rodeleros [AOE3] Edad Comercio - YouTube

My concern is that, which cannot be exposed in the front because they only have 135 life, for which a shot would significantly lower their life, considering that the rodeleros in late are not strong.

But if I imagine that the old version of the rodelero would be strong in the current meta, especially in age 2, 30 second demo as it would against the musketeers.

i mean rods in the current meta are meant to be disruptors in a sense, their role is not to kill the enemy units but to force opposing units into melee combat so that skrims and musks in the back can fire without challenge.

they do that very well with their 6 speed and 40 melee resist. you do need a mass of them to engage the enemy and you do need to force them forward and not just like click them to attack enemy units since then they will just break formation and get sniped off.

Or rods with bonus vs light inf, but not vs cav.

It hurts me that they steal the anticav paper from the Tercios pikemen (practically unused Spanish main unit).

I would have liked to use a historical combo of pikemen (vs cav), rods (vs light inf “well, historical is vs heavy inf…”) and arquebuisers (vs heavy inf).

Their role right now is as an anticav and to catch and surround skirms. They are useful, but I would like an improvement with a price increase so that they are more durable.

In times when Spain win at all with rods-dogs rush

In the latest patch of Wars of Liberty mod(as of my recent findings in YT), macheteros for Latin American Civs had been revamped to quick-moving swordsmen with attack bonus against infantries instead of against heavy cavalries like this:

One problem with Rodeleros is inconsistency.
They look like Shock Infantry but they are Heavy Infantry. This will confuse a lot of new players especially because they are trainable in the first campaign.
They were designed before the game had the concept of Shock Infantry. If Spain was added today they would clearly be designed as Shock Infantry.
But I think changing them to Shock Infantry (and potentially remove Hussar) would be a bit too big of a change now.

They cant be SI cause they were made to counter pikes, not the reverse way.

A lot of counters in the game are not realistic.
Consistency is more important then realism in my opinion.
Other Shock Infantry would probably also be a good Pike counter in real life.

To be honest I miss Rondartschier(Austrian/ German version) that was a popular merc in Europe. 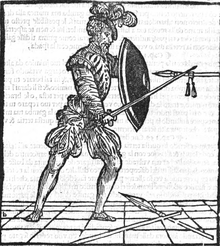 who knows cossacks(game) knows them.

I’d say most infantry with small shields and short weapons in reality were meant for skirmishing and disrupting the pike formation.
But Aztecs/Incas had need a cavalry-like unit, that’s why shock infantry existed and some melee units that were not vastly different roles were forced into that role.

Spain does not lack melee cavalry so they do not need a shock infantry.
More realistic options (though I doubt they are really going to rework this unit) would be a melee skirmisher like urumi, or a infantry-countering HI like JPK.

I heard that swordsman was originally designed to be a separate unit line but was then removed. Rodelero is kinda among the “leftover” of that design. Same with other sword units that counter cavalry (which made little sense).

There are quite a few other examples of this, like why the hussar later got the “heavy cavalry” tag in TWC though it is clearly designed as a “light cavalry” from both its look and its tooltips (because there was a “true” heavy cavalry class in early designs, the shared unit was a short-ranged infantry counter and cuirassier/lancer/oprichnik were the unique ones).

And when they revived some of the cut designs like the HI-countering melee infantry (JPK and urumi), the “ranged heavy cavalry” (hakkapelit and harquebusier), that brings about more inconsistencies.
I guess black rider was originally that “ranged heavy cavalry” merc from its look as an early cuirassier. So if that design was kept, the role should have been swapped for black rider (short-ranged heavy shock cavalry in reality) and harquebusier (long-ranged light support cavalry in reality).

I would still love to see how a 1.25x heavy infantry multiplier would work on them, it would help them apply more pressure to musks while not being too overwhelming, especially in commerce age. Other than that I think the unit is just too expensive for what you get, it’s only cost effective role seems to be chasing off cavalry so it would help to give them slightly more utility.

No, they would be totally broken.

How so? Their base damage is so low that a 1.25 multiplier isn’t going to put them insanely over the edge, just trade slightly better with musks. With a base attack of 11 they’re only going to be hitting heavy inf for 13.75 damage which is still significantly lower than even a rajput at 18 base damage. Personally I just think for 65f and 35c which is same res as musk, they deserve to be able to apply slightly more pressure in other areas.

In age 2 though I think there is the risk that you create a deadly comp there since it would mean that you can go Rod+ hussar and have a comp that would counter both xbow pike and also muskets.

Spain also have things like unction which also scale up their attack tremendously. at max its like 50% atk boost i think so combined with the multi that is deadly.

its also important to note that melee units attack at 1.5 speed so even with 11 attack they are dealing 22 dmg in the same time that range unit to fire one volley, it can get out of hand real quick