My thoughts on AoM Definitive Edition

Hello, first I want to tell a little background of my acquaintance with AoM.
Personally, I never liked the first parts of AoE because of the monotony of factions and the general sameness of nations, this was partially corrected by AoE 3, which was my favorite part of the series (before the release of AoE 4), but it so happened that AoM passed me by and I played it for the first time just a year ago and I really liked it. This game is literally like Warhammer FB for the Total War series, adding magic, monsters, spells was a very cool decision. I would really like to see AoM DE with new factions of Persians, Romans, Slavs and so on, but there is one problem.
The fact is that I understand why the re-releases of AoE 1,2 and 3 were needed at all, they were a kind of PR action designed to show the revival of the franchise before the release of its new flagship in the face of AoE 4, and since AoM is a “hut on the edge”, he was bypassed by this PR action, and my dream (and the dream of thousands of players) is shattered into a sad reality, it seems to me that AoM just stays out of the AoE ship, simply because it is not “Empires”.
I would like to believe that someday we will see AoM DE, and it would be very cool, but I don’t believe that this will ever happen at all, but I would be glad to be wrong.
Maybe Microsoft will give us some kind of sign. 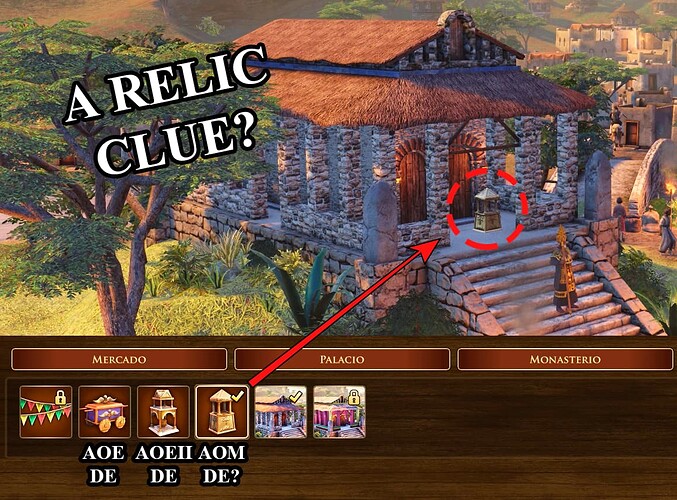 I want to believe it is

Where found this? AOE 3 have relics?

If anything, it’s called an ‘ester egg’.

Where found this? AOE 3 have relics?

It’s a cosmetic customization option for that one civ. There is no relic mechanics in AoE3, OG or DE.

What civ is that?

Ethiopians (an AoE III DE DLC civ) and that’s a customization object for their Home City.

I don’t have any proof but I am almost 100% certain that we will get AoM DE this year, will have to wait and see

If anything, it’s called an ‘ester egg’.

I know. But I think that could be a clue considering they added the AoM relic as well instead of just skipping it.

Recently there was a post about a tease from Microsoft?

r/GamingLeaksAndRumours - Jez Corden and Jeff Grubb could be teasing the...