Ramming tactics were not often used in the timeline of aoe3, except for a brief period of time when ironclads and wooden ships coexist.

Ship boarding could be interesting, but how do you handle the ship build limits?

Ramming wasn’t common at the time, but it was plausible for Galleys and makes more sense than a Broadside charged attack since their artillery was concentrated on the front and they were vulnerable from the sides. The description below makes it sound like colliding head to head and then boarding was the primary fighting style but colliding/ramming into the side or rear of another vessel would be very advantageous.

The weak points of a galley remained the sides and especially the rear, the command center. Unless one side managed to outmaneuver the other, battle would be met with ships crashing into each other head on. Once fighting began with ships locking on to one another bow to bow, the fighting would be fought over the front line ships. Unless a galley was completely overrun by an enemy boarding party, fresh troops could be fed into the fight from reserve vessels in the rear 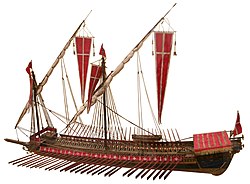 A galley is a type of ship that is propelled mainly by oars. The galley is characterized by its long, slender hull, shallow draft, and low freeboard (clearance between sea and railing). Virtually all types of galleys had sails that could be used in favorable winds, but human effort was always the primary method of propulsion. This allowed galleys to navigate independently of winds and currents. The galley originated among the seafaring civilizations around the Mediterranean Sea in the late sec...

Maybe just a charged ability that’s a speed boost from the oars similar to the Full Steam ability that Steamers have would be better. Better melee fighting ability could synergize with that.

I think it would be reasonable to allow exceeding build limits by capturing ships. You can already exceed livestock and Chinese Disciple build limits in similar ways.

I think the fishing boats look fine as is so I’m kinda indifferent from a visual standpoint. That being said, it would be a good way to convey visual information that fishing boats take up population space.

A way to upgrade fishing boats into other ships could be a way to recycle them.

The Galleon’s ability is troop training, so I don’t think it needs the Broadside ability

There aren’t many generic artillery upgrades so I don’t see this making much of a difference.

I think garrisoning in docks is enough. Garrisoning is ships seems somewhat of a stretch.

I also think that ships should be able to anchor (hold position). Many times they are drawn into danger because the enemy provokes them.

There aren’t many generic artillery upgrades so I don’t see this making much of a difference.

Only some improvements, like those of the armory or the cards.

A hold position stance is a good idea, they do like to follow enemy ships way too far.

There are a few cases where consolidated upgrades might make sense:

There could be new cards and technologies in this regard. It would be interesting. For example the Jesuit ‘smokeless powder’ technology could affect warships as well.

The Aztecs could also extend the range of their canoes when they have arrow knights garrisoned on the ships. Giving them a bonus against buildings.

Do the Native American Civilisations Need their Own Bombardment type Vessel?
howlingwolfpaw February 1, 2022, 6:13am #10

I once wrote a lot on this type of mechanic hoping Boarding would be put into place for AOE4. Ramming works better there, but for a few select ships it could be appropriate.

Here is how I saw it working…

The boarding power bars may be different for each ship, for instance a frigate, would have a healthy strong boarding power, lets say 100 points, but would give those points out very slowly. while a Galleon might have 50 points but give them out 2x as fast. Canoes might only have 20 points, but as soon as they hit the ship they want to take over the points deploy instantly (one thing to consider is the premise of natives taking over a galleon and being able to control it, we can just imagine they hold knives to the remaining crew who are cowards and do as they say)

Canoes could be “boarded” attacked by larger ships but end up becoming scuttled instead of captured. So using large ships to board canoes would not be as advantageous, once a Canoe hit on a large ship and used its boarding party points would have 1 point remaining to still operate as a ship until shot down, or the large ship capture it and immediately scuttle it.

captures would work a lot like casting a fishing net. The animations is really already there, but a grappling hook instead of net might look better.

Ramming does not really fit as well, and I think should be skipped for AOE3 timeline. The galleons were built quite strong (made of hardwoods not soft woods like Roman triremes that needed to be dry docked so they would not rot. Those ships were actually so light and buoyant, they were very slow to sink) and harder to ram, and also without oars to get to proper speeds and directions without need of wind just makes it more of a specialty thing unless its a specific ship meant to do that.

My preferred approach is to link the capture chance to health instead of another power bar. Any ship with above 50% health is going to have a healthy enough crew to be fully immune to capture from boarding. However, with a weakened crew, they would then become vulnerable to having the ship boarded and taken by another ship attacking in melee combat. With only being able to capture weakened ships, it would make power swings from captures less dramatic and frustrating.

Ships could be differentiated into more roles with some excelling at melee combat and captures, having a high resistance to capture but only capable of ranged attacks.

In trying to capture ships part of the point is to not spoil the prize.

Here is the problem I see with using HP.

If you have 2 cavels vs 1 frigate and you want to board the frigate to take it over. In my view, the 2 caravels, could rush the frigate and try to take it over, it would be an almost equal trade of man power to do this. They are also going to be taking fire from the frigate or supporting units while doing this. Likely in taking over the ship they get so badly wounded from support fire that the trade off is sinking 2 caravels and gaining a frigate, that would have very little man power so could easily be retaken with a smaller boarding party, or quicker with multiple ships.

If they have to get the frigate to low health first, then 1 of the caravels is going to perish, and the other caravel, is going to take hits to get to it, and also put itself in danger (if it wasn’t already low on HP before) by getting up close and boarding it, taking hits from enemy fire from surrounding ships. Basically it trades 2 caravels for 1 badly wounded frigate, that could still easily be taken over again since it too would be at low health.

So it just seems there would be less incentive to try to take over ships and would be much harder to do. You would have to sacrifice lower HP units in the chance to take the ship over when you could just be maxing out its potential in ranged fire. instead of drawing close to enemy lines, or having a good player micro the half damaged ships away and drawn into a trap of ranged fire.

If they are all at full health, then retreating a ship would not work, as the whole armada would have to retreat because it would not matter that a low health ship could be microed away the caravels would just target the closest ship that was not microed away.

By having it linked to a boarding power, then certain ships can have special abilities, as to the rate of which they can use that power, so if a ship has 100 points like a frigate, it might only be able to draw off another ship, 5 per sec. a caravel, might have 50 points, but draw from other ships, 10 per sec. where as the Canoes, use all their 20 boarding power, but then drop 50% health, or sink all together. Then special upgrades could make canoes leave more boarding power on the ships they take over.

So some problems I do not see addressed, is what if both ships are 50% damaged? are they just not able to board? does a boarding ship need to be above 50% and the boarded ship need to be below? this would make it really complex and risky. In my view, with a power level, after the board was complete there would have to be a surplus of manpower split between ships, or it would be a failed board and the ships would just fire at each other. (essentially 2 types of crew, there is the operational crew, and the soldier crew) So if even 2 caravels were boarding a frigate, and 1 caravel sinks before it can fully give its boarding power, then the frigate actually would win vs the other caravel, and lose the boarding war, split its boarding power between the 2 ships. This would create some interesting dynamic and risk/ reward scenarios.

It also seems harder to give ships specific boarding roles if there is no mechanic behind the system other than HP, I think more explanation is needed as to how this would work.

Some possible Upgrades of this system, could be boarding resist, extra boarding power, speed at which boarding power can be drained, extra minimum boarding left on captured ships (to prevent reboarding) Ship speed boost to aide capture. Boarding power regenerate while stationary (vs healing at a dock)

Galleons should be able to create troops without going to shore. That is to say, the units that he creates, accumulate inside.

I hadn’t thought about that, but it would be a nice buff to the unit. They are seldom used since they are not efficiently good at attack, and having to be on the shore puts an expensive unit at risk, and gives away the strategy.

Perhaps they would train slower at sea, and normal speed on the shore to not put anything too out of balance.

A wee bit of progress on this front. Ramming is a thing now

It has been fulfilled to add crew for the fishing boats of American and European civilizations.

A wee bit of progress on this front. Ramming is a thing now

A bit odd though…

Ramming was more a thing for galleys, so it’s weird for 2 reasons:

Still it’s nice that they added the galeasses and that they are experimenting with new abilities on water too.

Yes, if anything it should be for Galleys.

Galeasses can ram too, it’s just weird that galley can’t.

well thats awesome! I havent seen it in animation yet though

Landing troops is also very tedious. In case it is not possible to disembark all the troops in a certain space, at least the ones that fit in said space should disembark.

I expect a naval reworking like it happens in AOE-4. At least a bit more viability and less clumsy ship handling.