DESCRIBE THE ISSUE IN DETAIL (below). LIMIT TO ONE BUG PER THREAD.
The Nebraska task of US challenges can’t be completed.
After I won a skirmish game with having upgraded a trade route to iron horse, the task couldn’t be completed as expected.
I repeated many times according to the game’s presupposition and literal request, and couldn’t complete the task.

1.just try to complete the Nebraska task according to the preset and literal requirements of the game. 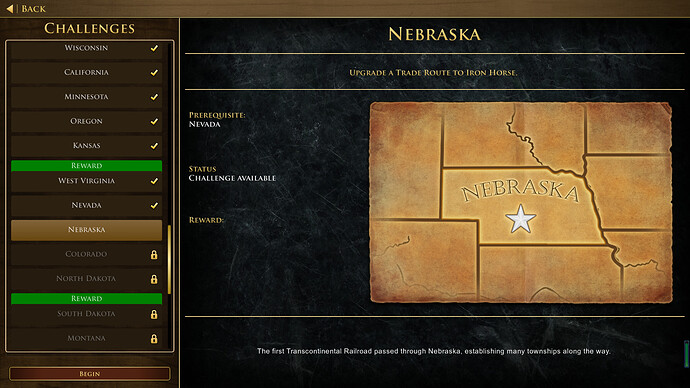 Use the map of Texas and not the one the game gives you.

The problem seems to be South America maps. The Iron Horse upgrade is called Iron Llama, and causes the challenge to fail. Play on any Asian or North American map and it’ll work. I attempted the challenge far too many times than I like to admit before figuring out the issue.

Thank you, Texas was a good choice. Pampas was the provided map and that didn’t work lol