I have played today the 4th French (opponent) vs HRE me Quick match, with 4 losses…

HRE can age up quite quickly, typically some seconds earlier than French in my experience. However, you know french will come with knights soon, unless you deny their gold. But HRE is not really good with that, or do you know how without delaying a lot of other stuff?

In most matches, opponent coming with a couple of knights so I have to somehow prep to counter… While I am spending my resources on barack and spears/maa, and they try the usual runbies, they go 2 TC. At this moment, they already have eco lead, and vil lead. But I cannot push out because of the knight threat and general goal of going towards age III.

Typically I reach castle age, where I can grab 2-4 relics. I think I am happy, but that’s the moment when opponent is also castle and they come with knights and trebs… Game drags on 10-15 minutes more because HRE is good with trutling… but they always have eco lead, free stone, stronger knights, and unbeatable crossbow unit… At my age 4, it’s too late to catchup, since they have plenty of units.

Are there any general tipps / strats, that might work better, than going age 3?

Start harassing their gold from 2 minutes, with 2 or 3 scouts.send a villager forward for a tower, mine 50 stone for arrowslits. Send spearman in the darkage already.
As soon they age up, produce archers to protect your spearman. Make walls in your base.

(Not the best game because i missed that he was in my base
with a knight, killing 10 vills. But it blo ody worked.

Thanks for reply, will do in the evening… This sounds like i need to chop trees early and delay age ups, but worth a try

After all going into late-game where enemy has 30 vill lead and map control, is not a viable strat apparently

I delayed my age up as well, but i delayed France with 3 minutes. And as long they can’t produce their Knights, it’s a huge win for yourself.

Against French I find that going for a second TC as fast as possible is the best choice.

Gather enough gold to get a second prelate and veteran spears and then switch all vills to wood and stone, save from 4 that stay of food for constant vill production.

Then depending on the map, add outpost and wall, especially the latter, since it takes away the mobility of knights.

Then it really depends on what landmarks you choose and the situation, either boom into farms of FC into relics/burgrave, but in general that how I approach French players.

Oh and start by adding a second scout, then a prelate, and then vills, you will need as many sheep as possible.

But anyway, French are an hard counter to the HRE in general, so you will play a costant uphill battle.

One way you can play this is to fast castle into knights and raid the hell out of him. French on 2 tc wont be able to reach castle age for some time and require a lot of food to keep vill production
Maybe even go pro scouts so you able to sustain knight production, get the +1 ranged armor upgrade and your knights can pretty much sit under tc fire for a very long time.

Wood walls are cheap, fast to build, and can stop their knights to pass for a while.

Also, you can build wood walls in some way they can’t access your villagers fast. For example, in you wood villagers, make a 3-4 sections of wood wall so he can’t directly engage.

He will not lose time destroying that type of walls, and your vils will be safer.

My problem with fast castle is, that French punish that immediately, while they have couple of knights, bunch of archers, and until I can get couple of units, they have 2 rams, and knights killing vills. If I make feudal production, that delays me already - but I don’t know how to make naked fast castle against French.

Yes, wooden walls help a little. I see in pro games that walls scare knights away… On my level, people just start torching the wall at 3 places, so I cannot just keep repairing. Plus when I go with my vill to fix, somehow knight is able to kill the vill through the wall…
I don’t say, walls are not good, seems to give me a couple of seconds - I just probably need to learn how to use this time efficiently.

You can’t do a naked fast castle if you are under attack, you will be spending resources on economy whereas your enemy will spend resources on military.

You need to produce an army to defend. Don’t forget defend is easier than attack, you have your vils near to build towers, your barracks, etc…

Against knights+archers you should build horsemen and pikes, you can mix with archers also because he will add pikes to the archers. Pikes are cheaper than knights, so you can do 2 barracks and outproduce the knights.

At this point it’'s pure micro, defend and kill the knights or archers trying to lose less units than your rival, while producing more villagers. Put them in food, wood and gold, in that order of priority.

Usually when I am under attack I put 75% in food, 20% wood and 5% on gold, aproximately. Example, if you got 30 vils, put 18 on food, 10 on wood and 2 on gold, because you need constant unit production, and you need only food and wood to pikes, horsemen and maybe archers.

About the walls… Don’t lose time reparing them, they are there just to give you time, but as you said, you need to know how to spend this time.

French has a staggering 65% winrate on ranked games (gold division and up) verus HRE. No match up is worse (or better, depending on which side you are). In fact I’ve tried to find games of French players losing vs HRE on the clip finder from AoE4World, not with much success. 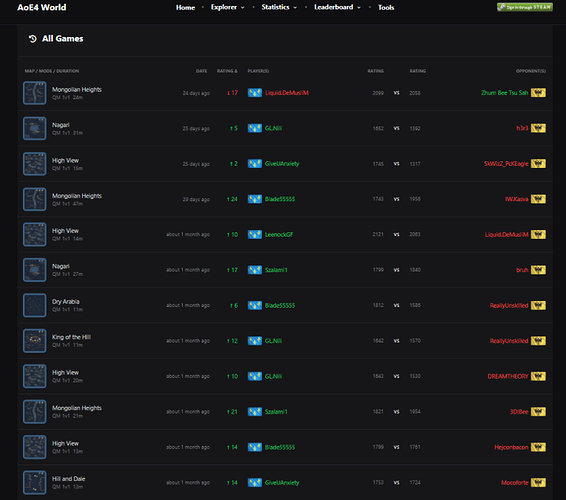 Nobody can give you advice on this; people can give advice on how to play better; on how to lose less hard; but not on how to win. Anyone who claims he can misses the point that his theory is not applicable in game. I’m also a bit troubled by the advice you have received above; because all ideas sound nice; they are over simplistic and so straight forward that any (semi) pro player would have grasped it, used it well and it would have expanded to be meta. Which we all know is not the case; or we would have seen that applicability in game.

In summary: this matchup is simply broken. Your best chances of improving is ensure devs see this and address it in a balance patch. Which they may well do, directly or indirectly, because the 2nd worst matchup in the game is HRE vs Mongol where Mongols win 60% of the time. Since in both cases HRE winrate goes up to or somewhat above 50% as the game progresses after 30 - 40 minutes it simply signifies how beyond terrible HRE is vs early game pressure, most notably cavalry.

Or you can switch faction on maps where HRE is not good, or you are likely to face French. For now, that seems to be the only solution. But in all honesty it is a work around and it should be looked at by the devs in charge of balancing the game.

Thank you for the detailed reply. Interesting to read.

As someone also mentioned, I was feeling this “uphill” battle with them, but at first of course I thought I just did not figure them out. (Ok, certainly a part of it…

pros could eventually win games with them with their skills)

I think for now, I go back to other civs, Abbasids and Rus seem to better fit my play-style. HRE looks cool but somehow I cannot make them work as good as others.

They can punish that if they play standard with one TC.
French on 2tc has a much harder time punishing a fast castle, if you scout them on stone then its very likely to be safe to go fc becaude they struggle a lot with food early on and they won’t be reaching castle themselves anytime soon

In this case, attacking is better than defending. Try to preempt Spearman to their home’s gold mine attack and you’ll find that France has to spend extra time and resources building archery ranges and archers to defend your Spearman, which will give your home a respite.

Once in the Castle Age, stop building Spearman (depending on the condition), replace with Crossbowman to defend against enemy knights, and produce your own knights for attacking main force.