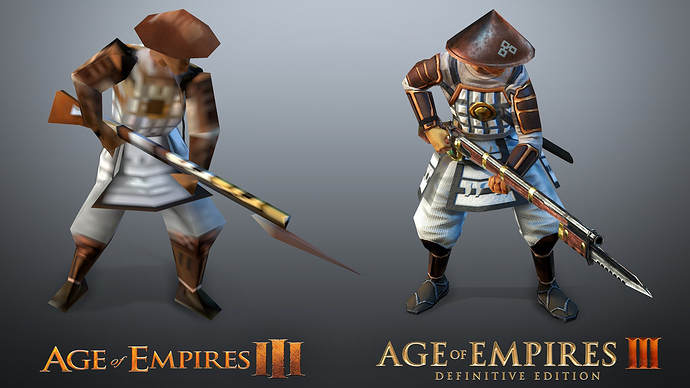 True, the bayonet is highly anachronistic.

Yeah, that seem a bit odd and anachronistic…

You should point this out on Twitter. I am sure they will respond.

There weren’t even bayonets in Sengoku Japan, and when bayonets were introduced the concept of ashigaru as an infantry unit no longer existed.
But I’m okay with the design if I think of them as also representing standard Japanese infantry after the Meiji Restoration.

They could still give it a more era-sensitive bayonet, instead of the weird post-WW2 one they seem to be getting with DE.

Ashigaru have Bayonets because they reuse the Musketeer animations a lot, and Muskets do have a bayonet Melee attack in AoE3.

Well, it’s not like that it completely ruin the game, but it is awkward…

Still, I don’t think that I’ll zoom in that many times that I’ll be bothered to see an anachronistic bayonet…

I am quite bothered, to be honest, and wish they fix it before release.

It does, but then again it’s not a reason to not buying the game.

However I think that now that we make then notice it they will fix it sooner or later.

Ashigaru musketeer should have a sword-type bayonet or a spike bayonet.

or did we forget the english longbowmen and gatling guns in the same game? aoe3 isnt as bad as 2, but sure as heck has tons of inaccuracies, its always funny when “internet historians” get upset about the inaccuracies they happen to notice while conveniantly forgetting the others…

and on top of that they had serrated bayonets as early as 1880.(probably earlier even) so not only are you being irrational complaining about a serrated bayonet(when there are worse inaccuracies), you are naive enough to think it has to be something from 1940 onwards, and unsurprisingly it has to be murican… since no other country exists…

I agree a sword bayonet would make a lot more sense and would look better visually.

I would settle for a simple spike bayonet, but the sword option does sound cool.