Hello everyone…
The new update has risen and brought us a new Arabia map Wuhuuuu
Before going to the critics i have i would like to state some good things first:

BUT since arabia is the most played map in a STRATEGY game i really cant believe what im witnessing here right now:

What stays:
MAA Archers
MAA Scouts
Scouts
and every game will be FULL FEUDAL play
==>> the number of strategies in a STRATEGY game has heavily decreased … DISASTER in my opinion…

Besides the strategies that can be used, what about civilisations that are working well in late game and are bad in feudal age? => the gap between those civs and strong feudal civs are increasing more and more … cant be the goal of the game right?

Last point are the hills which are generating closer to tc, i get berries and gold camps on a hill and cant even clickwall around it cause those hills are stupid … like come on this is not playable

All strategic analyses aside, I completely agree that changes this big warrant making it a separate map. Arabia was popular as it was, and I’m sure it will remain to be so, but there’s no reason we can’t have both. Both appeal to a different play style and audience. Alternating them in the map pool could offer some welcome variety, too.

i just generated a few maps of this new map for 3v3, and these games are just going to be miserable. one team will have voicechat, and the other won’t. game over in 15 minutes

new maps should be additions, not replacements

i’m not against new stuff. but it shouldn’t replace the game. it should be optional

same, i keep it banned in ranked queue too now

They’re catering too much to the try hards on arabia who rush 4 scout cavalary into your base in box formation cause they saw someone on youtube do it. A significant amount of people play this game who want to relax and have fun, making the arabia even more unwallable is going to drive them away. But at least those guys can stringently follow their build orders and get their horsies running around your base.

I agree. There are already many maps that people tend to call ‘Arabia clones’ that often get voted into the map pool, but that actually significantly differ from Arabia in terms of, among other things, openness. I wouldn’t even be mad if we got two permanent Arabia-like maps, one of which is more open/closed than the other.

While i can agree for fc being completly dead in this new arabia, i don’t for saying the old arabia was “strategic” and the current one not, the old one was almost only maa archer, fc were possible but don’t find it really viable , as for scout clearly not the best option against a lot of maa and pallisades wall, and the very first arabia was every time drush fc so no i don’t think there is any arabia for now which value both fc and both full feudal play.
We just come back to the one i remembered on voobly but whith no oases and very less random (arabia voobly was very unfair even if it tends to have very open map, sometimes, you could get only 1 woodline with some tree and a great oases at 1 screen of distance from your tc, and having both your secondary gold trapped in a cliff while the other player can just drush fc and full wall very easily).

So yeah good arabia right now for me but that is probably because i like open map, so i can understand your argument but that is not a “non strategical map” right now.

I just think new arabia will be very unbalanced. Couldn’t they just add another “more open” map type?
Because with these settings there are only a few civs which can really shine there, balancewise a disaster in my eyes.
Arabia becoming “early eco or die” now?

And btw it won’t lead to less walls, it’s just that only civs with good early eco can actually afford them.

There are players who hate walling. (or Wallers they call them) They don’t want to see games even go castle age. They want it to end it in the Feudal Age. No booming, just scout rush and end game.

I say, let them have their open maps for that sort of thing.

Yes let them have their map, but please don’t make arabia “their” map.

I think feudal could be emphatised a bit more in the game, but please in a sophisticated manner not by just making arabia unwallable for half of the civs.

I liked arabia because there were always different playstyles crashing and all of them had a fair chance. If arabia is pushed more and more into that “raiding ftw, cause defences are dead!” I maybe will stop playing it at some point aswell. Just raid ftw is BORING.

guys, the changes just dropped, i think you are possibly overreacting just a bit…

if anything it makes drushing more viable, because it is so hard to wall early. you can still wall though, how many matches have you played with the new map?

you mean the forward stone and gold has no impact?? towers dont have to ONLY deny wood…

Wall and Boom=> not possible anymore

sigh… this was never supposed to be an option in a competitive game, no other rts supports this kind of behaviour at even moderate elo…

The map is more one dimensional than before

have you even played the map? the amount of hills, also makes a lot more tactical impact, instead of 1 or maybe 2 hills between you and your ally, you now have a lot more impact choosing to fight around terrain

and every game will be FULL FEUDAL play

(1300 elo 1v1) only 1 out of 8 of my games ended in feudal since the patch, and that was because i made a mistake with my walls. if im ending games that late, it means the majority of the 80% of players on lower elo, are definitely also ending their games as late or later

these exaggerations actually detract from your argument

if anything it makes drushing more viable, because it is so hard to wall early. you can still wall though, how many matches have you played with the new map?

his point was drushing into fast castle isn’t possible anymore. drush? yes. fast castle? gone. that said a lot of these posts are very hyperbolic and people need to ease off the gas.

1300 is obviously different than high ELO , on13xx fast Imp on arabia might Work as well

And i didnt say any strategy should be supported like fast Castle, i Just Said the Number of strategies decreased in my opinion

all Games i Played and Watched (2.1k+) were kinda the same

I Just dont understand why people were unhappy with the old Map, Out of my about 700 Games on 2k+ ELO i couldnt even tell which strategy worked best cause all were equally balanced

every game was devolving into maa into archers opener and you honestly are going to sit here and say they were all equally balanced? 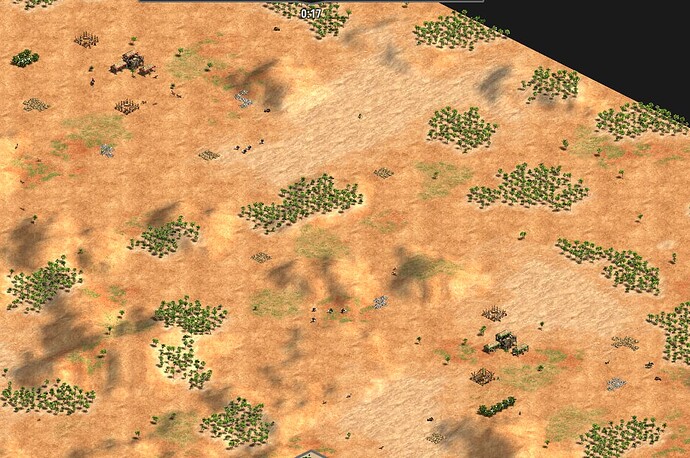 yikes… that map looks disgusting, I’d take my chances with voobly arabia over maps like this 11

every game was devolving into maa into archers opener and you honestly are going to sit here and say they were all equally balanced?

Fiddling with Arabia map gen isn’t a good way to try and fix balance (because even if it’s the most popular map, it’s still just one map). They just nerfed every other good early feudal strategies because of people complaining on forums. So naturally players converged to the remaining strategies. Archers being so popular is probably also a completely different issue in itself. The lack of lag has more to do with it than anything. When unit micro wasn’t a thing like it is these days (I mean… really long time ago), archers weren’t nearly as good as they are now.

I’ve banned always arabia anyway because it was freaking boring. Maybe i can use my ban now for other maps if everyone starts hating arabia haha

Chill guys. Maybe play the map a bit more before making these judgments. Arabia hasnt been full feudal for a long time and now you think it’s the standard? Highly doubt that, people manage to wall up pretty much any map nowadays. Btw played couple of games yesterday with drush fc and worked up pretty well. Will decrease in frequency for sure but that’s totally fine imo. It’s still arabia after all. Naked fc gone? Yes, thankfully! Fast feudal, wall and boom gone? Probably yes, was about time this shouldn’t be a strat on open maps.