It looks like military units get attached to the last position they were when the player ordered them to stay in Defensive stance, and, under certain circumstances, they try to come back to this same position after finishing an assignment, like destroying an enemy building, for example.

After the house is destroyed, the Legions should have attacked the other ones, instead, they move away and go back to the position they were the moment I last assigned them the Defensive stance.

4 Likes
Weird behavior when using Defensive Stance and ordering an Attack Move
Will there be an update? + I'm offering support for the devs
Things that NEED to be fixed
Age of Empires: Definitive Edition Epic Bug List
DapperTrout1297 July 9, 2020, 7:57am #2

Exactly, it works more like the Guard command from Age II! And this is absolutely annoying, every time an enemy unit or building is destroyed, your units start marching away from the battlefield. It completely brakes a battle’s pace.
I’m excited with the renewed attention this game is getting from the devs for now, but this kind of problem with a new feature that was JUST implemented breaks my hopes that, one day, it will become fully functional. For God’s sake, I needed just one hour playing to identify and observe the circumstances under what this phenomena happens, how they launched this update without addressing that previously?! Like, do they properly test those updates before launching them? It’s unbelievable.

I also think they should correct the No attack stance behavior you mentioned. It could still cost some of our own units lives lol

And here’s a hilarious bug regarding defensive stance.

YES! I have noticed that as well! When ordered to attack move, the units run AWAY from the enemies lol
I hope the devs will not take, like, long six months to correct that…

One must wonder don’t they actually test their own work before? I mean this is kind of thing you should noticed immediately.

This issue is being tracked, thank you for the report.

Thanks for your response!

Issue:
Setting Defensive Stance and then ordering Attack Move makes units move forth and back (near enemies) without attacking them most of the time.

This is a known issue. Thank you for reporting.

An issue I also have, that I think only occurs with defensive stance on, is that units tend to move to the left corner of the map.

Where are my units ? Then I look in the left corner of the map and see them cuddling there, completely ignoring social distancing.
I had to continuously reoder units to their posts because they kept wandering to the left.

An issue I also have, that I think only occurs with defensive stance on, is that units tend to move to the left corner of the map

You mean like this? If that’s the case, it has happened regardless of stances (whether they are on, off, or non-existent like in the case of villagers).

Very awkward, happened to me in a hurry to destroy enemy wonder on a custom scenario
I moved most troops until a point and when they reach there, if they found any enemy on sight, they went to opposite or random directions

Build 46777
Units have trouble returning to their original point of defense. It is common that they end up spreading out, not occupying their corresponding positions: 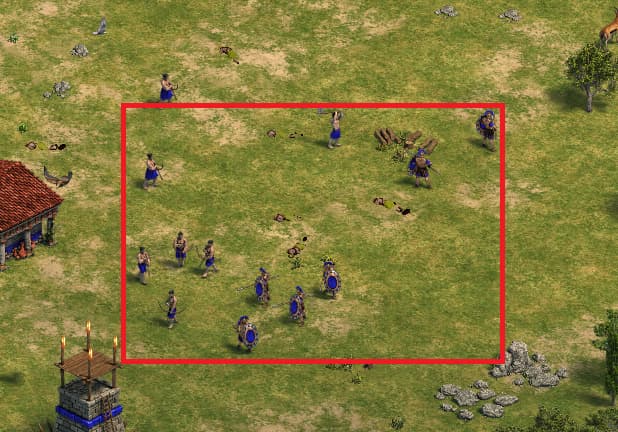