Brief Intro (some details may be wrong)
Xianbei (400 BC ~ 672 CE)
Pretty similar to Goth in Europe. They filled the emptiness of Mongolia after Xiongnu were defeated. They formed tribal states, invented the title Khan, and sometimes fighted for Chinese dynaties as mercenary or even joined Han army. After China collapsed during 3rd century Xianbei people established some kingdoms in North China within the Great Wall and started sinicization. In 386 CE the Northern Wei Dynasty was established and unified whole North China, started a 200 years of north-south division of China. In 548 CE a rebelled general from Northern Wei called Hou Jing almost destroyed the south. Then in 581 CE, Xianbei’s Northern Zhou dynasty, successor of Northern Wei, on its way of unifying China, ended because Yang Jian took power of the court. Yang Jian finished the job of unifying China and established Sui Dynasty. The founder of Tang dynasty later on has Xianbei blood. Last purely Xianbei kingdom is the Tuyuhun Kingdom which ended in 672 CE. The founder of Western Xia may be descendent of Xianbei. Northern Wei’s imperial court heavily sponsered Buddism, and for the first time, monks were sent to India to bring back scripts and misonaries were sent to Japan. 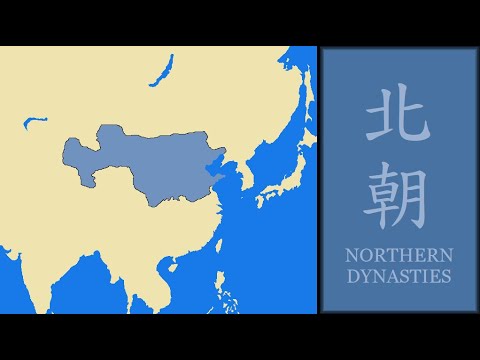 Hephthalites (400s CE~ 700s CE)
Normadic people of central Asia, also known as White Huns, Hunas, Yeta. They may or may not be related to European Huns. Assumption of their original homeland include Southern Kazakhstan, Central China or Uighur region, and they speak various language including Bactrian, Sogdian and east Iranian. What is certain is that they took Bactria (Northern Afghanistan) as their stronghold around 450 CE and started to expand in all direction like the Mongols. Invasion on the Sasanid Empire started from 420s, in 482 the Persians were badly defeated and forced to pay heavy tribute. In 480s a branch of Hepthalites called Alchon Huns wiped out what is left of the Kushan Empire and conquered Northwest Gupta for decades until 528, bringing an end to classical Indian civilisation. In 479 they reached east end of Tarim Basin and completly conquered the area in 509, making them bordered Xianbei’s Northern Wei. Northern Wei called truce with Liang China in the south to avoid two-front war. Hephthalite Empire was eneded by the allied Goturks and Sasanians in 557, after the Battle of Bukhala, but was still having their own nations under Turkic inflence. Hephthalites gradually lost their identity and emerged into other ethnic groups after 700s. They bought the tile Khan from Xianbei and unified all the buddist states along the silk road. Sogdia, the heart of their territory, flourished becasue of the empire’s wealth and the famous Bhuddas of Bamiyan were built under their rule. 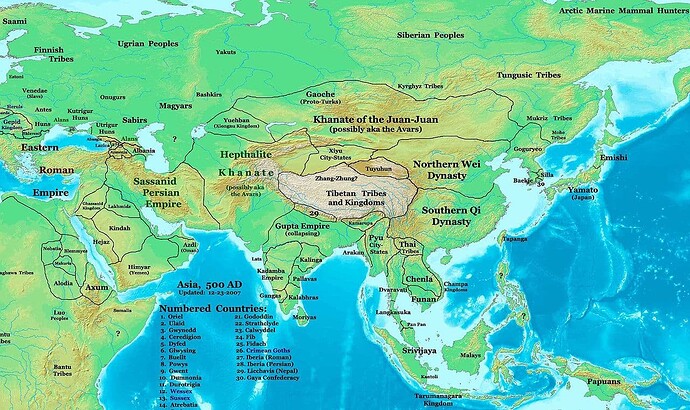 Tungusics (Khitan & Jurchen)
(to be continued)

Not really a fan. This is the first time I’ve heard any of these mentioned, suggesting that they aren’t particularly popular picks. I would rather have Jurchen and Khitans as different civs.

I would argue, that these civs were a bit too early for AOE2.

I think the Hunnic invasion and the Visigoth takeover of Rome are right around what is considered to be the start of the middle ages. I think whatever is intruduced should be more around the time from around A.D.500 to about A.D.1600

Jurchen and Khians is battle with Song Dynasties
It is not interesting ,and lots of mongolis belive that Khians is a bart of mongolia history.
But Xianbei contral north China after the time of Theree kindon（you maybe konw these history in CA game Totla War Three kindom DLC eight king）After six town uprising ，Xianbei north wei Dynasties be destory and apart Xianbei army suit another north zhou Dynasties .Until be coup by yangjian（han）suit Sui Dynasties （then be coup by Li Shimin suit Tang Dynasties ）
It happen betwen 420-589,it is really interesting history,not boring

I would rather have Jurchen and Khitans as different civs.

Even Khitans can cover Xianbei, since the Khitans are descendants of the Xianbei people.

Northern China is still a Han society, not a Xianbei.
This split is the wrong choice.

The Khitans are not Tungusic, and doing so is wasteful.
To think that the Khitans and the Jurchens are similar is obviously not enough to understand them.
The former has a high degree of cultural tolerance and is good at espionage operations, and UU may be a heavy armored cavalry shooter. The latter accepted Chinese firearms and established the strongest heavy cavalry in East Asia. Enough to develop two distinct civilizations.

Jurchen and Khians is battle with Song Dynasties
It is not interesting ,and lots of mongolis belive that Khians is a bart of mongolia history.

Many Chinese players are looking forward to their introduction. they are necessary that the war during the Song Dynasty can be presented.

According to the literature, the Mongols and the Khitans did not think they belonged to each other at the time.
The Khitans are part of Chinese history too, but only because they lived there. The Xiongnu, Xianbei, and Gokturks also appeared in the Mongolian Plateau, and they are also a part of Mongolian history, which doesn’t mean anything.

I belive you are not a Chinese player ,because in China history Song Dynasty just lost land and pay large number godden to Liao (Khians),Jin（金）(Jurchen) and East Xia （Tangut）also first time lost region comprising present-day northern Viet Nam （It became Vietnam,Ming Dynasty try to get back but finally lost again ,you could konw this history in Raja DLC ）.Who could like history of a loser?We like winner and honor . If must have a Dynasty to representative China in AoE2 ,we will choose Tang Dynasty history and have lot of civ could use （Uighurlar，Goguryeo，Tibetan）.

But that not mean Khians could not bacame a civ in AoE2,Yelü Dashi`s history how to run
away from Jin and build West Liao Dynasty equally interesting as Babur (New India DLC) ,just we have too much nomadic，that not fun,not interesting ,it is boring.

Northern China is still a Han society, not a Xianbei.
This split is the wrong choice.

I think the Khitan civ can be covered by the current Mongol and Chinese civs, so there’s no need to introduce a separate Khitan civ. Whereas the Jurchens and the Tanguts are more unique and there’s no current civ that can represent them. Jurchens can not only represent the Jin Dynasty but also the various peoples that historically inhabited Northeastern China, such as Balhae/Bohai, Sushen, Mohe, etc. Similarly, Tanguts can not only represent the Western Xia, but also partially covers Tibetans, whom are highly unlikely to be introduced due to well-known reasons. And last but not least, I think we could also introduce a civ called Dians/Zangkes, which principally represents Nanzhao/Dali, but also covers the various Non-Sinitic tribes that inhabited Southern and Southwestern China at that time.

Not really a fan. This is the first time I’ve heard any of these mentioned, suggesting that they aren’t particularly popular picks. I would rather have Jurchen and Khitans as different civs.

I would argue, that these civs were a bit too early for AOE2.

I think the Hunnic invasion and the Visigoth takeover of Rome are right around what is considered to be the start of the middle ages. I think whatever is intruduced should be more around the time from around A.D.500 to about A.D.1600

I put Hephthalite in mainly becasue the latest DLC shows that most players don’t complain about history accuracy or timeline as long as gameplay is creative. Very few people realized that Gurjaras gradually disappeared after 1000s yet still have gunpowder units like the goth. They are blurred with Aisan history, so early civilization won’t ruin game experience.

If you really wanna introduce new nomad civs, then Gokturks and Avars are more suitable for the AOE 2 time period than either Xianbei or Hephthalite.

As I said Xianbei is for a devision of the Chinese(cause the current Chinese is too mediocre), Hephthalite is to cover some early Asian civs. Gorturk is too similar to Tartars or Mongols, Avars is too similar to Huns or Magyars.

Why is the current civ too mediocre?

Gokturks arent similar to neither of those

I think the Khitan civ can be covered by the current Mongol and Chinese civs, so there’s no need to introduce a separate Khitan civ.

If there is really a limit of 48 civs, it is likely that the remaining 6 civs will all be African and Caucasian. In this way, Microsoft does not need to consider the history of China and modern political issues. Jurchens, Khitans, Tanguts… will all have no chance.

If there is no such restriction in fact, then there is no need to be so preoccupied with the quota. Especially the Khitans were such an important part of medieval East Asia. If the current Mongols cover the Khitans, it just means that the Mongols are also an umbrella worthy of division. The Mongols represent its empire and the four Khanates, which is already the rich and diverse content. The centuries of fighting of the Khitans are also worthy of another civ to represent. In addition, there are some differences between the Khitans and the Mongols in military, political and cultural terms. It’s like the Sogdians who represent the Eastern Iranians deserve to be separated from the Persian civ which actually represents the Western Iranians.

Of course, I am also very supportive of Jurchens, Tanguts/Qiangs, Gokturks, and Lolos.
(I think the term Lolos is safe enough. First, it is not the official name of the Yi people for the Chinese government, but the Vietnamese government. Second, it is a historical name.)
But I firmly believe that the Khitans have the same qualification. In order to create a DLC theme, it is also very suitable to be introduced with Jurchen.