Which historical civ could fit to the concept of buying horses (or camels) for gold which they could mount their foot units onto?

Pretty much everybody from south and south east asia fall into this category,horses are not native to these lands.

And Bohemians+Poles were in the game as Teutons as Slavs but we got them anyway.

But how shall they be designed?
They have neither cav nor gun powder. We already have an archer civs, an infantry+monk civ and a defensive+tower+flexible civ. What else could we have? naval civ sounds tricky without cannon galleon. a siege civ? a trash (spear+skirm) civ? maybe a spie civ that can somehow unlock enemy technologies in their own tech tree? an animal civ that can train snakes or whatever or maybe even tame wild animals on the map?

Because bohemians and poles weren’t teutons… tlaxcalans ARE aztecs.

They were pointless additions. I’m not the biggest fan of Tlaxcalans for the exact same reason I’m not fan of Bohemians and Poles but if we can get the two last ones we definitely could get Tlaxcalans applying the same logic too. Hell, Sicilians are literally Italians 2.0 and Burgundians Franks 2.0-

First, the Bohemians / Czechs are Slavs. Their kingdom consisting of other Slavic nations (Silesians, Moravians, Lusatians and more) was part of the Holy Roman Empire, thanks to which they are closer to the Germans in terms of civilization and culture than other Slavs.

Secondly, the presence of HRE rulers in Bohemians civ should come as no surprise since the Bohemian kings were also HRE emperors.

Well, I’ve always thought of Bohemians as culturally mixed. Like pilsens being more teutonic than the rest like slavic pragues. But that’s just my opinion. The bohemians are overall more slavic though. Kinda like the burgundians that are germanic-frankish. You can tell there is mix either ethnic or just cultural.

Tlaxcalans aren’t like that. They are full aztecs. Their ethnicity, culture, religion, language was exactly the same. Maybe with small dialect variations in some words preferences, like the English from LA and the one from New York.

I would like to see a meso civ with gold-cost free eagles (As a UT). But don’t get the eagle warrior upgrade in the exchange.
That would mix up the trash fights a bit

Besides that the Tlaxcalans seem to be a bit underwhealming indeed. Baiscally no eco bonus outside of water. The xolotl with the low cost seems strong, but I don’t get the point of a meso civ as a cavalry powerhouse. And without an eco bonus they will have problems to be able to spam the xolotls.

I could understand if we had an american civ with an Imp UT that then allows to make special cavalry units (cav archers / hussars). That could be interesting, but only as a very lategame addition, not in castle age,

Otherwise, maybe, if we want to have an american expansion, it might actually be the best idea to make a completely new design and add somthing like comanches, sioux, apaches… or whatever. With new local units instead of the eagle, cause the unit actually has too many functions in one unit what makes it so hard to deal with. Better make more destinct units than one which has only 1 counter unit in the militia line.

With their current design I am actually happy that there are only 3 mesos. The gameplay with them is already quite repetitive and they mostly just thrive from good early eco and other busted advantages. Without cavalry the game is just missing something, at least if the replacement is such a “jack of all traits” like the eagle.

Tlaxcalans aren’t like that. They are full aztecs. Their ethnicity, culture, religion, language was exactly the same. Maybe with small dialect variations in some words preferences, like the English from LA and the one from New York.

Don’t forget that the Aztecs aren’t actually speaking Nahuatl, so getting Tlaxcalans would be a nice way to smuggle it in like with Sicilians and Italians.

“Homogeneous” is the word I was looking for.
Mexicas, tlaxcalans and the other nahuas, with 2 exceptions, were homogeneous in all aspects though.
Sicilians-italians and burgundians-franks weren’t homogeneous.

Yeah, it’s been 20 years and that kinda bothers me too. I’d rather they update the voicelines to real nahuatl than keeping the current mayan dialect.

If you meant a civ from the modern-day USA then you run into another set of problems. Their development at the point was not comparable to the Aztec or Inca empires with large cities, in no small part due to their small population (fewer than 1 million on the total territory of the USA, while the Aztec Empire had a population comparable to France), and they wouldn’t come in contact with the Europeans until after the AOE2 timeline (early 17th century for the first British settlements, the Spanish had some missions founded in the late 16th century but this was much more peaceful than the conquistadores). Needless to say that in this time period they wouldn’t have horses yet since the horse had gone extinct for a long time and would only be reintroduced by the Europeans.

Their place is in AOE3 but not AOE2. 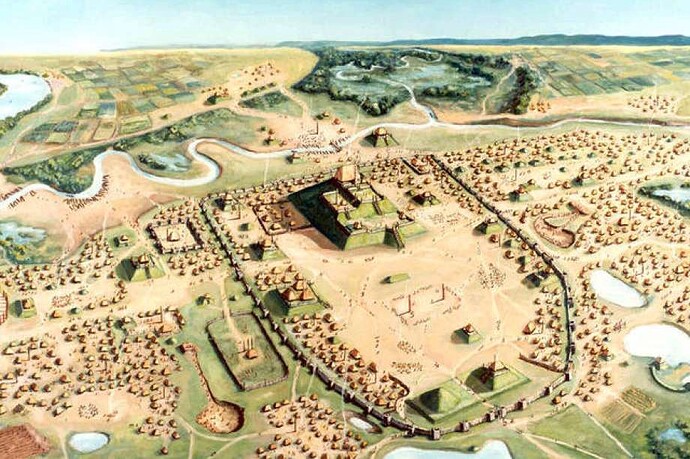 A Brief History of Cahokia Mounds

To everybody, the same standards which are applied to one region should be applied everywhere, and to be honest, the recent additions opened the gate for a lot more civs if we’re going down to the level of Duchies and would-be Kingdoms.

Don’t compare Mississippi culture to Mesoamerican and Andean cultures because they were not at all on the same level of civilization. You’ll probably be pissed off, but they don’t fit in with AoE 2 in any way. AoE 3 is the place to be for a variety of civs. There are highly developed civs in AoE 2 as well as nomadic ones that have had a great influence on the history of the entire globe.

If you mean LotW and DotD then all the civs added by these two DLCs were kingdoms that were very important throughout history. You seem to overestimate the Mississippians too much.

They could show up on some US campaign mission, but they would be too weak to be civ. Do you want to force add them to the game even if they were the weakest of civs? Maybe later you will want to add Polynesians and Inuit because they would represent regions currently unrepresented? I understand that there are non-European regions that are under-represented, but why add something that doesn’t fit the game just to make everyone happy? I would prefer to break the Chinese and Saracens umbrellas over the addition of Mississippians, as that would make much more sense - and at least fit in with AoE 2.

If AoE 2 had Minor Nations like in AoE 3 then Mississipians would make the most sense, but unfortunately it is not.