The classic FFA mode allows us to fight all against all, without teams, but it has some problems. Each game of this type base on the naive assumption that all players will play fair. In fact, many players do not respect the unwritten rules of this game mode and form teams basing on verbal agreements between each other. Then the game without teams becomes de facto a game with teams. This allows them, for example, to attack someone 2vs1, which due to the game mechanics and population limits is an unplayable situation for the attacked one.

However, this problem can be easily solved by adding a special FFA mode. It would be just like a normal FFA but with special “diplomacy” window (see below). There you would be able to declare war on a selected player or sign a peace. One player could fight with only one opponent at the same time and if someone would be at war already, you couldn’t declare war on him. When he would defeat his enemy or sign a peace, he would became “free” and then you could declare war on him. To sign the peace the consent of the both fighting players would be needed. Players that would be in peace couldn’t attack each other (just like in treaty games). The game would end when only one player remained on the map. 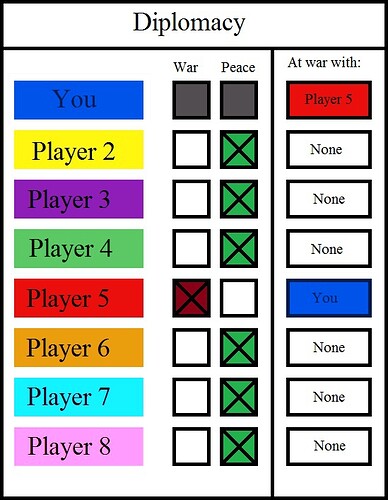 What stops me from teaming up with somebody, declare war to war to each other, never attack and free boom while nobody else can attack us?

The only way I see to solve that would be just to remove the option of making peace. Once declared, the war would continue until one of the players loses. Then the players you described would have no interest in teaming like that, because finally they would have to fight each other and only one of them would stay in the game.

The last option for almost free and safe booming then would be to choose the biggest noob in the game and declare war on him first, then calm booming with the possibility of quick elimination of the noobish opponent at your wish. However, this problem doesn’t exist in games without noobs.

Of course, but the whole discussion in this thread is about an optional mode, for interested ones, that would force you to do so, or at least make the game more fair/clean than in classic FFA.

The new mode could be called anyhow, and as I said before, it would be optional (just like KotH and other modes), so the old mode with classic FFA would still be available under the old button.

What you want is the ability to play 1v1’s in a bigger setting than the usual 1v1 maps, not an actual FFA game.

As I said before, it doesn’t matter what you call it. I mentioned the FFA just to outline the topic, as this mode would be the basis and starting point to work out the new game mode we are talking about.

There should already be some sort of diplo mechanics in the game, or atleast it was implemented in ESOC, i forgot if it was brought over to DE or not