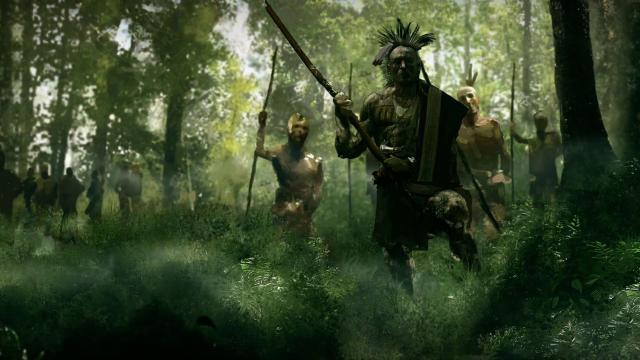 Attempted a translated summary with the use of google translate. Let me know if something important is missing. As said to the other interview that you posted, everything sound very promising!

It starts a little before the beginning of civilization in Age of Empires 2 and goes back to the dawn of the Renaissance. This is the period in AOE 4

One thing we did in Age 4 was that the gameplay was driven by history (…) Unlike previous Age of Empires games, our civilizations are now farther apart in terms of gameplay.
We have this wonderful spectrum of all these civilizations, ranging from “very understandable for people who already have experience with Age of Empires” to “things that have never been in Age before.” It was really fun, because it opened a completely new category. the things and varieties that we can discover and play, when those were pretty fixed on previous AOEs.

The entire team of historians / relics experts, designers, producers and artists has traveled around the world researching civilizations to make sure we get these things first-hand. We want to be faithful to civilizations. Instead of a local expert, we preferred to visit a Mongolian historian in Mongolia to talk about what the Mongols did and what their tactics were. We went so far as to make sure that everything we did was historically accurate

Number of civs and diversity

(…) definitely more than two. I can confirm that. We have a fascinating group of civilizations. I would say they are probably a bit more diverse than the ones we had in Age of Empires 2. But it is an interesting mix.

So for a year now, there have been community players playing Age of Empires 4 behind the scenes. We will continue this and enlarge the program, because we definitely want to be in contact with the community, in all games. We did that with the third part. All parts without exception have grown and improved with the help of the community and the fourth part will not be an exception.

(…) we have taken on the time of the Relic Engine. Relic has this incredible RTS engine. But we wanted to modernize it. We wanted to make sure she worked just as well on laptops as on tower PCs. And that was a lot of work. We spent some time re-modeling the basics and devoted some time to the game features.

Everything in the trailer is part of the gameplay

Everything you see in this teaser is actually in the game. Everything in it works as a finished object. They all have a role, all one work. You have noticed in the trailer, the people on the walls. That’s a big part of the game, wall battles and sieges.
You will not see anything here and after we bring it out you’ll suddenly ask, “Hey, where is this one thing !?”. That’s all in the game

Relics Philosophy and a modern approach

It’s a mix. This is an Age of Empires game. To be honest, Relic took this so seriously that we sometimes had to say, “Come on, get laid back, you do not have to do that, let’s take that a little further.” Relic is such a great partner and it’s so nice to work with them on Age of Empires 4.We have found a wonderful balance to maintain what was great about its predecessors. This is a modern RTS game, civilizations are, as I said, farther apart. It is intended to take a more modern approach to our design and not stick to old decisions.

(…) all our developers work together. Forgotten Empires is working on content that can also be found in Age of Empires 3. Relic works on technologies that are present in all Age of Empires games. But Forgotten Empires was also involved in our focus tests. They gave us feedback for the game, they help us build what is so great about Age of Empires.
(…)That’s why we are very consciously looking for our partners around the world. We just wanted some teams that could help us bring forth the next generation of RTS games. (…) The idea is to make sure that the development process is as global as our player base.

I can say that we will have a completely different approach, unlike an Age of Empires game or RTS games altogether. There will be stories to tell and hopefully they will be fun for the majority of players. Yes, there is a lot of storytelling, there are campaigns, everything is going to happen in a very new way. Keyword: “Humanized History”. History accessible to everyone. History is only as interesting as the person she has given you. We want to be the most passionate fans of history, so players can become part of it and really learn a lot from it. On the background and technologies of the war, but also on everyday conditions of the time. I can not tell you more.

Every Age of Empires is unique. And so it is in the fourth part. Age of Empires 4 does not play like Part 1, 2 or 3, it plays like an independent game of its own. It has a special feeling, its own focus, its own nuances. So if you liked Age of Empires 1,2 and 3, you will find a lot of elements in Age 4. And yet it will be a completely new experience.

People often talk about beta or alpha. We have gone away from it and move in much smaller scale processes. So we’re starting to let the game play by very small, specific groups and get feedback. So if new features appear in this process, we will also report on them.
We also have Age of Empires 3: Definitive Edition, which we have not shown yet, but it will come soon. So we also have other things that will come out in terms of the Age of Empires franchise. You can therefore assume that we will talk about it soon.

4 Likes
What would you want out of the Age 4 campaign?