Age of Empires IV interview: “it is absolutely not past the time for RTS”

We speak, exhaustively, to the devs who hold a beloved strategy series in their hands

SL: But there are some things that Rise [of Nations] did really well, too, and we are keeping a lot of that in mind.

Please not spheres of influence. I really can’t remember liking much about RoN; but this was one annoying game ‘feature’ for me.

Cool, I’ve waiting for this interview to be posted. So sad that is just a collage from all the other news posted before by PCGamesN with some new things here and there but nothing really relevant, sadly for us.

What a horrible website. All this interview has been posted in bits in the past, and they released the whole interview now. What a bunch of jokers.

They need those hits man.

The other day i had re read the article and this part in particular (the highlighted one) make me think: 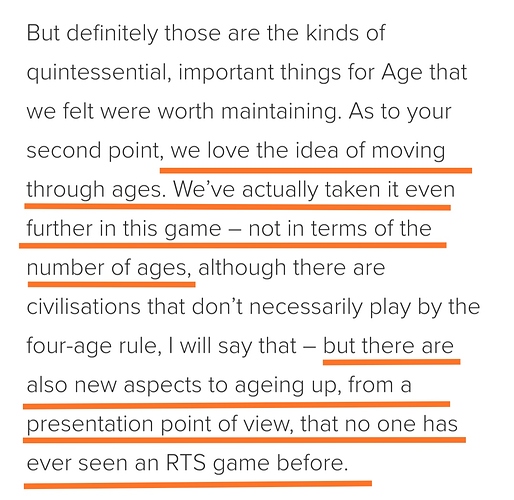 What if now every time you Age up all your buildings enters in an under construcction phase with scaffoldings and all that to update the buildings visuals, and at the same time, you can’t produce units (like soldiers, villagers, etc) or research technologies till ageing up ends.
It would make Ageing up a tactical decision to choose when to do it. You will need to have some soldiers to defend yourself since you won’t be able to produce units till the new Age reachs up.

sounds really annoying. sometimes aging up takes a bit and it should but to be totally unable to do anything until it finishes sounds rough and just slows down the game considerably. even another towncenter wouldn’t help you keep up villager… it just seems like a radical change to how the game itself is played and not in a good way.

Depends of. At first i was exactly like you, but then i thought if the ageing up times are a bit faster it shouldn’t be a problem keep your base safe for 1 or 2 minutes. Specially getting to the last ages, population limit will probably be high such as +350 more or less i believe so it wouldn’t be a problem having a fat army ready in your defenses just in case.
It can be annoying if the enemy attacks and you are not ready i know, but well be sure to build up your towers and walls before going further

but even then that’s 1 too two minutes you cant do anything. its stalled. Like what about those times someone rushes you and you don’t really have the compacity to fight it but you know you can hold off till your age up finishes and then you can have something to deal with it… you’d be dead in the water.

‘Well make sure you have an army or defenses ready’ I mean sure but you’re pretty much shoehorning everyone to make up a defensive army and tower up. theres going to be no like fast castle strategy or anything because if you ARENT being defensive you’re going to be easy pickings for an attack when you try to age. ■■■■ its even a pain the other way because if you’re pushing in someones base you’re not going to be able to make fresh troops if you decide hey I want go to imperial so you’ll just have to stay down so you can keep units coming…and if they still manage to fight you off or their teammate attacks you…then what? do you age to try and catch up? do that and you’re out of the game for min or two and they can get troops replenished or push back on you now.