Images of voyageurs, coureur des bois, and other pioneers canoeing through the rivers of the beautiful northeast wilderness brings peace to my heart.

Love both the setting and map design. Right up my alley. Great work as usual, Moozilla.

Looks like you got a little inspired by some of these. 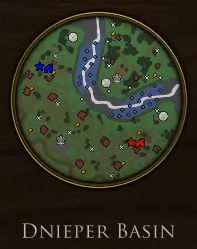 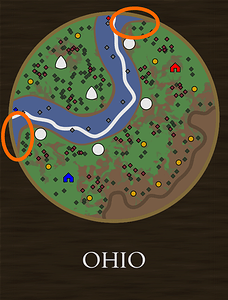 With this layout, I was designing things with an impassable river in mind. The problem with a relatively thin river with no land crossings is that docks could be constantly destroyed before ever being created (This could potentially be an issue on Budapest). My solution to that was to have the river bend along the edges (circled in orange) to give enough room to build docks that could be concealed by the fog of war. Achieving that might take a slightly wider river than my depiction, but it would still look similar. That shape also has the benefit of looking really good which is a nice bonus. The new Dnieper Basin map has the same aesthetically pleasing look but it doesn’t really take full advantage of how this can minimize the width of an impassable river that can be fully traversed by ships. 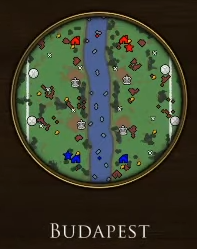 Hopefully, some of these new map features like naval trade routes eventually make it to the older regions that lack them.

The Budapest map is reskinned from @dansil92 's map Mississippi and made into a 2 towns map. The river is traversable in 2/3 spawns.

Well done @M00Z1LLA, I just discovered the topic and your ideas were both brilliant and brilliantly exposed

@vividlyplain Thanks for implementing these innovations, it’s nice knowing devs can find some inspirations from players at times, on top of their already fantastic creativity!