Because Age of empires III playing in the colonisation era I miss Australians from the game, and because it is a federal typed state it could have challanges just like this US nation had, the difference would be the challenge’s number. [Australia has less counties.]

New Nations:
Because you created the US nation I could imagine all the revolution nation, like Hungary, Mexico etc. However the warchiefs patch was based on similar idea taking the tribes from trading posts, and US as a revolution nation was taken from revolt nations to normal nations.
Here could be a twist: playing as a revolt nation like US should have a revolution also but only 2 coice:
1st: As US being British again OR Becam outlaw:
Outlaw means your troops must be inside your town center, or outposts, or forts, or explorer’s inner ring in order to not lose them, because if you would send them out of that circle what we can see when we place the tc wagon then they rebel and became uncontrollable outlaw forces.
For example you send them to your enemy’s teritory and as they leave your city the rebel, and when they arrive to the point they start attacking everything even wild animals.

New maps:
Because you (developers) implemented a lot of area, like desert maps, and island maps, I could imagine African maps, because these nations colonized Africa also, and that’s a huge continent with a lot of tribe/nation chance.

Protect the town:
-Defenders: In this mode any nation who would be the defender should start with 2 TC and every
building even 2 factory, placed like a town, or a city.
Forts and Outposts would create a defending line, the only the defenders would have is their villagers.

-Attackers: Start with 3 TC wagon, 3 factory wagon and some soldiers it could be chosen by the
players at the beggining.

Colonization:
-In this mode you can play only connected maps. For example if you start with New England then you could choose only Great Lakes, Carolina, Saguenay, but if you would Start at Mexico, then you could choose any ocean connected islands or lands like Caribbean, Hispanola, Bayou, Florida etc.
This mode would require a map checking list, like in the US challenge.
Here should give a twist:
You could choose allys and enemies, and every single time you are going to facing with them, and all your allys your civ, your enemies would be locked until you finish a continent completly.
The difficulty would be locked, because in the beggining it should be easy, but the end it could be hard, but NOT extreme, because that should be impossible.
And if you lose a territory then you have to fall back the previously played map, and the difficulty would drop from hardest to moderated.
Every 3 win should mean 1 difficulty increase and every 1 lose would mean 1 difficulty drop.

My wish is to have the same number of civs/nations as the ones in Wars of Liberty which is 40+ civs.

IMO Australia would be a bad idea since it doesn’t fit the time frame or – more importantly – the thematic focus of AOE3. If you want to relive Australian history just play as the British.

No more revolutionary civs as main please, they feel extremely out of place and too modern to be a starting civ in a colonial/exploration themed game coughs USA coughs

Would Argentina, Canada, Hungary or Finland really be a priority when you’re already missing Persians or Danes?

Well I think personally the colonization era was from mid to late 15th century, and till the post colonization times which means small islands.
Let’s gather the ages:
-Discovery age ~15th century
-Colonial age: ~15-16th century
-Industrial age: ~18th century
Imperialism: ~15th century to ~18th century
’
The economy of Java changed somewhat after the importation of the coffee plant in 1696. Coffee, often simply called java, rapidly became a major island crop and was exported from there to Dutch America. The company had earlier brought coffee to Ceylon (now Sri Lanka), but that experiment had failed when a blight attacked its leaves. The company ousted the Portuguese from Ceylon and dominated the island until it was itself dispossessed by the British in 1796. Under its jurisdiction, as earlier, the major Ceylonese export was cinnamon, though the Dutch also dealt in jewels and pepper and carried on a trade in elephants.

’
Three periods in the modern era witnessed the creation of vast empires, primarily colonial. Between the 15th century and the middle of the 18th, England, France, the Netherlands, Portugal, and Spain built empires in the Americas, India, and the East Indies. For almost a century thereafter, relative calm in empire building reigned as the result of a strong reaction against imperialism
’

So in these articles we can find clearly that the whole Age of Empires III is playing in the late 15th century to the late 19th century, in this case Australia should be included.
And because it not just talk about america, but about asia also, I think then it already not fits its primary object that was american colonization. 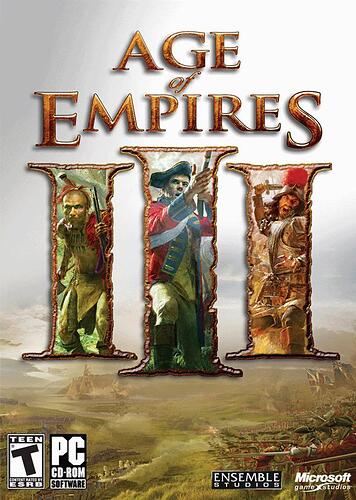 To write a new article, just enter the title in the box below. width=24 break=no buttonlabel=Create new article prefix=Age of Mythology: Not sure where to start? The Community Portal is a great place to learn about the wiki. It contains information... 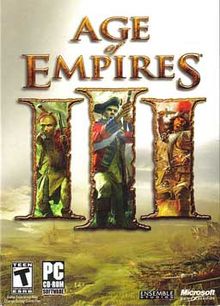 Age of Empires III is a real-time strategy video game developed by Microsoft Corporation's Ensemble Studios and published by Microsoft Game Studios. The Mac version was ported over and developed and published by Destineer's MacSoft. The PC version was released on October 18, 2005 in North America and November 4, 2005 in Europe, while the Mac version was released on November 21, 2006 in North America and September 29, 2006 in Europe. An N-Gage version of the game developed by Glu Mobile was releas...

Western colonialism, a political-economic phenomenon whereby various European nations explored, conquered, settled, and exploited large areas of the world. The age of modern colonialism began about 1500, and it was primarily driven by Portugal,...

Colonisation | History Of When Australia Was Colonised

The colonisation of Australia had a devastating impact on many Indigenous people who lived on this land for thousands of years. Learn more about the impact. 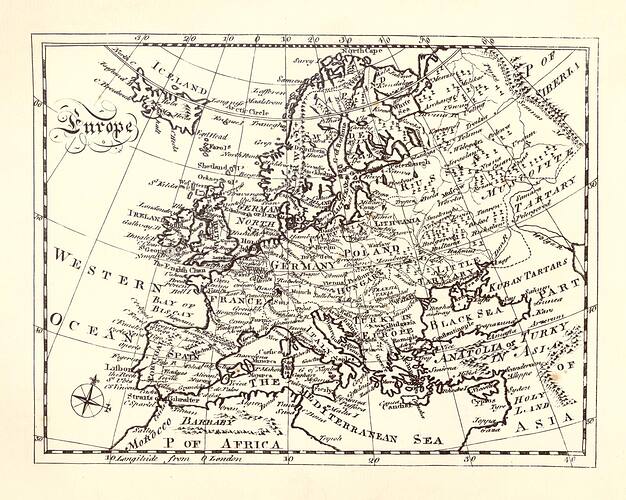 History of Europe - Discovery of the New World

History of Europe - History of Europe - Discovery of the New World: In the Iberian Peninsula the impetus of the counteroffensive against the Moors carried the Portuguese to probe the West African coastline and the Spanish to attempt the expulsion of...

Western colonialism, a political-economic phenomenon whereby various European nations explored, conquered, settled, and exploited large areas of the world. The age of modern colonialism began about 1500, and it was primarily driven by Portugal,... 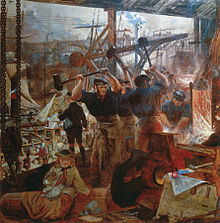 The Industrial Age is a period of history that encompasses the changes in economic and social organization that began around 1760 in Great Britain and later in other countries, characterized chiefly by the replacement of hand tools with power-driven machines such as the power loom and the steam engine, and by the concentration of industry in large establishments. While it is commonly believed that the Industrial Age was supplanted by the Information Age in the late 20th century, a view that has ...

Imperialism, state policy, practice, or advocacy of extending power and dominion, especially by direct territorial acquisition or by gaining political and economic control of other areas. The term is frequently employed in international propaganda to...

imo shouldn’t have australia as a nation becuase of the draussi_ongo fella!

what did u mean on it?

Aussie Drongo is the biggest Age of Empires 3 youtuber/streamer at the moment, and he is Australian. And @KingStarscream9 have some beef with him. See this video for more context:

About the topic, I think it would be nice to have Australia as a playable civilization. People on this forum keeps complaining that does not fit the time frame, when the game is literally about colonization, and the colonies have such important roles on the whole colonization as they colonizers. And I will love to see new content to game, and Australia would be a nice adition.

Ok, I don’t care if there is an australian who burnt this page, actually i don’t care anybody’s behave, cus 100% of the times i’m playing with and against AIs, the one thing why i’ve simply sugested, or asked is because of having fun, nothing more, nothing extreme, or nearly political aspect…

Oh yeah, what happened to the best of nine show match between @KingStarscream9 and @AussieDrongoBBQ we neeeeeeed it, to settle a rivalry more iconic than any other

Man, that is unplayable. This is not League of Legends to have 100+ champions. SC2 for example has only 3 factions and still better than AOE.

I highly doubt that, 40 is more than aoe2 and aoe3 is designed to have less civs than aoe2 but have more differences between the civs, pretty much a quality over quantity approach we have 18now, I think the ideal number would be 23 with the new civs being, Hausa (confirmed already btw they showed the Hausa flag with the 2 clips of the African civs) Ethiopia(would make sense because they were the only African nation to fully maintain independence) Persia(Persia was a place both the British and the Russians wanted to colonize but decided not to do so because they didn’t want to be in close proximity to eatch other) Danes (Danes make sense because they were the enemy of the Swedes and Denmark had minor colonies in both Africa and india and either poles or Italians idk, feel like poles would be more unique, but Italians would make sense because Italy colonized Africa

r/aoe3 - What Are the Biggest Balance Differences Between This Game and...

“don’t you have a showmatch to be wussing out of?”

“Haha there is nothing to prove from a few games of AOE3. I was thinking about it but observing community activity has convinced me that instead of a fun little drama event, it would simply perpetuate toxicity and division in our shared AOE3 community.”

I find it ironic how the topic of this post has descended to this, but yeah good point

sorry for my role in this, couldn’t help but troll starscream

There could be a few maps of Australia though. It could be an idea for a modder out there…