I usually don’t complain about some little bugs after new updates are released but this time it hurt me much, i love everything about design and graphics in aoe2.

2 Berries have a new strange look, seems like they are recolored, Ornlu had cached that first in his PUP review

damn i wish you included some screenshot so I didn’t have to fire up the game just to take a look. fml the white color replacing gray now stopped working, now its gonna be hard to find gray colored units behind walls or buildings

Huh, I wonder if that’s tangentially related to what I’ve noticed relatively recently (though not sure if I saw it before patch as well), where usually on Black Forest, there’s certain biomes and thus colour… but recently there’s been different tones for those biomes as well. Like I felt as if something was off, though personally I welcomed the change (and some biomes were hard to see on, so the new tone actually made things easier).

Apparently that was a bug, this was reported elsewhere on the forums and a forum mod forwarded this to the team as it was unintentional or something?

Might also be related to how they updated the assets or something, and maybe stuff went wonky in that move, could also explain other asset-related problems (I’d expect terrain or biomes, berries, etcetera to be part of it, and I also remember hearing about how that move made some mods harder to make work). I’m keeping that very vague because I’m like 10% sure if any of that is true.

Apparently the game has stopped using pallete system, that’s why those player color pallete mods are not working.

Unlike the original AoE2, each graphic in AoE2 DE before the latest update had its own 256-color palette rather than a shared one, so color reduction was different in each case. Some sprites may also have had less red or blue. In the original post’s specific example, the deficit color was green.

What’s the way to restore the effect of palettes?

there is a color tab in AGE3, I think that one will still work

At present, player color mods still have an effect on old sprites in the old SMX format, e.g. sprites from events and old mods. The mod problem seems simply caused by the new SLD format being different, requiring another method to apply player colors, which has created new bugs and cut off mod support (perhaps by an oversight). For example, see player colors on collapsed buildings.

Apparently the game has stopped using pallete system, that’s why those player color pallete mods are not working.

The “palettes” mentioned in your quoted post are not the same thing as palettes of player colors. What that post is actually saying (long explanation below):

The earlier SMP/SMX sprite graphics use indexed colors. The raw images of these sprites would be in 24 or 32-bit colors, and far too large for our home PC’s hard drive or RAM to handle. Instead, each sprite file stores colors in 8-bit, “indexed” to its own 256-color palette that only contains the colors it needs.

In this day and age, that’s a rare and very “retro” approach, and behind the scenes, it actually takes heavy CPU operations to get it off the ground. Instead, most current commercial games use “lossy” algorithm-based texture compressions innately supported by modern graphics hardware, which is exactly what the August update has switched to. The new SLD format has generic 16-bit colors, compressed with standard algorithms (BC1, a.k.a. DXT1).

On principle, BC1 can make a texture slightly mushier or blockier than the source image - some small color details get lost, some smooth edges turn into blocky zigzag. Matthew Pritchard, lead programmer of original AoE1&2 who also decided on the Definitive Editions’ indexed colors approach, explicitly cited this loss as a reason behind his choice:

[StarCraft: Remastered] uses DXT compressed textures, which are great for 3d Cards but have a specific, less-accurate look, when compared to the original game’s 8-bit sprites.
AoE:DE and AoK:DE use much more complicated 8 and 10-bit Indexed sprites mixed with projected 3D layers, which gives a different ‘look’

However, as the AoE2DE art switch has proven, MattP had a major blindspot in his reasoning.

Traditional artworks of 256 (or lower) colors in games like original AoE1&2 look astonishing, because they have handcrafted palettes, where every color is carefully chosen to pull its expressive weight, and the artworks are themselves made to fit in their palette limits. 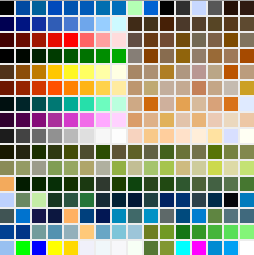 Conversely, DE’s SMX palettes must be auto-generated, and whatever method they used did a poor job preserving their intended colors, usually making everything darker & drabber. This process achieved the opposite of its goal to look crisp, incurring far heavier color loss than any side effect of BC1.

the switch to SLD is pure gain is what you’re saying? its nice to know load time and ram usage are reduced, hope this will improve overall multiplayer gaming experience. people on hard drive and limited ram using paging file would probably see decent improvement here.

Just hope that they will somehow fix the palette issue

Sorry not pure gain. I had a colour mod that made colours vibrant and distinguishable with p7 as black and it was miles better than what we have now

The color moods (night, desert, winter, autumn, jungle) that are used in campaign missions, szenarios and some random maps are also broken with the new update. hope this color bugs will soon be fixed.

You can modify the file “spritecolors.json” found in the “dat” folder, which is the new way to set player colors for sprites, but there is a known issue at present where this file can only be part of data mods.

Thanks, so does it mean we need to do something in the AGE3 editor to link the dat file to the modified spritecolors.json file? If so, what should be done please? I’m willing to give this a try.