Hussites were followers of a reformer Hus (pronounced whoss/hoos or simply not like hussar). They were Bohemian people (Dawn of the Dukes alert!) who resisted Christianity at that time.

The Hussites discovered that Defensive warfare >> offensive warfare. So let us use Defensive structures in offense. Sounds like Castle drops and believe me it is like that.

The movable structure, that is the Wagon itself, can move at any location. When asked to unpack, it turns into a 3×3 structure (similar to a Krepost) with 700 HP (+50% with Elite), 7/10 armor. It attacks every 2 seconds and has 6 base range. It has 3 secondary projectiles and ability to fire 5 max (by garrisioning archers).

Its attack is quite interesting. The primary projectile deals 10 melee damage, +10 vs cavalry, +8 vs camels, +5 vs infantry, +20 vs buildings. Its primary attack is unaffected by any upgrade. Its range can be altered by fletching line upgrades.

This building can create some anti-cavalry infantry units. The building can pack again, and move to some other location when ordered.

A 700 HP building is underwhelming, but a 700 HP unit is overwhelming. Kind of both, kind of neither. The main weakness of this unit is Petards, because of the +500 damage (+700 with siege engineers). 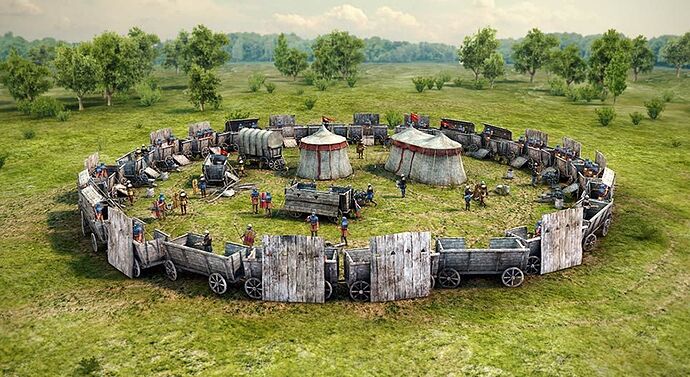 Another option would be to have it as a 1×2 and look like this when unpacked?: 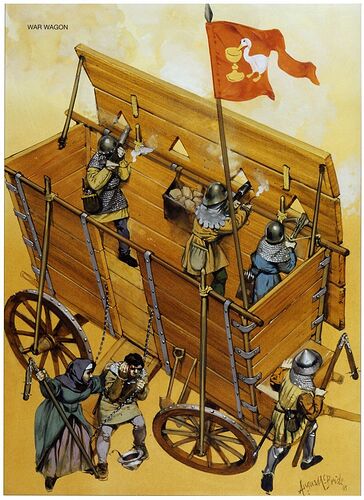 It’s and interesting concept! It seems very expensive for a castle age unit though, what are your thoughts on its viability in castle age? Would it be possible to train at the siege shop rather then just the castle so it isnt locked behind 650 stone, plus the high cost.

Also no other unit in the game has a pop of more then 1, not sure what I think of that.

I don’t want to be that person, I personally love You idea, but some things must be clear.

who resisted Christianity at that time.

Hussites did not resisted Christianity, they resisted Catholic crusaders. Hussites themself were christian sect that wanted to receive communion in the form of bread and wine. They also wanted to take away the property from the clergy that was really rich from paid church indulgence.

The Hussites discovered that Defensive warfare >> offensive warfare. So let us use Defensive structures in offense. Sounds like Castle drops and believe me it is like that.

The “wagenburg” strategy is not only unique to Bohemians. This strategy was used even by early medieval slavic nation to protect themself from Byzantines. That strategy was used by English forces in The Hundred Years’ War.

Also no other unit in the game has a pop of more then 1, not sure what I think of that.

You see 700 HP for a 5 pop space, feels like a PI Burmese Cavalier basically in Castle Age. And 210 HP with Elite.

Would it be possible to train at the siege shop rather then just the castle so it isnt locked behind 650 stone, plus the high cost.

About the attack of 2ndary projectiles. Basically researching Chemistry turns Crossbowmen into Hand Cannoneers so the attack boost and projectile change.

Also the primary projectile is a cannon, which I have not mentioned.

Idk. The whole idea has a lot of elements alien to AoE. Feels way to gimmicky.

Something like this is more conservative yet unique enough. A pack-unpack siege unit that fires gundpowder projectiles (like hand cannoneers, not like bombard cannon). Something like a trebuchet to take down armies instead of buildings.

I honestly love this concept. for the building size i would say 1x1 should be better than 3x3 since seeing 1 cart unfold into a full on krepost is just…
Also, you don’t have to turn it into a building, trebs exist.

I was already hoping for Hussites in DotD just for war wagons, and i think this is a perfectly reasonable execution of the idea.

There will always be controversies and i get that it is a strange unit, but just like every other civ we will have to wait and see what the meta is

The unit being gimmicky enough to add new features but is within the walls of Ensemble Studios, basically the pack and unpack thing.

I was thinking 1*1, since its just a wagon with an open lid, so infact it depends on the wagon size, and if its a krepost sized wagon the by all means

i was thinking generic arrows all around, since switching midway from archer to gunpowder is a bit weird. another idea is for it to be a secondary UU, and only available after chemistry