Next patch, some love for tatars and bulgarians

Eco bonus for bulg maybe. Even if is a siege technology discount

Trainable sheep for tartar in Mills

Sounds so abusable, in any map where sheeps are in high numbers that would be even broken

Why would having maps with high sheep have an effect? Wouldn’t it be the other way round?

If I don’t have starting sheep I would go ahead and create some from the mill. Cost 30f, 7 second train time, can harvest 150 (since tartar).

It could be limited, like only 6 sheep’s may be created (like cuman mercenaries), but I would limit it.

Let in be something like malay fish traps with unlimited food potential but quite micro intensive and slow since you need to keep train sheep in Mills manually.

Try out the scneario trainable sheep nothing to get a feeling how it would play out.

Trainable sheep for tartar in Mills

And burmese? They need as many help as bulgarians do

Then next we should discuss about Saracenes. They lose too many games. Ah no, the pro gamers know how to use a market and win many games with Saracens😂

And Turks/Italians?
Imo Turks and Italians need a very solid buff, then the other civs may need something minor.

Tatars could get a smaller buff as well.

Bulgarians and Berbers do not need a urgent buff, but still I would appreciate a small push

You never played Arena do you?

The concept sounds good and pretty unique. While I think tatars are in a fine spot I’ve heard people point out that their sheep bonus is not good enough. Maybe this could help with proper limitation for avoiding it to become abusable. Maybe making them cost 50 food in dark age and 100 food afterwards.

I do not understand the push to give Tatars more help. They are a great civ.

The only real weakness to the civ is a lot of missing armor on the Infantry, but that’s totally alright with me since their archer, cav, and siege trees are all extremely solid. I’m certain any significant dip in the winrate is mostly due to statistical anomaly due to low sample size and an excessive representation of Mesoamerican civilizations and Goths. The Tatars lack of armor on the infantry means a clear weakness to civs with the Eagle warrior or a similar unit where the Champion is usually there to chop it up.

To put it in perspective, the Mayans alone practically get 5x as many games played as the Tatars. The Aztecs and Goths get about 4x as much play. The Incas get about 3x as much. That means (assuming 1.5% play rate) as the Tatars, you have about a 25% chance to have a matchup against one of these civs where Champions is the answer to one of their dangerous options, and you don’t even get a good 2h-swordsman.

Additionally, low pick rate tends to hurt civs in win rate, simply because familiarity is a factor to take into account. I am not of the mind that the Tatars need any adjustments. Civs can have problem matchups. The Tatars have approximately a 53% winrate in games at 20-30mins at 1650+, which is where you’d expect the free techs to kick in and make an impact. That shows that the civ has distinct windows of strength that can be abused, and this early in the meta development it’s clear to anyone that the adaptation and meta around this civ is still in it’s infant stages as far as the game’s history is concerned. More changes, now, is way too early.

That is the reason i said burmese needs as many help as bulgarians.

Of course turks, italians, portuguese and koreans are higher in my priorities list

Less games played that tells already everything. Bad civ won’t get any high play rates and sample size is enough to show how weak Tatars are.

Tatars are nice but look at the rest. They are much better.

Less games played tells you less. Because there’s less games. Less games gives you less information to work off of. To argue that a lack of information is, by itself, information, is a shoddy and lazy argument. You don’t know that, you just want to claim that without evidence because it serves your position.

1.3% play rate, in a pool of 35 civs, means they’re getting a 1/3rd of the games that should be expected. That is a significant lack of information to work with. There is simply not a large enough sample size to support your claim. Which is why I don’t understand the push for Tatars. I play tatars. I think they are great. You don’t think so? Fine. Don’t act like the data supports your argument. It objectively doesn’t.

Here’s the opinion of someone you might care about. 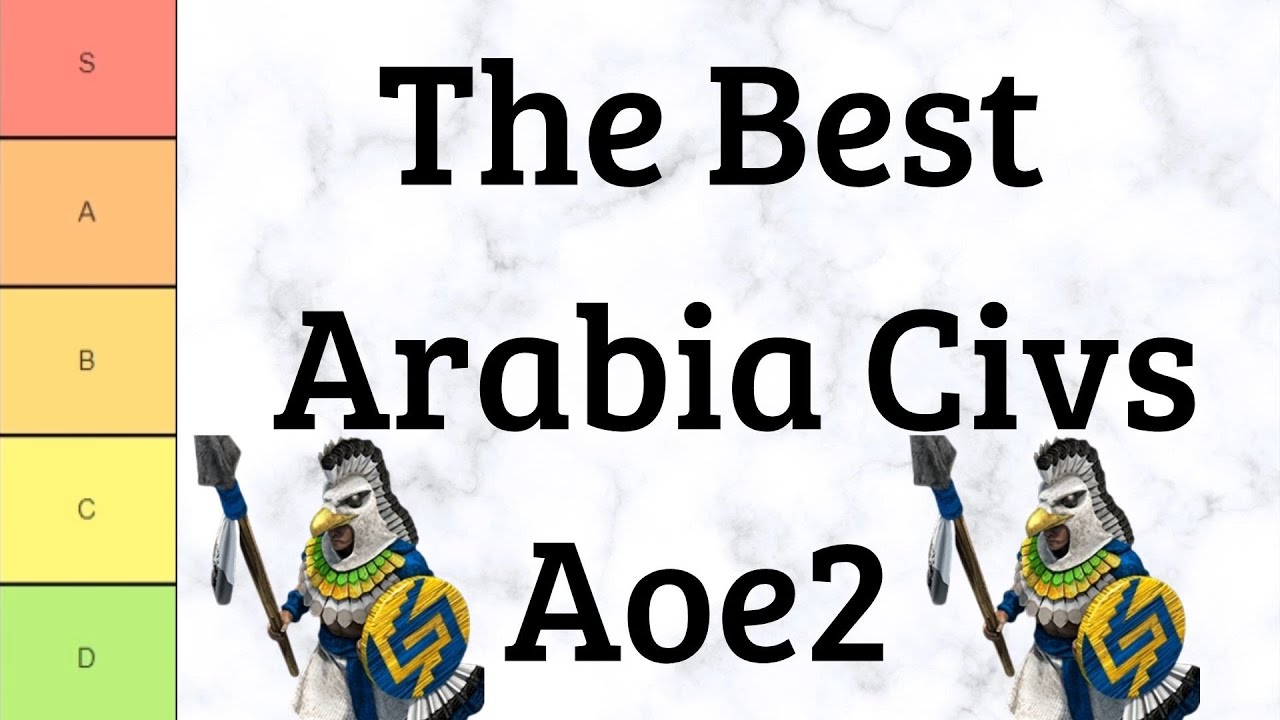 He says they’re average. Which is totally okay with me.

Less games played tells you less. Because there’s less games. Less games gives you less information to work off of. To argue that a lack of information is, by itself, information, is a shoddy and lazy argument. You don’t know that, you just want to claim that without evidence because it serves your position.

I think it could suggest that Tartars are perceived as a weak or tough to play civilization if the pick rate is particularly low but that depends on whether there is a correlation between pick rate and win rate. In any case, at 1650+ they have been between 42-46% win rate for the past four patches which suggests they are a bit below average

Stepping away from the numbers - my issue is that they are super predictable with cav archers / cavalry given their infantry is brutally bad. I think other cavalry archer civs have a bit more versatility than Tartars

I would advocate a buff to their late game as they seem to fall off very hard. My view would be to give them either two man saw for a decent eco boost or bombard cannon to increase the viability of their siege

And why you never see Tatars in Tournaments? Because there are 30 other civs that are better. I already play a lot with Tatars. Just for fun but if I really want to win or hoping for a bigger chance I play other Civ because I know they are stronger. Every argument you will give for Tatars that makes them strong I can give a lot of other arguments other civs are stronger.

You make some good points. But pick rate also gives us an idea what everyone else thinks of a civ. Instead of the extreme minority here. Yes maybe you think the civ is fine.

But the vast majority of players statistically feel that Franks gives them a higher chance to win and their confidence is so high that Franks are better, the pick rate is THREE HUNDRED PERCENT higher. 1.5 vs 6 (rough values from the last time i checked )

Imagine starcraft had one race picked 4x more than another race.

Besides the statistical analysis… Why is it fair according to you that a civ has an awful match up against 4 civs. Not 4 weak civs, 4 meta civs…

In contrast we have a power house civ like maya that has 1 bad match up against goths. So they crush other civs and are only weak to 1.

Tatar doesn’t crush other civs and is weak to at least 4. Balance?

By your own admission this isnt necessarily true. The sample size is too low to accurately say if that win rate in that time period is consistently accurate for 1650

And at the same time their pick rate is dropping. While power houses like Franks just have a higher and higher pick and win rate the more patches are released. Yay go 5 eco bonuses on top of an amazing military buff on one of the most meta units. So fair. Much balance.

Harping on the statistics in this way serves no purpose. The data is simply too thin to be interpreted with any sort of confidence, and it’s clearly possible to interpret it in vastly different manners. Put it this way - Tatars have excellent trash options with better-than-FU Hussars and FU skirms, leaving Halbs as the only sore spot in an otherwise flawless trash compliment. Yet, despite that fact, the Tatars have practically the same 40+ minute victory rate as the turks. Are you going to consider this an accurate representation of the lategame options the Tatars have access to, or would you agree this is a vivid statistical anomaly? Because that’s my point.

I think they’re in a fine spot and I firmly believe the data doesn’t support the position that they need buffs. Tell me why I’m wrong. Because if your answer is “data” you’ll need to explain why you trust the overall winrate with the 30% rate in ultra-late games.

Lastly, it’s okay for a civ to have obvious weaknesses. Not having a good champion is a weakness for sure, and I’m not going to claim it’s doing them any favors. But if you want to have a game with unique civs that all feel and play differently, you’ll need to have civs that have more obvious, and less obvious, weaknesses. Practically all the top players feel like Haboob is a map that you need scouts for because of how open it is and how far away the main woodlines are, but that’s not a good enough reason to buff the Mesoamerican civs in the eyes of practically anyone. When you’re focused on certain maps and game modes, it’s easy to miss the forest for the trees, and in this case, a map like arabia is distracting you from just how many maps the Tatars are unquestionably solid options on and that variety is a strength to be considered. I don’t think the meta has figured out how and where the Tatars are best at, what builds best take advantage of their bonuses, and crucially what maps those bonuses best apply, and as such, I reiterate, it is way too early for more changes.