No AOM:DE for 20 year anniversary?

No plans announced yet at least.

Huge disappointment. Hopefully they will announce something in October or November.

It’s too late. They won’t announce DE without a public beta.

Very disappointed, it had the potential to easily become
Best game of the year. So much of their statement of “WE didn’t forget about AOM”.

Too soon you would mean!

I’d love to see an AoM DE, but for all I know Microsoft doesn’t remember that either AoM or AoE1 exist.

Calm down everyone, there’s still the Gamescom (it’s celebrated in August). I’m totally expecting AoM there.

road map for aoe2de is released - some mysterious will happens in the fall. because someone has birthday. 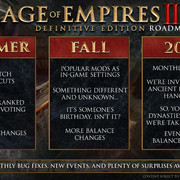 but all de-versions are from forgotten empires.

but yes, your point sounds realistic