No community feel in DE

Whenever I log on to play ranked I never chat with anyone. I find myself going to Twitch or Mixer less because I can’t see who is on and streaming like on Voobly. They’re pushing people off the platform to find the community why? The devs had one job. Make a good game and make the multiplayer like Voobly. Once the community was united and happy then you could add matchmaking and other BS. Why did they do it like this? What were they thinking? Did they not talk to a single pro player?

i understand your frustration about not being able to chat and interact with other people like in voobly, but let me tell you this
i have joined to the aoe2 community around 1 year ago. before that i was playing popular/modern games on and off, like dota2 , csgo, rainbow six siege, for honor and even a bit of starcraft 2
these games are from different successful gaming companies like Valve, Ubisoft, Blizzard, on different platforms like Steam, Uplay and battlenet. all of these games have kind of the same system as DE has, and some of them are even more straight forward in terms of getting into a game! im gonna show you some examples 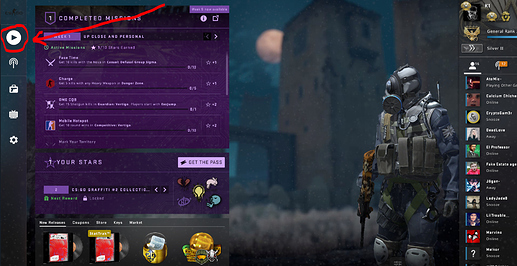 both of these games have an easy to join game method, you just open the game, click on the icons i highlighted, select the match settings you like and done, you are in the queue, there is almost no way to interact with the people who you didnt add to your friendlist without getting into a game ( between all of these games only dota2 has a chat box which lets you to talk with the players of a certain location, which is kind of useful sometimes )
the same goes with rainbow six siege, for honor, overwatch and starcraft2 etc etc
the truth is, good or bad, this is how the modern multiplayer gaming works! using lobby system for rated games which shows you the list of all the players online ( in friendlist or out of friendlist ) is not a thing in any game anymore. and for the community interaction part, you have steamcommunity section, reddit, aoezone, ageofempires.com , nczone, etc etc etc
from the point of view of someone who is used to see matchmaking system with a straight up click click queue in every game, this just looks right! this is how its supposed to be nowadays
now the real question is, did aoe2 survive 20 years because of the lobby system and massive players interaction options in the platforms like voobly? and it dies with a modern matchmaking system? or did it survive because of the people who kept playing it for 20 years and are still active on all the websites i mentioned?
in my opinion, DE’s matchmaking system layout and overall features, needs improvements, but the idea of eliminating matchmaking system (even temporarily) is a huge step back

The argument that these games have no community therefore Aoe2 shouldn’t have a community is not a good one and it will hurt the growth of the game. Why would you want to push people out of the game to a bunch of different sites that you mentioned for the community aspect of the game?

Those are also different types of games. A FPS game appeals to people of a different mentality and the matches I assume are shorter. I don’t care if they keep matchmaking they just need to add a ranked lobby and the ability to look at profiles and add friends. For a game like AoE2 it’s important and fun to chat beforehand. The standard play was to go random civs now you can’t do that if you want to give yourself highest chance of winning. Ultimately AoE2 has been played for over 20 years and DE was a huge step backwards in terms of multiplayer.

Probably this could be addressed by having a chat tab like Warcraft 3 or Diablo 2 .
Having the ability to create closed rooms and create a game for everyone in that room could be nice also.
Matchmaking is great for a quick ranked match.

It’s really kinda stupid that you can’t properly chat or even friend others in the game. The best I could get is to share my steam code with others in the lobbies, then we create some group conversations. Xbox player? Nevermind, we have no way to interact outside joining the same clan.

What makes it an exceedingly dumb decision is that AoE2 has been kept alive and growing because of the community, streamers, tournaments, competitive play, YouTube videos, etc. and the devs make this version that goes against all the basic principles that have kept the community alive and thriving for so long.

The devs had one job. Make a good game and make the multiplayer like Voobly

I’m sorry to say they had more than one job, and the latter part of your suggestion was not, necessarily, one of them.

Why get distracted by chat and seeing who is online anyways when we’re supposed to be playing a ranked match? That’s like soccer/football players interacting with fans on Twitter while trying to shoot a goal.

Players can chat in the game lobby pre-match… that should suffice, yeah?

What makes it an exceedingly dumb decision is that AoE2 has been kept alive and growing because of the community, streamers, tournaments, competitive play, YouTube videos, etc. and the devs make this version that goes against all the basic principles that have kept the community alive and thriving for so long.

There’s also a ton of players who play single-player or vs. AI with friends who have bought every AoE2 widget produced so far, too. Each AoE2 iteration attracts new fans, as well. All of this is adds to the sales numbers. Plus, word-of-mouth marketing from non-streaming, non-Competitive Play, etc. fans results in additional sales. I’d like to see some data supporting how AoE2 has been “kept alive and growing” simply because of streamers and competitive players. Maybe that’s the case, but if you don’t have numbers to back it up, it’s just conjecture. AoE2 could just as easily been kept alive and growing because a bunch of single-players and talented modders.

Players can chat in the game lobby pre-match… that should suffice, yeah?

If you didn’t understood yet by reading the whole discussion I answer it to you straight: no.

And I don’t understand how your reply to this discussion argue with the complaints of a lack of features and implementation priority for user interface interactivities between players in any sense, you just drive the discussion to other direction.

For unranked matches I would like to see and interact with chats and see who is spectating, if that’s not already happening. I like the idea for that

But for ranked matches, seems like interactions with the outside-world would be a distraction that shouldn’t happen. I read through the discussion, but, admittedly, I may not fully understand the need, desires, or issues because I’m not very impacted; it’s all fairly abstract for me, sorry to say.

100% agree with everything, nobody would play any of the top competitive games if they had an outdated system like lobbies.

@OP “It’s always been that way” is a really bad way to approach a remaster. If you don’t chat with people and don’t interact with the community that’s not the game’s fault.
Lobbies are still a thing, if you feel like playing relaxed TGs then go for it.

There’s a reason why game designer is a profession and also a reason why all major games implement a matchmaking system.

The tight community kept the game alive for so long. Dota, csgo, sc2 have much bigger player base. They can afford not being community-friendly and promoting anonimity instead. With Aoe2 is a different storyl.

100% agree with everything, nobody would play any of the top competitive games if they had an outdated system like lobbies.

Thanks to the lobby-like system of voobly the game is still alive. If it wasnt for the loobies of voobly which make it easy for everyone (plyaers, streamers, viewers) to find entertainment in the game, aoe2 would be in the graveyard.

Thanks to good network performance, community patches and a ladder Voobly provided the game is still alive. Not the lobbies.

Ladder has nothing to do with this… most of the people dont give a sh_t about what the ladder looks like. I have never checked who is on the ladder. What brought me to the game are actually the casters. And all because of the lobbies of voobly to make it easy for casting

did you even read what i wrote…

YES. hello… is anyone there!!!

Thanks to the lobby-like system of voobly the game is still alive. If it wasnt for the loobies of voobly which make it easy for everyone (plyaers, streamers, viewers) to find entertainment in the game, aoe2 would be in the graveyard.

This was exactly the same case for Dota and Counter Strike before Dota 2 and CS:GO were released. You probably weren’t aware of their communities because they were thriving using third party solutions which, while good, did not do so well at mass appeal simply because they were unapproachable by new audiences.

When their sequels came out with modern features (like matchmaking), their communities eventually blew up and went on to have much more mass appeal and each game has had multiple million dollar+ tournaments thanks to this resurgence.

Hopefully DE will follow these footsteps as the multiplayer features continued to be expanded, carbon copying voobly will not get us there, in my opinion.

Well hopefully DE does blow up. I don’t understand how MM does that. For me, the community and tournaments kept the game alive. There’s no community feel in DE.