No rotten soldiers on ground

As I see from trailer and that little video from home page, there is no dead soldiers getting rotten and turn into skeletons. This may be a little early to suggest but in my opinion they should add it back just like in original one.

I post this on wrong section can moderator move this to suggestion section or just delete and let me make post there ?

They’re adding that and blood in the late stages of development, I think. Don’t stress

I am relieved then

It’s too early to say, but I did see much less blood than I remembered. Not a huge fan of the censorship.

No worries, there’ll be blood and rotting corpses for sure in the final release, they just haven’t included it yet. There’s been some info from creators on this issue (on reddit IIRC)

Do not forget the origins, the body’s on the ground for 5 min, the decomposition of the body it was one big relevant characteristic of this master piece game. Please do not make the same you did on aof 3, the naval battles was great, but…

Good day, dear developers! Why are there no skeletons in the game? Is it possible to add a preference setting skeletons?! In the original, there were skeletons, but in the Definitive Edition there is no, it’s like!!! This is very lacking for the depth of the game… I believe that it is necessary to introduce skeletons and that they lay at least 10-15 minutes of playing time)

I think that they will not go this way with rotting corpses, unfortunately. In this renewed interest, it seems that the Age series wants to embrace more the family friendly side of the franchise, and rotting dead people is a no-no on this goal.

I understand that we all can live without the rotting corpses, but I think that bodies and ruined buildings could fade a lot slower. At the end of a long siege there is no evidence of the carnage that took place, and I think that this could be solved by extending the time that destroyed stuff and dead soldiers stays still. This would be just a graphical effect. If you choose to build over a bunch of ruins and dead bodies, you can do so.

I suggest a slider in the graphical options where we can set how much time stuff take to fade away, where the minimun is a little less than the actual default, and the maximun would take several minutes, so it’s up to the player to be cool about destroyed things being sucked by the ground like quicksand or if they want to say cadavera vero innumera after a significant face off.

Yeah, I want this as well.

It was cool in the original game to have this. Does the classic mode include skeletons or were they removed?

Yes, there is, just checked)

AMAZING! At least they didn’t remove that!

It’s the only thing missing for the game to be perfect, I’ve been waiting for it since it came out
XD

Well, the perfect game is still unfortunately far away, there are many errors in AI, campaigns, path finding, multiplayer, and even animations (armored elephant, Hello!!!)

I always worry some units merely “pretend” to be dead; then get up and walk away when I’m not looking.

Haha, you can loosen up. AI won’t stop attacking if it spotted you already

This is from the Enhanced Graphics Pack DLC’s Steam page https://store.steampowered.com/app/1039811/Enhanced_Graphics_Pack/ https://steamcdn-a.akamaihd.net/steam/apps/1039811/ss_7dc178e8e3adf04491c48a5a0704b18628ef8fa0.jpg?t=1573767992(image larger than 3072KB) We can see lots of decaying corpses on that battlefield, so this makes me wonder, if they were in the game, why were they removed and replaced with the less immersive slowly disappearing bodies/sinking into the gr…

People speculate it is due to China sensorship, and whatnot. Who knows, really. It’s a shame if so. Really liked the skeletons in AOE1, and although I did not play AOE2 in the past, it was probably an awesome detail to look at.

Does the HD version of AOE2 have them?

It is a sorely missed feature! (…) skeletons in the normal DE mode is what I want the most from in this game.

Started a new game with Classic Mode settings, and killed all my villagers just to be remembered of how cool this detail was. 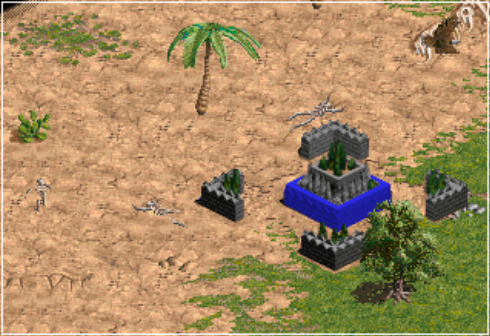 We need Blood and decaying corpese in every AOE, DE1 DE2 and DE3.
The longer the decay and the more blood the better.