Of all the cons that the game has, which one bothers you the most?

Cartoony siege weapons: the cannons should be impressive visually speaking, but without operators and shooting toy gun bullets they lose all credibility, and not to mention the ‘‘poof’’ effect when they are destroyed… they neither disarm nor break, just ‘‘poof’’ LOL the game loses a lot of immersion. 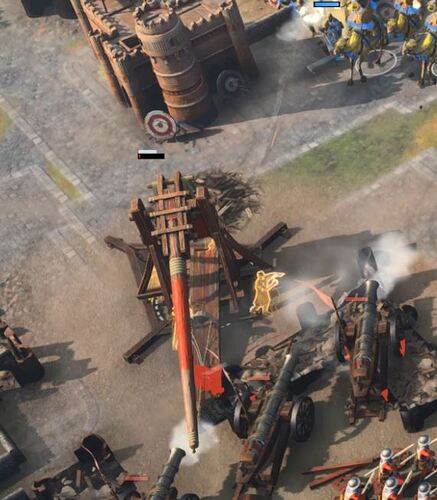 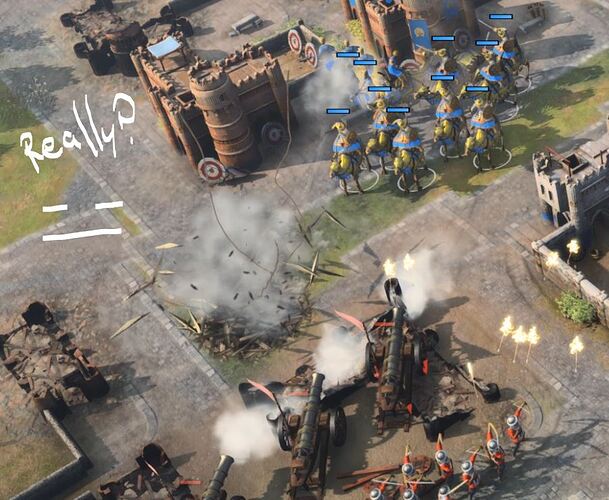 buildings are very difficult to distinguish: idk how to explain or fix it, but for me it’s quite annoying to always confuse the TC with the market or the barracks with the archery. 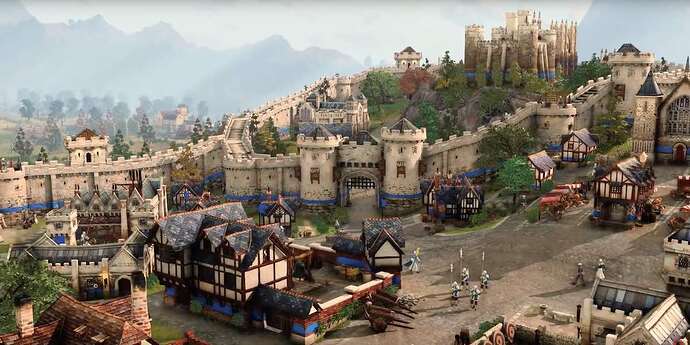 Team offensives are impossible with the 1 per click military units quee: or they fix the map grid or the queue, but once I build 4 archeries, 4 barracks, and 4 stables in the map there’s no room for my allies to build anything else (in middle map or ahead). If the queue was 5 units instead of one maybe would not need 4 buildings …

UI: have nothing extra to say, there are dozens of comments complaining about it.

Units without melee attack: why does cavalry change from spear to sword exactly? well if that has a reason to be then why longbows or gunpowder units dont have melee attacks like in AoE 3? they keep firing arrows instead of melee attack 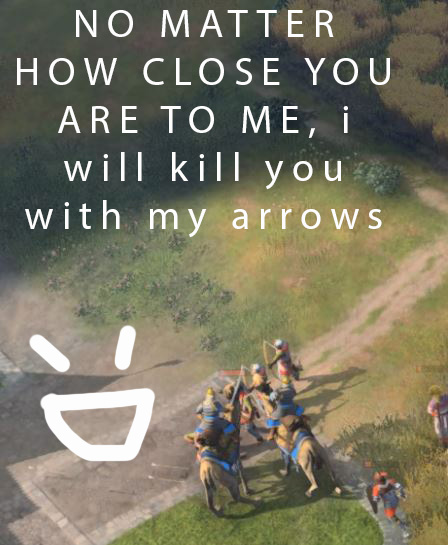 Units are robotic and generic: why archers and gunowder dont have charging animations? (AoE 3 is a good example of very well animated units) come on guys add some love to those units…we want them to feel alive not robotic, the game is lacking a lot of love and effort in animations … even the chickens from tc and horses from buildings should be animated

COH scam (lol sorry again): when I heard CoH devs will make this game my first thoughts were units in buildings firing things, tactics, destructible bridges, insane physics, well basically all the cool things from CoH added to the core gameplay of AOE, that would be epic…but it ended being a disappointment? nothing cool from COH and just everything like AOE 2 with gameplay of AoM. Why did not they put some extra love and effort into innovating? Beta would have been a parameter to test something different and see people’s reaction, but they did not do anything new?

I could keep mentioning some more … But what are yours?

P.D will be posting for top favorite pros of AOE 4 as well.

If I had to pick only one, that would be it, alongside the unit icons.
But all your points hit home.

Oh man totally, I can perfectly add that one too, even missed it in COH 2 when it was so common in COH1, it makes the game so fun and enjoyable.

Damn you speak the truth, looks like AOE 4 was made by devs who don’t regularly play AOE games. Infact don’t play any games. This is a bit sad to see. I think English archers switched to knifes in melee.

play any games. This is a bit sad to see. I think English archers switched to knifes in melee.

I was told that but tested on beta and did no happen, probably one of those ninja changes recommended by “pros”

yeah and ended being very unprofessional

I just think they are not casual AoE players and stick to much to AoE 2 basic mechanics/limitations instead of 3. Im not sure if I am right but I guess most of AoE 2 players would appreciate those kind of little details added to the game, there are many things AoE 3 did very well and better than AoE 2, most of actual players can relate. But I guess they think it is a sin to add those wonderful mechanics from AoE 3 because AoE 2 players might complain?

No editor or modding features on launch. And no I don’t trust a “roadmap” for adding them as they are often abandoned!

I think English archers switched to knifes in melee.

In AoEIII all ranged units switch weapons or animations when in melee. Some of them just start using their rifles as clubs, banging others on the head with the gunstock. It’s funny and interesting and you can immediately guess that this unit’s melee attack won’t be as powerful.

Oversimplified mechanics. They’ve overdone in an atempt to cater too much to newcomers, which will really hurt wide adoption by the core audience and the people who understand and play RTS games.

A close second is lack of basic RTS functionalities, which ties with the first point and its only purpose is to streamline the interface for newcomers.

Third is the game feeling unresponsive, be it the sluggishness of units or difficulties in clicking stuff.

The 2019 preview was fake. Game devs do this all the time.

It was an early build, not a fake.

Pretty sure it is taken out of the marketing team. Models, graphics design and skins are completely different.

I have no idea how anyone can think that footage released in 2019 with a release date set to 2021, which also disclaims that it’s early footage, isn’t subject to change.

There’s lot of things that bother me, and they mostly have to do with functionality (I can live with poor graphics and poor animationsc etc, but I can’t get over missing basic functionalities), but if I had to pick a SINGLE one most bothering aspect, it would be the lack of a proper UI unit selection box where units are displayed individually. This hurts my micro the most and annoys the hell out of me, as it did during the beta. It just makes it a pain to play, I just couldnt enjoy myself because of this alone, nevermind when you add the rest of the problems. So this would be my number 1 concern about AoE4.

A close second and also very annoying would be lack of proper custom hotkeys, especially nonexistence of “go to buildings X” hotkeys and “select all barracks/archery ranges etc” hotkeys that we got accustomed to from all AoE games.

In 3rd place would probably be the nonexistence of patrol function.

Now to other important mentions in no particular order: game has poor visual clarity - hard to tell what unit is what - same with buildings; no exclusive control groups that overwrite the ctrl group before; no global queue display on UI; minimap is hard to read; the fact that queued units are displayed individually rather than grouped (so they’ve done it the wrong way around for both UI selection box where they should be displayed individually instead of grouped, as well as queued units where they should be displayed grouped instead of individually, like what the hell were they thinking); no higher ground damage bonus; nonexistance of a small list of players in a corner of the screen so I can tell who is who (like we had before with the scores list); when you click other players unit - it wont tell you who that unit belongs too - it will just say “villager - English” instead of “villager - English - TheViper”; no unit stances; weird 4 selection box building setup instead of Basic/Advanced or Eco/Military; upgrades icons and unit icons look the same and are hard to tell apart; cant see market prices without hover; input lag; objectives are always visible even when irrelevant and take up too much space; camera zoom is too low.
There’s way more, but didnt want to mention bugs like game ends when host leaves game in custom game, or inability to see map after a game, or many others, as this are for sure mistakes rather than design choices.

And yes, what the hell happened with the game the way it looked in that footage from XO19? Proportions and everything were so much better. Why was it downgraded to this ugly state?

yeah ultimately they don’t have core and newcomers. Newcomers get aspirations and inspiration fore the core, todays newcomers and tomorrow’s core.

You clearly don’t understand. That wasn’t a game build, that was cgi generated by some video designer tool. Do you think the previews for games are always early builds?No,they are what some artist gets out of the design lead of the time.