Okay player colours and rotating buildings. Where are they?

Every other Age of Empires have had players able to pick their own colours. Yet Age IV doesn’t?
I love the gameplay, the factions, everything so far. But we are not able to pick colours, OR rotate buildings it seems like?! Why is this not a feature in the game yet?

I kinda feel like I post this suggestion because it is just a staple and I honestly hate the blue.

I share your sentiments exactly. I was hoping to be able to at least change my color to something other than baby blue.

As an aside, it would be a tremendous improvement if they just lowered the saturation of the colors - they would still “pop” as was intended but they wouldn’t look so cartoony.

Like AoE3 DE choosing your colours would be great! Also I saw orange (my favourite) in the campaign and it looks really dope. I wish I coudl play it.

This has been asked for numerous times so far, I’m disappointed it hasn’t just been put in still.

Being able to pick your own color is the closest we get to unit skins. Let the people choose!

I would love for them to add a ‘preferred ranked color system’ where you pick your first choice and then the game will try its best to give it to. If you chose the same color as your opponent it would do a coin flip and if you lost it would pick the second favorite color. and vice versa. I assume the game has a key bind toggle for allied colors and in 1v1 that would default to blue vs red.

this should have been implemented a long time ago, unfortunately ;(

Rotate buildings is not a good idea, Its a RTS, and we need identify the buildings easily. The Blue x Red is okay in 1v1, but 2v2 all enemies are red, which is bad.

You can fix the blue v red issue by turning off team colours, but it still assigns colours to players in a fixed order instead of letting you choose your own.

Hello, I agree, being able to choose our colors would be a good thing. I have no doubt that will happen.
Being able to rotate the buildings would also be a real plus. I like having the freedom to be able to rotate my buildings. This also makes it possible to optimize the space in which we build.
I am not convinced by the arguments, that it would be difficult to recognize the buildings if it rotated …

I’m with you on this as well. There needs to be that little, but meaningful addition to customization!

I’m on the same boat!

I like the idea of being able to select your own colours. Someone in this thread mentioned a priority tierd preference system that I liked!

With regards to rotation, I feel that identification of buildings is important, so keeping them consistent and not changing is better. Especially if we have so many unique factions as things might start to get confusing!

But perhaps allowing rotations for custom games and skirmishes are fine. I can’t see any issue with that as that protects ranked

If you guys go into settings YOU CAN CHANGE THE PLAYER COLOR. its something like “Unique player Color”. if you switch it to being on it gives every player (from your perspective anyhow) a different color while in the game. I don’t think you can pick the color however I believe it is random or a color is associated specifically with a specific civilization.

The color is assigned according to our placement in the team. Player 1 = blue, 2 red, 3 yellow, etc.

You can during a game switch between the player color or alliance color mod. You in blue, your allies in Yellow and the enemies in Red, with the “Insert” key on your keyboard.

Personally I liked the fact of being able to rotate its buildings, it would be necessary to be blind to confuse the buildings, Certainly each nation has a unique aspect, but the architecture always remains the same, as it has always been in the age of empire …
If the barracks for example were radically different I would agree with you, but I find that in the game the generic buildings all look the same despite the cultural appearance.

I hope, they will add color change and rotate buildings features, in next patch.

I am well aware of this but the only thing it does is makes the enemy have different colours and your own change based on team, it does not remove the baseline issue that team 1 will always be blue and you have no choice over the coloration.

You can actually rotate pastures and houses. These seem to be the only rotatable buildings (apart from gates and wall towers). Just push them against other buildings before building them and you’ll see what I mean. There is also 2 variations of houses. Press house hotkey you see one house. Escape and press it again you see a different house with a different garden/chicken enclosure layout. 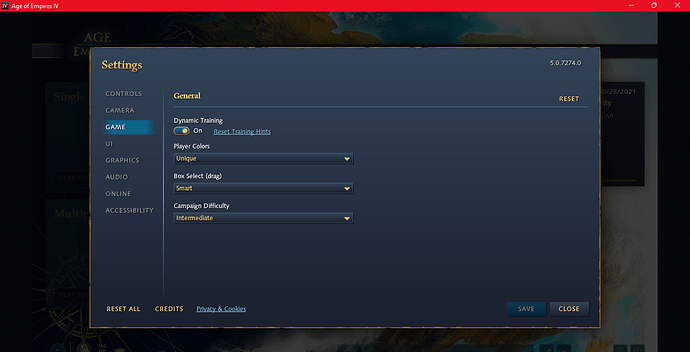 Age of Empires IV Picture of Player Colors1366×697 346 KB
See This is what I mean bro, in your settings you can change it so from your perspective it looks like 8 players have 8 different colors. However Unless Other Players change it in Their settings as well they will just continue to see The Blue/Red/Yellow. sure it will always be a baseline. But I prefer seeing 8 different colors.