I’m very good at closed team maps (let’s say I’m 2200 TG rating at that) and bad at open maps (around 1600 rating). I want to improve in open maps but I can’t as I’m matched against 2100 rated players and die before castle age each game. I am forced to resign all closed map games at the start of each game so my TG rating drops so I can compete in open maps with lower rating.

Can I be reported for this? If so, please fix this?

Oh great… so I can’t lose rating anymore? Bullsh!t matchmaking system. Matches me 3 games in a row against 3 premades with 3000+ rating smurfs. They were castle age with 200 pop knights on us before we even got to castle age. Nice matchmaking. Why can’t I lose rating???

Just let me play a normal game and not against the 3 best players in the world every single game. Jesus christ I’m just a noob who wants to learn this game wtf is this bullsh!t?

This is how you create trolls. 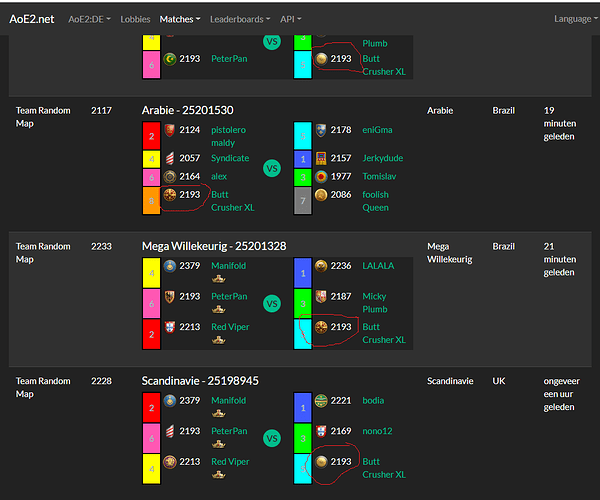 How to improve the multiplayer experience? II - Discussion

Having more than just one elo for 1v1 or team games is one of my suggestions in this thread. I fully agree your rating between open and closed maps can be quite different, so you need to be matched against other players. For team games there is also the issue of premades vs lonely players. Premades have much better communication and win against equally rated players in most cases. The current MM system seems to neglicts this. I fully agree the devs needs to change somethings at this.

If you really dont lose any points after loosing these games (sometimes aoe2.net is somewhat behind with ratings, so it is not the best source), then i would make a bug report about that. Loosing 0 points cant be true. I do feel there is something wrong with team game ratings in general (too much inflated). If you make a bug report, feel free to also link to the following thread. Maybe this will help the devs with finding the issues in some manner.

If i play against someone who drops multiple time in a row against me, then i will report such player. It is up to the devs if you can be banned for such thing. I would give you one advice: If you do something and you think ‘Can i be reported for this’, it is most likely something to avoid. Dont do it.

I also like you think all premade teams are 3000 rated smurfs. You know no one has a rating of 3000? Your rating is also pretty high. You know 2.2k is top 5% of the world. Don’t really expect easy games at that level. If your rating is that high, also expect to have high rated enemies.

And now I get +20 because 2 enemies disconnected… 2213 rating. Great. We even almost lost 2v4. They completely destroyed us 2v3 but our 4th teammate managed to boom and make the comeback. Fun fun fun.

ShadowWalker was great but that Zastosy guy was insane. TheViper on steroids. Why doesn’t he go for tournaments?

Okay, I will make the bug report.

Yes, the 3000 rating was an exaggeration. It’s my way of expressing a situation where all of my teammates had lower score than each one of our enemies. One guy (Red Viper) even had 5000 score when we were at 2500… I have never in my life been crushed this hard. I’m even considering that Red Viper might have cheated but it’s impossible to know or prove such a thing.

Also I don’t deserve to have this much rating. That’s my point. I’m not at all this good. The rating system inflates my rating. I’m slightly above average at best.

Yes, the 3000 rating was an exaggeration. It’s my way of expressing a situation where all of my teammates had lower score than each one of our enemies. One guy (Red Viper) even had 5000 score when we were at 2500… I have never in my life been crushed this hard. I’m even considering that Red Viper might have cheated but it’s impossible to know or prove such a thing.

You can re watch the game and see if why he had such high score. If he is really cheating, then you can report him and send your proof to the devs.

It would seem that the Persian boom is unstoppable on Scandinavia. No cheats were used that game. One ally lost half his population to a Mongols scout rush. I actually defended well against the Magyar scout rush (lost 3 vills for 5 scouts). It wasn’t until Persia attacked me that I fell behind. My third teammate consequently got completely wrecked by Persia as he turned his focus. Seems to me like a good old case of unbalanced matchmaking. And it’s probably all my fault because the system thinks I’m better than their 2 best players while I can barely go head to head with my weakest opponent.

I don’t want to punish premades. Yes, they only comunicated through pings so they were using voice chat, but their individual skill just outclassed ours by a great deal. They did seem to pick competitive civs for that map (e.g. Mongols, Persians and Magyars) whereas we picked rather fun civs (e.g. Portuguese, Japanese and Aztecs) but the difference in skill was still enormous.