Other RTS Game Features: What Worked and Didn't Work

Are there any features from outside the Age of Empires franchise that you would want to see incorporated, or feel like didn’t work well?

For instance, in Empire Earth 2, it was possible to use a picture-in-picture window to see two screens at once, which could let players quickly respond to alerts or monitor their base while controlling units elsewhere. Although I felt like this was great to have as a lower level player that can’t respond as quickly to alerts, I don’t think it would work as well from an esports perspective (it might be too busy for viewers).

I did like EE2’s citizen management system, which allowed you to assign villagers to a resource and let the AI handle the rest. You could right click a resource on the UI to untask a villager, and left click to drop them to another resource. They would move to the nearest of that resource available and start collecting it. You still needed to micro to place collection buildings, but it made quickly correcting economy issues while in a fight much easier.

It was also possible to create custom civilizations in that series, which is something I don’t want to see return in the same way. I like the idea of some civ bonuses being selectable (like in Age of Empires Online), but choosing all of them created a cookie-cutter meta of the best build possible selection that actually lowered variation. I would prefer a smaller civ list with different feeling civs.

EE2 expansion pack ‘the art of supermacy’ has a feature where you can rotate buildings while building stuff. The managment logs in EE series are spam. Then the status ox feature and the text detail box (when you put a cursor ony any unit or building) needs some improvement. Unit creation as usual more sluggish there must be upgrades or researches to boost unit creation. Overall the EE series had poor concepts on areas like games speed and the difficulty level, the graphcis design even in EE2 expansion pack is still very dossy.

Regarding varities it has much to offer in its epochs but less in unique units throughout those epochs. Then wonder varities are less avialalbe and less related according to historical culture of each civilization. Then there are no citizen stances where there must be an option where citizens can build stuff automatically to the number of stuff assigned to be built. Unit and building armor stats also needs to be mentioned.

There’s certainly a lot wrong with Empire Earth 2, but I bring it up because it had a number of new features at the time that haven’t become genre staples. I wanted opinions on the newer features or others that AOE doesn’t have to give a better picture of what the AOE community thinks of things that have been tried before and could possibly be included in AOE4. It’s been quite a while since I played EE2, so I don’t remember too many details…could you elaborate a bit on what you want from the management logs and hover text you mentioned, and maybe why it didn’t work or felt too much like spam for EE2? Is there any piece of information you would want added to the AOE series when selecting a unit beyond standard stuff (hp/attack/range/speed/etc)?

The border control system from Rise of Nations is another example of a feature that hasn’t been tried in AOE. In Rise of Nations, each building placed extended a visible border that allowed you to build buildings within. Eventually the borders would clash with your opponents and you could see defined areas of map control based on military movement. If a building fell outside a border of control, it took damage over time. I think this would be cool as a map option similar to deathmatch as a means of speeding up games, but don’t want it as a default setting in standard games. Borders limit what strategies are available to players, making tactics such as sneak buildings and necro slinging in team games impossible. I see the value in speeding up games and stopping players from dragging on a game indefinitely by hiding units about the map, though.

Several modern RTS games take out eco management entirely to focus on military. AOE has deathmatch for this, but I think it would be cool to have a resource-less optional mode where maybe you can build up to 10 (Farms? Town centers? Collection buildings) at once that automatically generate 10 of each resource per second, but can’t otherwise collect resources. This would be creating a game mode similar to how games like Battle for Middle Earth or Company of Heroes automate resource collection and allow players that want to focus squarely on micromanagement of military to have that option. A means of making an official version of ‘blood fest’ game modes from the old AOE2 days. Another way to do this would be to eliminate new units altogether, as the Total War series does. An initial point-buy system would allow players to spend finite resources on a military composition, then queue with that composition against other players for a standard match with only military. This could also be a great way for intermediate players to practice micro-management against different AI-controlled compositions. Again - pure military management is not what Age of Empires is about, but as an optional game mode, I would welcome it.

AoE franchise (of what I played so far AoE III and AoE II DE) it lacks territory features. There is no contrast with RoN’s excellence and realism anyway. The hilarious things of EE franchise is that it has poor concepts e.g. regarding population limit and diffculty featrues etc. Then diplomatic concepts are also poor, there is no option of peace other than allaince, in RoN there is an option of mutual agreements as well. When you select a unit or a building through a control in EE franchise it tooks a dozen clicks on the status that where it is located. Then menu features like idle citizen are not clearly visible. Then there is little freeedom in placemnet of strucutres. Then in EE and AoE you can’t sepratlely select military when nearby citizens are also in the range of select box. Unique units in RoN and AoE had histroical line through epochs which is absent in EE franchise. Overall there many stubborn glitches while selecting and moving a huge batch of troops through a certain direction.

Then in EE and AoE you can’t separately select military when nearby citizens are also in the range of select box.

I really like this idea, and often misclick economy units when selecting military in AOE2 DE. Being able to hold a hotkey and only select military in a box would be amazing, whether in AOE4 or the DEs of older games.

Tiberium Wars had a couple things I loved: units improving through verterancy, a “planning mode”, etc…

Honestly, both these could be added to an Age 4, as and possibly retrofitted to others. Unfortunately, retrofitting them would screw up balance.

If you play Protoss in Starcraft 2
You have to build your buildings in these energy areas.energy provided by these crystals,pylons. 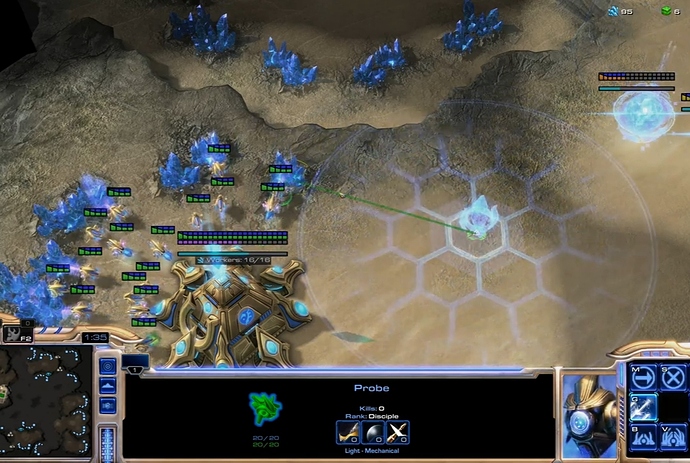 Thats a fine idea but i disagree with the maps implemantation. Better make it a unique mechanic for a civ…if there is some northern civ or even some desert nomad civ it could fit well.

EDIT: Also since i am a zerg player myself, please find the “real life” equivalent of creep spread to suggest that as well! Maybe Mongols or something do a scorched earth tactic that works like that? Gives their enemies a small speed debuff or some other small debuff!