After sending the shipment Palace Intrigue the “Arrival Flag Tech” doesn’t show up in the Mosque.

The “Arrival Frag” Tech Icon should be unlocked and appear as an option from the Mosque after Shipment “Palace Intrigue” is sent like the others do ie.: (New Order Infrantry and Topcu Corps) 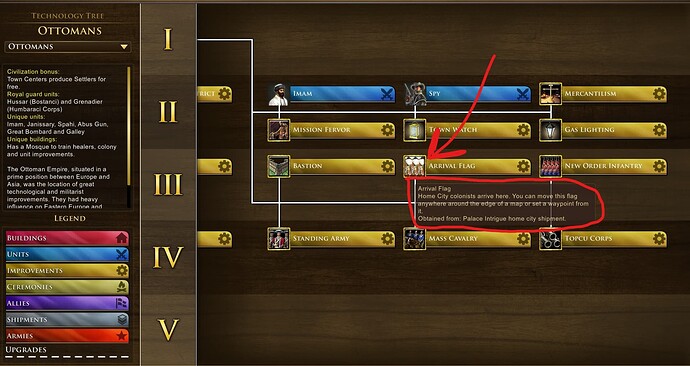 This tech doesn’t exist… It’s a bug of the tech tree.
The problem has been posted many times… but the devs always forget to fix it

Some typos III - Report a Bug

DESCRIBE THE ISSUE IN DETAIL (below). Limit to ONE issue per thread. Some typos in tech tree

How often does the issue occur? CHOSE ONE; DELETE THE REST. 100% of the time / matches I play (ALWAYS)

Well, at least I attempted

Ok thanks for this…

Though now the tooltip clearly says it requires the Palace Intrigue Card for the tech to be available in the Mosque.

But after sending the card the tech doesn’t show up!

Very strange!! Hopefully any devs can gives us a definitive answer.

they fixed Iman image though