Orange War Elephants, Hand Cannoneers & Halberdiers. All check the box for this being Persians…but then there’s the Elephant Archers, also in orange.

Either this is just something mocked up for the trailer. Or Persians are getting a new unit in a coming update.

Still wonder how they gonna work around with Cavalry Archers. Civs getting Elephant Archer means no Cavalry Archer. However Persians got well known history of using it

those are converted, or a starting unit in a campaign. Not uncommon to get otherwise inaccessible units in campaigns.

That doesn’t need to mean anything but it can be.
I’ll take it as a hint. They like doing small hints like this.
But considering that we don’t expect a DLC announcement any time soon, since the RoR DLC is not released yet.

It could be something in relation to the RoR DLC though. Persians in AoE1 have both Elephant Archers and Horse Archers.
But no idea what that could mean in relation to the AoE2 Persians, those units are clearly AoE2 units and not AoE1 ones.

It doesn’t mean nothing, that same trailer showed Chinese with Bombard Cannons and we’ll know that won’t happen never.

Unless that’s a secret hint for a China split.

LOTW trailer showed Sicilians with Bombard Cannons and Hand Cannoneers, and they don’t have it.

Maybe they were planned to have access to those units when the trailer was made?

Still wonder how they gonna work around with Cavalry Archers. Civs getting Elephant Archer means no Cavalry Archer. However Persians got well known history of using it

They could have changed the placement of the unit in the Archery Range?
That building is kinda crowded already though.

And you are indeed correct: https://www.reddit.com/r/aoe2/comments/10l9rlj/comment/j5xsmjj/?utm_source=reddit&utm_medium=web2x&context=3
It’s only a promo pic, folks.

The truth is known.

But if the CA and HCA of the Burmese, Khmer, and Malay could be replaced with EA and EEA respectively, it may be worth looking forward to. For this, the Howdah and armor bonus of Burmese could affect the EA, and the speed bonus of Khmer could become elephant units +10%/20% speed in the Castle/Imperial Age, and the discount bonus of Malay could also benefit the EA. Just saying. 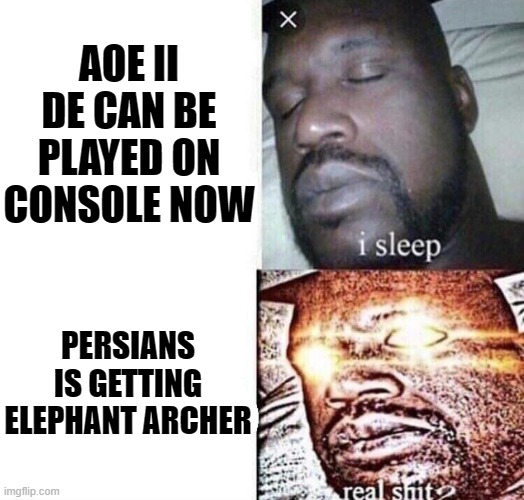 Burmese will be the civ which’ll get the best benefits out of EA. SEA civs won’t be that much op if they get one except Vietnamese. But still more relatively balanced. Vietnamese may become Archer + EA civ.

Persian getting EA won’t help them much because they have no bracer. If they ever give Persian another bonus (and they should have) and EA, It should be something like +1 range for CA and EA per age, starting castle age and Mahout also affects EA.

The Vietnamese are more like an East Asian civilization with BE.

The Vietnamese had professional horse archers in the history, and their bonus and UT would make EA too powerful. In short, The Vietnamese do not need and are not suitable for exchanging CA for EA.

they can rebalance UT always. In IRL they used Eles as range use mostly compared to Persians and Indians. Also can’t see any use of them using Horse Archery. Even horses itself.

I believe this is more of an eyecandy thing.

In IRL they used Eles as range use mostly compared to Persians and Indians. Also can’t see any use of them using Horse Archery. Even horses itself.

In any case, it’s more accurate and balance-friendly for Vietnamese to hold CA, which has nothing to do with Persians and Indians. On the other hand, other Southeast Asian civilizations could be closer to their military traditions with EA than with CA.

If they ever give Persian another bonus (and they should have) and EA, It should be something like +1 range for CA and EA per age, starting castle age and Mahout also affects EA.

To be honest, with regards to the Persian rework, I’d personally like to giving EWE +30% speed and then replacing Mahouts with something like “Zhayedan” or “Immortals” that cavalry return 15% of costs when dead, nothing to do with EA.
When people had discussed the Persian rework before, many ideas came up, but I hadn’t seen someone wanting to give them EA.

if I have to rework Persians then these are what should I do:

For Vietnamese, Chatras in past used to give +50 HP instead of +100 HP. It was made this way due to how weak their BE was. They can either revert to that or give 10% HP bonus on all Elephants. Getting access to Siege Rams even. I still don’t know why they shouldn’t get EA and CA swap while maintaining game balance anyway.

I still don’t know why they shouldn’t get EA and CA swap while maintaining game balance anyway.

“Vietnam’s mounted archers were first recorded in the 11th century. In 1017, Emperor Lý Công Uẩn of Đại Việt opened the Xa Dinh (archery school) in southern Hanoi and ordered all children of noblemen and mandarins to be trained in mounted archery. During the reign of Lý Thánh Tông, the royal guards had 20 horse archer teams, combined into 5 companies named Kỵ Xạ, Du Nỗ, Tráng Nỗ, Kính Nỗ, and Thần Tý, comprising about 2,000 skillful horse archers. They later effectively participated in the Invasion of Song China (1075 – 1076) and caused heavy casualties to the Song army. The Ly Dynasty’s horse archers also fought against Champa (1069) and the Khmer Empire (1125–1130) which both were victories for Đại Việt. Later, following the decline of the Lý dynasty, most horse archer teams were disbanded.”

Horse archery first developed during the Iron Age, gradually replacing the Bronze Age chariot. The earliest depictions are found in the artwork of the Neo-Assyrian Empire of about the 9th century BC and reflect the incursions of the early Iranian peoples. Early horse archery, depicted on the Assyrian carvings, involved two riders, one controlling both horses while the second shot.[citation needed] Heavy horse archers first appeared in the Assyrian army in the 7th century BC after abandoning char...

Culturally and militarily, Vietnam has always been more of an East Asian civilization than a Southeast Asian civilization.
Why bother to make changes when CA is more reflective of Vietnam’s history than EA.
Let the Burmese, Khmer and Malays have EA because they have relatively less record of using horse archers, and are relatively more famous for using elephant troops, especially compared to the Vietnamese.

Mahouts is replaced by Immortals. Makes their Long Swordsman population reduced by half like Karambits.

Didn’t had slave chained infantry? Also if I recall they had their own military tactics which made their infantry designed to fill up the space if someone on frontline dies on formation.

Perhaps Achaemenid Persians, but AoE2 is Sassanid Persia and beyond.

Think they fought Rashiduns with slave-chained infantry. Not sure if they still kept the military tradition in one way or another.