Revert the price back to the original amount. The current increased gold cost in return for less food cost is detrimental to the long term for the persians. If you’re going to reduce anything make it the food cost without increasing gold cost or reduce the gold cost and increase the food cost.

War eles are the ultimate unit for post imperial Arena/black forest TGs where trade is a thing so you can keep producing them, food can be solved with slinging res.
Check SOTL video about war ele cost change: The unit needed that.

Food is easy enough to gain in 1 vs 1 - however the gold in the long term is much harder to sustain, especially with the increased 10 gold cost dragging their end-game potential down a notch - you might get them out faster, but in the end you will have less of them unless selling res/relying on relics.

Should I ping you @BomberGriffin 11
War eles are hard to balance in 1v1 because there a chance to make them OP in both 1v1 and TGs
Also in 1v1 you don’t need to go for war ele, you have kamandabows, Knights with extra attack vs archers, Hussar, Heavy Camel and gunpowder, good options that can fit your playstyle at you ELO range (1k ELO).

I go for stockpiling and healing often war ellies x trashbows in 1 vs 1 with herbal meds, works well - especially when the numbers of war ellies increase in the long run while reducing losses to be very minimal. The increased gold cost is detrimental to the long term and slows down their endgame elephant stampede to be further into the game.

Yes, we shall unleash @BomberGriffin as our main means of attack on the argument as an actual player of the kinds of games that needed the cost increased to be balanced.

Food is easy enough to gain in 1 vs 1 - however the gold in the long term is much harder to sustain, especially with the increased 10 gold cost dragging their end-game potential down a notch - you might get them out faster, but in the end you will have less of them unless selling res/relying on relics

I actually have a good idea for this:

If it effects cav archers then they’d need an attack buff since they lack the last archer range/attack upgrade.

With that in mind for an alternative unique tech it may be much more efficient to have it effect something else - for instance:

Or to have it also effect cav archers

(If cav archers are going to have less range, they might as well gain an extra attack point)

Persians are the cavalry civilization, might as well give them a buff to reflect that beyond just having options.

Yeah. If the players use WE, they have to research Mahout. If they do not use, they never research.
No reason to separate WE and Mahout. Even making the elite upgrade costs higher by 300F 300G is a reasonable choice too.

Persians are the cavalry civilization

This following will be a perfect source.

The Immortals was an elite cavalry unit of the army of the Sasanian Empire with the alleged size of 10,000 men, similar to the Achaemenid "Immortals" described by Herodotus. The name is derived from a term used by Roman historians to refer to the unit. Armenian and Islamic sources also have allusions to elite unit(s) in the Sasanian army. The "Immortals" (Greek: Ἀθάνατοι Athanatoi) is a name used by Roman historians of the Roman-Persian Wars to refer to an elite unit of the army of the Sasanian ...

For the cavalry archers, just give them Bracer, and maybe remove the crossbow and reduce the cost of trash archer to 50 wood. The cost of Kamandaran may also get cheaper perhaps.

War Elephants are for boomingfest team games like michi/black forest. Or infinite resources games. The cost of War Elephants food was holding them back. It’s not a big deal when you have lots of trade carts in a team game. If let’s say War Elephants were much cheaper, they would be broken OP.

They not meant for a 1v1 machine-gun clicking pro games. They are meant for noobish boomfest team games. Where nobody rushes, and then War Elephants roll over everything.

And I’m the kind of guy who makes these units for scenarios. I feel like the base War Elephant from the game is not strong enough. If it was up to me I’d want elephants with bombard cannons on their back. Or Siege Onager Elephants. 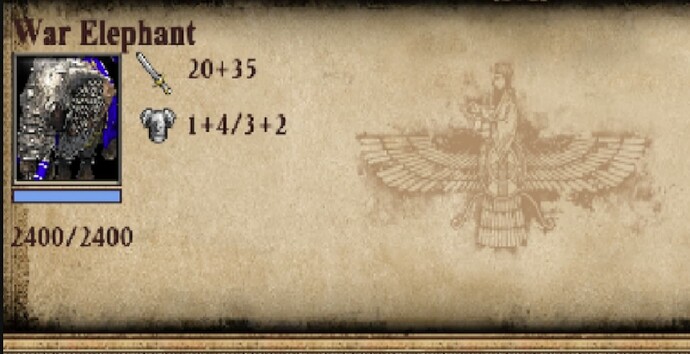 Funny thread lol. Not disappointed from opening it.

I have used War Eles a few times on Nomad TGs when I was bringing my TG elo up to speed and I could boom up to 180-190 vils and fships while my teammates held. The main bottleneck was, I can confirm, In the food cost. The stones for the castles too, but to a lesser extent. It’s just so so much, with Mahouts and Elite and everything. A final resort of my opponents then was a few monks and while that doesn’t stop it per se, I had to tech and make a few hussars to take proper engagements, which is even more food.

Also I wholly support the idea that Mahouts should be a default effect of Elite War Ele. The UT can instead used for something ranged, either the CA or the siege weapons, or something else that is funky.

… Maybe the same should happen with Logistica…

The UT can instead used for something ranged, either the CA or the siege weapons, or something else that is funky.

One could think about an imperial UT that gives +2 attack on CA; basically compensating for the lack of bracer for that particular unit. The resulting shorter range but higher attack compared to the default fully upgraded CA could be interesting to play around with, and we would finally see CA from the civ that is the closest (successor) to the actual Parthians…
The obvious downside is that we have plenty of CA civs already, and that it makes Persians probably a bit too versatile…

CA can now shoot while moving

On a more serious note, while Persians historically had good CA, their arsenal with FU halb, trashbows, FU huss and pala, gunpowder, now CA too… Maybe it’s too much. It’s not like they don’t need buffs, but still.

I’d rather see something with the way they shoot rather than how much damage they deal. Like a second Thumb Ring, or Parthian. “Archery range upgrades double the effect on Cav Archers” because I’m feeling lazy this morning.

Maybe the same should happen with Logistica…

I think it is a bit different.

If you only need a small number of Cataphracts for emergency, rather than using them as the main force, you can consider not research Logistica to use its high required resources first on other forces such as Arbalesters. Even without Logistica Cataphract still works well, with excellent bonuses against infantry. On the other hand, War Elephant is almost difficult to use without increasing the speed, and the Mahouts itself is quite cheap.

.
Immortals can be the new Imperial UT to make something like all the melee cavalry and infantry return about 20% of its food cost or return 10% of its cost once it is killed. Immortals were the troop that the member will be replenished or replaced quickly if the one is dead, seriously wounded or sick.