Can we have a discussion how the forum works on phone? It is horrible. Sometimes the field where you type vanishes under the keyboard. The names are not showing up correctly, and switching to desctop mode makes the browser horrible lag.
It is barely usable on phone, sinse im most time not home, and use the forum while im out, it’s sometimes really hard to answer or read topics °¬°

What phone and/or browser are you using? It works fine (I’m on mobile right now) for those we’ve been able to test on but there may be exceptions.

If you’re on iOS you might also try out the Fig app for Discourse and see if that works better for you then the web version.

I have the same problem, I can’t see what I’m typing because the keyboard covers it

I’ve tried Chrome and Firefox (typing this on Firefox) and they’re working fine. I’ll see if I can track down a way to test on or emulate your phone setup, though I’m not sure why it would behave significantly different. Are you using a 3rd party keyboard? In portrait or landscape mode?

Using stock installed keyboard, in portrait mode.
It doesnt happen always… But when it does, its unfixable… need to restart the app, and retype everything you typed

Also can I add a complaint about the insider emails text font colour, it’s totally horrible to read in my phone. Doesn’t look as bad on my PC, but then in my Gmail app, the colour is horrible.
Insider email text colour

Thanks for the screenshot (from @stevensaaron also), that’s helpful. We’ll check it out. Especially odd that it doesn’t happen all the time.

It might be due to using dark mode or something, but I’ll pass it on to that team.

You need to simply scroll down and the text box will eventually appear. Btw still oops 500 when i try log in on PC

Yeah eventually, but sometimes it just doesn’t at all

I had a similar or the same issue months ago, but they fixed it somehow, thankfully. I’m on an earlier version of Android than you and don’t use dark mode, but do use Firefox. Pretty sure Chrome had same issue for me.

Just wanted to mention because I think they eventually changed something in the web page’s coding to fix. Think it has been fixed since the February timeframe for me…There’s a chance one of the Firefox app updates eventually fixed it, but pretty sure it was AoE page coding being fixed

Composing messages from phone is still a tad clumsy and laggy feeling, in general, but it gets the job done

That means you are on desktop mode while on your phone. Reach out to the hamburguer menu on the top right, left of your avatar, and the last option there will be “Mobile View”.

No I don’t mean the browser-level desktop mode, but the forum software level. Check the forum hamburguer menu, and click on the last option there. 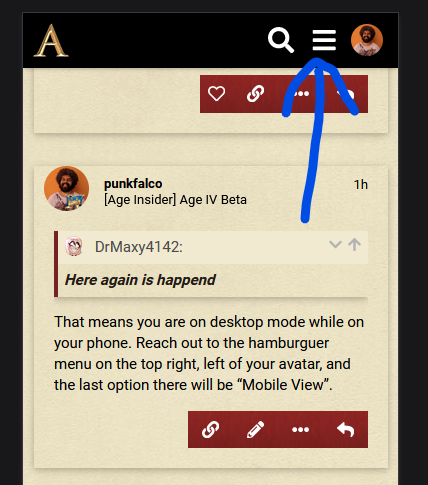 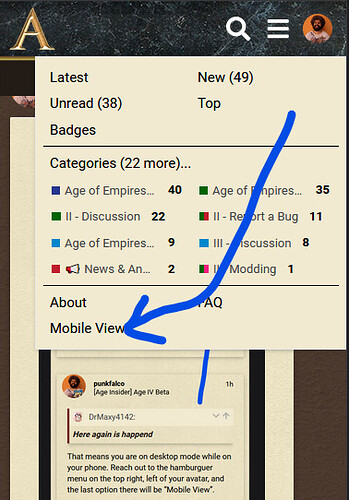 Wow. Just wow.
Thanks, why doesn’t this automatically trigger when you are on phone…

@DodoNotDoDo maybe there is something you can do about that xD?

Also @punkfalco have a heart, never noticed the button…