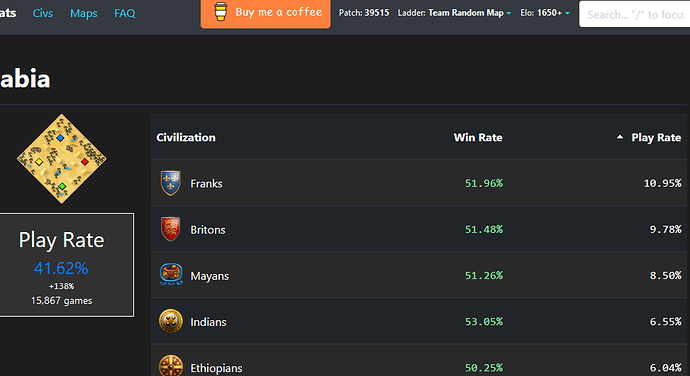 EIGHTEEN times more likely to face franks than turks, italians, or koleans… there’s definitely something wrong with the meta when its this incredibly stale…

for a rough comparison thats like having 19 friends and they all died except one, for people that cant seem to fathom the difference in pick rates.

italy not only has a UU team unit, but literally has a UT that ONLY works in TGs, yet they have the 2nd worst pick rate in TGs, like wtf …

Interesting Turks too are picked so little when they’re supposed to be a gold-dependent civ.

Also this puts the random-civ percentage at <21%, so it’s not just me who isn’t getting to use that option very often.

Well they put a lot of civs in the game that either nobody asked for, or people don’t know how to play yet. Combine this with the mentality that most people choose the “best” or “meta” civs rather than one that suits their playstyle/etc. and you have lopsided statistics.

EIGHTEEN times more likely to face franks than turks, italians, or koleans… there’s definitely something wrong with the meta when its this incredibly stale…

if you think this meta is stale, you should have seen what it was like before Forgotten

Water was pure vikings.
land was Aztecs, Mayans, or Huns.
i see far more diversity today then ever before. does it need more work? yes. but is it STALE? not at all.

This would be a very good reason to temporarily nerf Franks (and the other top civs).
I know @MatCauthon3 has proposed this idea before (I think applied to Mayans at the time).
It would also be a good reason to strongly buff Turks & Italians (and the other bottom civs); even if the buffs have to be reverted they would be positive by increasing the familiarity with these civs.

I know @MatCauthon3 has proposed this idea before (I think applied to Mayans at the time).

no my idea was to reduce the bonuses of top tier civs, and buff not top tier civs (and this is only after decent balance is achieved, which isn’t the case right now), to make sure we see more diversity that way. you will literally never get rid of meta civs. ever. no matter what.

all i would do is control which civs are meta and change them about every 9 months to a year.

I thought that’s what I said. Reduce the Frank bonus to force them into not-meta. Buff some not-meta civs to make them meta.

Once decent balance is achieved, there will be no below-mid-tier civs.
(I know this sounds impossible, but it’s how I’d like to interpret your statement. mid-tier being “it’s not meta but it’s still ok”. ie A/B tier. The alternative interpretation is to assign some civs to trash-tier and never touch them.)

There will always be meta civs but we can make Franks not-meta for a few months.

I thought that’s what I said. Reduce the Frank bonus to force them into not-meta. Buff some not-meta civs to make them meta.

i wouldn’t put franks in the same category i would as Mayans, Britons, Khmer, Aztecs, or Chinese.
but at most for Franks i’d probably nerf their foraging bonus slightly (to about 15%), and slightly nerf Chivalry (30%).

most for Franks i’d probably nerf their foraging bonus slightly (to about 15%), and slightly nerf Chivalry (30%).

Why? Franks are not overpowered.

Frank’s have been toping winrate and pick rates for years.

I agree with the above suggestion:
CHIVALRY NEEDS A NERF,

Why? Franks are not overpowered

Not at all overpowered in TGs. They are only picked 18 times more because people are patriotic. Nothing to do with balance

but at most for Franks i’d probably nerf their foraging bonus slightly (to about 15%), and slightly nerf Chivalry (30%).

Yeah i dont understand how they can have so much going for them. Either the Berry or the farms is already more than other civs have. Then we have free bloodlines, which literally just gets stronger as the game progresses.

And the fastest produced knights ever, meaning the possibility of fewer stables, and less resources tied up to get the same number of knights on the field.

Mofo 5 eco bonuses. And not one of them is questionable…

Then we have italians… Wow slow mofo clap. A miniscule food buff that doesn’t even match the Franks farm bonus by castle age. Nevermind all the other Frank eco buffs… Like wtf

Because my issue is specifically with TGs, even though Italy, turks and Koreans need a buff anyway.

I was thinking silk road needs a major buff.

Like a keshik. But the Italian ally gains the gold instead.

Obviously these can be toned according to balance. But seriously wtf is with a “team civ” that isn’t even remotely used in team games

Interesting Turks too are picked so little when they’re supposed to be a gold-dependent civ.

nothing to be surprised about, they lack arbalest and the switch to CA is hard, while also not being good as a pocket since they lack a powerful cavarly option.

land was Aztecs, Mayans, or Huns

Actually, after people discoverd how strong drush fc was, it was only aztecs and mayans (because they could counter aztecs with plumes 11). Huns were not as strong and they lost every time they faced a meso.

Anyway, back on topic. The problem with ranked tgs is linked with how the random options work. If 7 people have chosen random, the civs should be random, but the one dude who wants to play his civ force everyone to go back to meta civ. There’s no point in choosing subpar civ if your opponents go for the strongest options always.

@phoenix1089 btw, the problem with the stats you posted is that actually 1650+ tgs includes some really low elo players. You should see what arabia tgs look like at 2400+ elo.
Yeah, Franks are strong, but the fact Khmer (and to some extent even Malays lul) exists is still a big problem: battle eles are still way too strong even in castle age and most games can be ended with just 20 eles and your allies xbows pushing the enemy flank and simply destroying their base.
And even with eles civs out of the picture, there are still the indians that, assiming your flank hasn’t lost his xbows army, are the best pocket by far.
The big problem with this situation is that strong tgs civ are not necessarily strong 1v1 civs (eg. Indians) and by nerfing them you would make them even worse in 1v1

The big problem with this situation is that strong tgs civ are not necessarily strong 1v1 civs (eg. Indians) and by nerfing them you would make them even worse in 1v1

Exactly. Due to the nature of how tgs work there will always be some civs that outshine others because it’s perfectly fine for them to focus on one unit. Eventually, it’s an decision of what settings are to be prioritized for balance purposes. For some civs it’s simply not possible to have a perfect balance in both settings.

There are two separate problems:

Some civs are arguably too onedimensional. Not necessarily a problem though, and reworking them would definitely take some time. I think a better solution would be to powercreep the situational units a bit and also to give the weak TG civs some really good boni for TG and do the opposite for already strong TG civs so that they are better than the onedimensional civs in that regard.

It is interesting to notice that, except Indians, the civs which are not played are the same (approximately) for 1v1 on arabia. This is pretty bad, considering for instance that some of them should be played way more in TGs, for instance Turks.

Also I was expecting something better from Italians (they have a UT for TGs only plus a shared UU) and Koreans (they have extremely pop efficient units).

In some sense this is also a good thing, since a buff to the bottom civs will be useful for both TGs and 1v1.

Indians are clearly the exception, which should tell us that they do not need BEs, but maybe some other heps like arbs (someone has recently suggested free fletching).

I think the civs need to be balanced based on TGs rather than 1v1s. Some games are just rock paper scissors. That being said, temporarily nerfing anything is just confusing to the average player who might only play weekends during certain parts of the year.

Should Mayans and Franks be nerfed a bit? Probably. I’d like to more uniqueness in playstyles and not just best archer civ or best cavalry civ.

I’m not saying the bottom civs don’t need buffs, but maybe they can make more unlockable features (such as unit skins) for winning with a certain civ a # of times. There could be a regional theme every month to encourage that even… but making generic units more unique without changing the stats would be the best option imo.

I dont think the argument that the meta is stale because 10% of people only play franks all day makes sense. Franks are just a civ that many people like because they know about them as the typical medieval knight empire from europe, then probably also keep playing it because they have gotten comfortable playing them.
If we talk about the metagame, we should go by win rate, not pick rate.
And I agree that Franks should be nerfed right now because their win rate is huge (when including low level games), but I wouldnt be surprised if they are still in the top 3 picked civs once their win rate is exactly 50%

I think if any change is made, it should be less a direct nerf and more a nerf-buff tradeoff that makes it more complex to use the full extent of the Franks potential.

For example looking at the team random map 1650+ stats right now, indians incas and chinese are ahead of franks in winrate, but you are more likely to encounter franks than either of the three, most likely simply because most players have a western cultural background and are therefore more likely to be fans of famous european empires.

Turks are not a good arabia flank civ. They don’t have arbs and their HCA have a useless bonus in a situation where they should always have some meath shield in front of them.

They are not a bad flank civ, don’t get me wrong, but they are not as good as the three best arabia flank civs: brits with their extra range means it’s easier to avoid mangos and to start the engagement earlier, ethiopians fire faster (and since they have some sort of cavarly meatshield in front of their archers their bonus shines even more) and mayans have both cheaper (which means is easier to go on 3/4 archery and outmassing your enemy’s xbows) and siege (obsidian arrow can be davastating if you have the numbers and the tech advantage in the form of imp, or if you have won a fight and you want to destroy production buildings) xbows or their UU.

The same things I said above apply to koreans too. Furthermore, the WW, while really tanky, cost a lot, need a castle and are not as efficient as other units since they don’t need to tank damage, but only to fight.
At least italians have a good options in the GC that actually deals a lot of damage to cavarly, which is usually the enemy’s frontline too.

I’d like to more uniqueness in playstyles and not just best archer civ or best cavalry civ .

Man, we are talking about arabia. You go for cavalry civs as pocket because you need mobility since you are far away from you opponent and archers as flank since infantry get eaten alive by cavalry + ranged, and because having a ranged dps beahind a meatshield let you take more efficient fights