Placement of starting sheep not random in Random Maps

After playing a number of multiplayer games on the new patch, I noticed that my starting sheep were almost always in the same position relative to the town center (on the southeast, as in the screenshot). I tested some random maps with the scenario editor and found out that the placement of the 4 sheep (or 3 in case of cows and buffalos) is VERY OFTEN on the southeast of the TC, about 75% of the time. So it’s not as random as it used to be.

In the patch notes of the latest patch, I read “The placement of resources in random maps is no longer constrained to cardinal directions.”. I don’t know if this bug is related (and was introduced) by that change, because I don’t know exactly what it means.

I often found that the starting sheep were on the southeast of the TC for 6 out of 8 players. 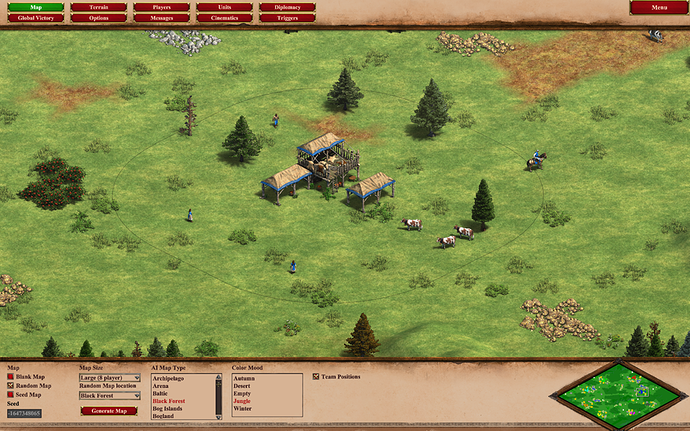 I can confirm. (Just tested it). Generated ~20 maps. ~60% was South East. The other 40% was North East. After some more testing around the 35th map was the first time the sheeps generated on the left side of the TC. Something is definitely going wrong.
As far as I tested (Arabia & Arena, 2p and 8p) for every player this is happening.

Side note: Only exception is the map Nomad. That seems to be working fine! /s

Another, probably related side note. Villagers always spawn on the opposite sides . So mostly on the North-West, South West part of the TC. Scouts and other resources seem unaffected.

The villagers are set to block anything from spawning within 2 tiles of them. Also they are set to spawn a min and max distance of 6 away from the center of your TC. When min an max are so close together, objects are biased towards being placed in the west. As a result, the villagers end up on the west, and the closest available sheep spots are towards the east. (and sheep are set find the closest available spot at is at least 7 tiles away, so they will end up on east when the villagers are in the west).

Is that new? The sheep are always in the line of sight when you start the game now, and you always have to move a villager or scout to get them. Earlier that was not the case, sometimes you had to scout to find your first sheep, and sometimes they were close to a villager/scout so you could move them to the TC immediately.

In other words, the position of your starting sheep is not as random as it used to be. I’m not sure if it was intentional or not, but I consider it a bug if the position is almost constant in a random map.

The changes in general were intentional. At least it is intentional that the sheep are always in line of sight. Their placement being less random is a byproduct of that.

Something else I’ve noticed is that if you spawn close to the edge of the map, two sheeps will often spawn in the tile at the very edge and in two tiles next to each other, making them hard to find.